The Office for National Statistics has today published a huge amount of data from the UK’s first annual national wellbeing statistics. This now gives us a base line to compare to in the future but today’s stats only serve as a snapshot. In the next round we can see who is getting more or less happy but for now, comparing people with each other is as interesting as it gets.

We’ve taken the raw data and made some graphs and charts to illustrate a few things we thought you might find interesting. Firstly, the type of job you do makes a big difference to how you rate your sense of wellbeing and whether you feel what you do in your life is worthwhile.

There’s a huge premium for people doing caring and working in leisure in terms of feeling like what they do is worthwhile. It’s also interesting that professionals are happier than managers.

But whether you have a job in the first place makes even more difference to how you rate your sense of wellbeing and whether you feel what you do in your life is worthwhile. 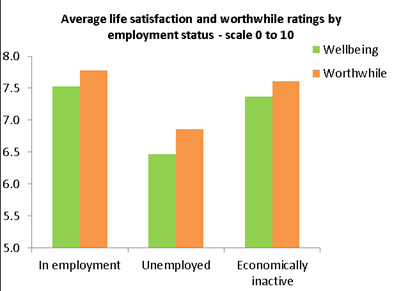 People living in different parts of Britain have different levels of life satisfaction. Looking at the average rating of satisfaction, we’ve made a table that shows the fifteen most, and the fifteen least satisfying places in Britain.

We were struck by how rural the most satisfied parts of Britain are and the extent to which the least satisfied correlates to areas of persistent poverty and deprivation.

We were also struck by the gender divide in that data. It shows that women have both higher life satisfaction and higher self-reported anxiety. Anyone would think that women take life more seriously than men. 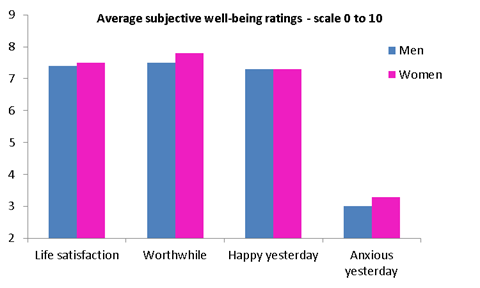 Finally, we were struck by the way that satisfaction and whether you feel what you do in your life is worthwhile changes with age. It seems that from your late teens until your mid-twenties it’s all downhill but life gets better until you hit forty. Then it plummets and its lowest during your 50s. Life “begins” again at sixty but then satisfaction falls again once you reach eighty.

So what? Well, we like graphs and charts and we’re interested in what the differences between people tell us about what we might do differently in future.

Over the past few months IPPR North and Carnegie UK Trust have been looking at other places that have sought to make wellbeing central to their approach. The UK is now at the vanguard of the debate about how to measure people’s wellbeing.