One of the longest-running campaigns in modern British politics is that for equal pay. As many have pointed out it’s over 40 years since the Equal Pay Act yet the gender gap still persists. The good news is progress – even if it is all too slow – is being made. The bad news is that the reason that progress is being made is due to male wages stagnating. 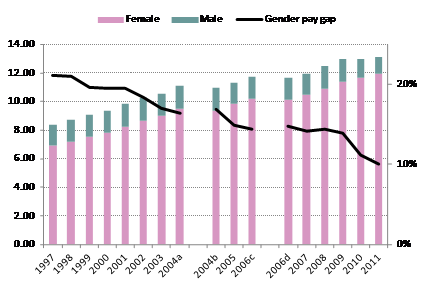 But first, let’s pause on what we mean by the “gap”. Typically the headline measure used (favoured by the ONS

Take age. There isn’t a pay gap for the under-25s, and only a pretty modest one for the under-30s. A larger gap starts to open up for those in their 30s, which then increases dramatically for those 40 and above.

Or look at part-time work, which is excluded from the headline pay gap figure. The part-time pay penalty affects millions of women, appears to be getting larger over-time, and, sadly, is bigger in the UK than anywhere else in the EU. There are certain types of jobs that tend to be offered part-time and they are concentrated in low-paying sectors. The result is industrial scale occupational downgrading following childbirth – 48 per cent of mothers on low to middle incomes take a lower-skilled part time job

There are, of course, many different reasons for the pay gap. And once economists consider some of the main factors such as skill levels, occupation, and time spent out of the labour market a chunk of the “gap”

How to interpret all this is a matter of some controversy. Those who want to dismiss gender inequalities often imply the “unexplained” gap is largely a mirage or a reflection of female preferences about the nature of the employment roles they want to undertake. Which is an account that entirely side-steps the crucial question of why it is that female-dominated sectors of our economy are so often afforded low status and low pay. I don’t think we can put this down to a series of coincidences.

The question of how much of the headline pay gap can be “explained” is often where these discussions about gender and pay end. Except they shouldn’t. Because vital though it is, on its own it doesn’t get to the heart of some fundamental changes in the nature of gender, work and pay – changes which are also showing up in the shifting nature of poverty.

For a start, if our eyes are trained solely on the headline pay gap we may miss the fact that the reason it continues to fall is changing. Throughout the late 20th century we got used to the idea that with a growing economy typical male wages should generally rise, and female wages should slightly outpace them as they catch up. There would be two rising tides, but the female one would rise faster.

Not now. The progress made on the pay gap over recent years has resulted from female wages climbing slowly while the typical man’s pay has flat-lined. This isn’t how it was supposed to be. 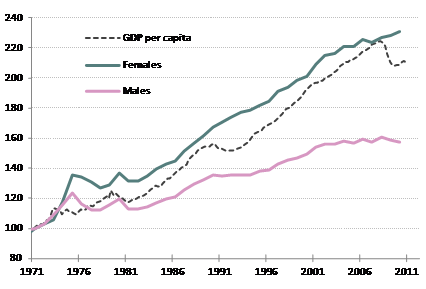 Dig deeper, as new work by Paul Gregg with the Resolution Foundation

We don’t know for sure what is behind these trends. But we do know that the pay inequalities within families tends to be self-reinforcing. Couples often arrange their affairs to benefit the career prospects of the highest earner – for instance, in terms of who opts to go part-time following childbirth, who does overtime, or indeed whose job prospects it would be worth moving house to further. These decisions tend to greatly magnify any pre-existing pay differentials within the family. In the past this would have overwhelmingly boosted men’s pay at the expense of women’s. But with the pay gap for those in their 20s having largely disappeared it may be that there is a growing number of households where these family adjustments are benefiting the mother.

Another possible explanation would point to the rise in part-time working by men – a longer term trend that has accelerated over recent years due to the sharp growth in under-employment. Perhaps there is a bit more equality in how the part-time pay penalty 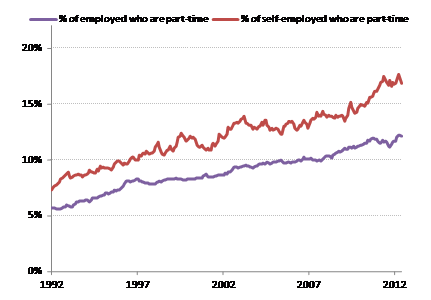 Whatever the cause, it’s pretty clear that the poor performance of men’s wages – particularly fathers – is closely related to another little noticed trend we see: the steep rise in poverty rates among “single earner couples” (the great majority of whom still have a male bread winner). This group now accounts for a larger share of overall child poverty than out-of-work lone parents. 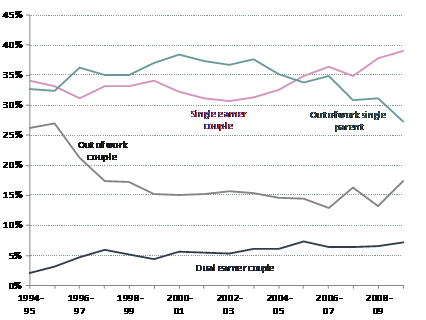 Like many things in politics it’s not hard to see how these shifting patterns of pay and family disadvantage could be used to help justify competing policy agendas. Some will react to the demise of the traditional male breadwinner family by claiming that this only reinforces the case for a transferable marriage allowance (let’s leave to one side the fact that many of these single earner couples won’t be married).

Alternatively, and for me far more convincingly, the pivotal role of female employment in securing rising living standards for low to middle income households, and the persistently low levels of child poverty in dual earning households, should be seen as a spur to a policy agenda that would increase the affordability of childcare, reduce the part-time pay penalty for women and men (by expanding higher quality part-time work) and favour welfare reforms that encourage rather than deter second earners (the impending universal credit is about to do the opposite).

Regardless of which of these views you favour, what should concern both sides of this debate is how little each has to say about the underlying cause of male wage stagnation – particularly among low-earning fathers and young men. That’s an issue everyone across the political spectrum should be focussed on. Yet silence reigns. So let’s rightly redouble our efforts to close the pay gap. But let’s make sure we close it the right way.