The Office for National Statistics has confirmed that the UK economy remained in recession during the second quarter of 2012 after output fell by a much bigger than expected 0.7 per cent. Real GDP has now fallen for three consecutive quarters and in five of the last seven quarters. Output is still 4.5 per cent lower than at its peak at the beginning of 2008. 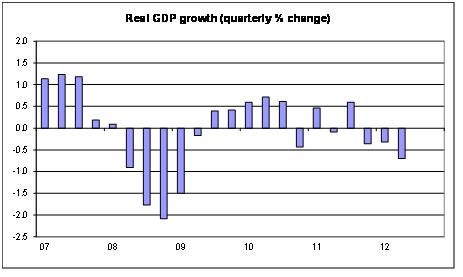 There were some special factors in the second quarter that will have affected output: the extra Jubilee bank holiday and the atrocious weather. But it is unlikely that they fully explain the fall. The underlying economy is performing far worse than the Coalition and most economic forecasters expected.

Clearly, this is no ordinary economic downturn. There are two facets to the UK’s economic crisis: a short-term lack of demand and a long-term risk that the supply potential of the economy will be damaged. Any set of policies designed to promote growth in the UK must recognise this fact and tackle both. Failure to do so is likely to result in a failure to achieve the desired outcome: a speedy return to economic growth and a rapid decline in the number of people who are unemployed in the UK.

Improving the supply potential of the economy will be futile if it means demand falls ever further short of supply. Boosting demand in the short-term without supporting the supply potential of the economy in the long-term would risk recreating the problems that led to the financial crisis and recession. What is required is a judicious mix of ‘Keynesian’ and ‘structural’ policies designed to reduce uncertainty in the private sector, particularly among businesses.

A recently-published IPPR paper set out details of the policies that should now be pursued. In summary, they are:

This will involve an increase in planned government borrowing the short-term, but this can be done without jeopardising fiscal credibility. The IMF, in its latest report on the UK economy published just last week said: “The UK has the fiscal space to make such adjustments.”

The coalition hoped that its deficit reduction strategy would boost the economy by creating greater confidence about the future, so leading to a surge in private sector business activity. After two years during which the economy has now shrunk by 0.3 per cent, this strategy has clearly failed. Indeed, the IMF estimate that fiscal consolidation over this period subtracted roughly 2.5 per cent from growth. Furthermore, the latest figures show underlying government borrowing in the first half of 2012 was higher than in the comparable period of 2011. A strategy based on deficit reduction is not even achieving its primary aim of reducing the deficit!

It is time to map out a new roadmap back to growth; one that combines elements of Keynesian and supply-side policies. A combination of both is needed to get the economy growing again in the next few years and to ensure growth is sustained well into the medium-term.