So, as we predicted, Spain got a bailout on Saturday. The mark for trouble – a five per cent spread between Spanish and German bonds – seems almost to be a self-fulfilling prophecy now. Spreads for Greek, Irish and Portugese bonds were over that level for 16 days, 24 days and 34 days respectively before they were forced into bailouts, but for Spain it took barely a week.

But the bailout came, the Spanish government was given a €100bn loan from the EU to shore up the troubled banks, and when the markets opened this morning, everything was good again! The IBEX, the country’s main stock market, started the day up 4.5 per cent: 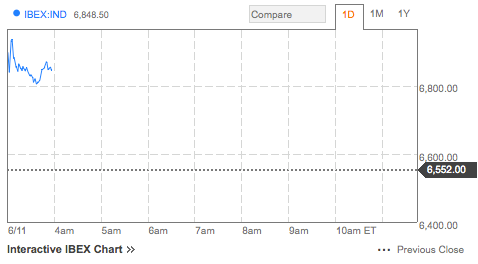 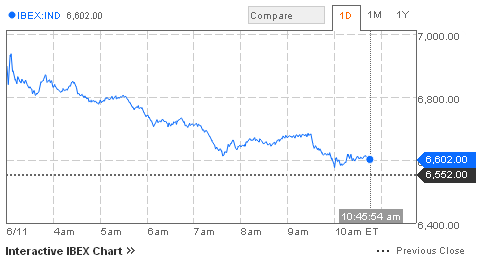 Even worse, Spanish bond yields are way up today:

The problem is that now that we’re up to four eurozone bailouts, the time taken to go from “everything has been solved” to “none of the fundamental problems have been addressed in any way” is measurable in hours.

Europe remains a continent with massive imbalances between the core and periphery, and no obvious way to undo the damage that causes. Germany is so much more competitive than Spain, let alone Greece, that in a full fiscal and monetary union, there would be near permanent transfers of wealth between the two – as there are, without raising a single eyebrow, between London and Bradford, or New Jersey and New Mexico.

In addition, although this bailout is aimed at protecting the Spanish banking sector from damage already done, it does nothing for damage yet to come. The Greek problem is unchanged, with the bank jog continuing steadily (modified chart via FT alphaville): 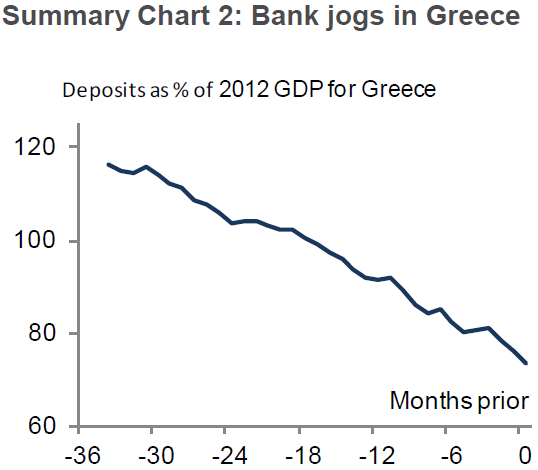 Such a bank jog can, if it continues unchecked, force Greece out of the euro without any political intervention needed. Paul Mason explained the mechanism in detail, but the basic issue is that eventually, the Greek banks will need to appeal to the ECB for further loans against poor capital. If the ECB, at any time, refuses to allow the loan limit to be raised, then the first bank goes bust at that moment. From there, either the jog becomes a run, and the Greek banking system shuts down, or the country imposes capital controls and de facto leaves the euro.

Of course, the fact that the bailout fails to address the fundamentals of the European problem is not to suggest that it does a particularly good job dealing with the surface issues, either.

It is still not clear, for example, what proportion of the loans are coming from the European stability mechanism (ESM) and what are coming from the European financial stability fund (EFSF). This matters because (it seems that) loans from the ESM would be senior to private market loans, while loans from the EFSF would be at the same level; in other words, the ESM money must be paid off before any other loan is, which is unlikely to make the private sector particularly eager to loan to Spain.

As if to emphasise the messy nature of that problem, though, Alphaville is now running a story suggesting that, since Spain already borrows from the EFSF, its loans from the ESM take a more junior status than if it didn’t.

It’s also not clear whether the money handed over to Spain is actually enough to dampen its banking crisis. Reports suggest that Spanish banks are, in total, exposed to around €400bn in dodgy property loans, so the recapitalisation may not have gone anywhere near far enough.

Oh, and Ireland is getting fidgety as well. Its bailout – way back in November 2010 – happened for much the same reason as Spain’s. An overextended banking sector exposed the whole country to risk which it had to ask for help for, but the government was, overall, fiscally responsible. Yet because it needed European funds before the EFSF had any powers narrower than a full-scale bailout, the money came with onerous terms which have not been matched in Spain’s case. So Ireland may now be feeling hard done by, and attempt to renegotiate its own terms.

It’s looking more and more likely that the EU has just flushed €100bn down the drain.