The last time a letter left on a desk caused such a stir it involved an exchange between two senior politicians about the future of the country’s finances. This time the note was from a group of Whitehall cleaners to Iain Duncan Smith asking him to make good on his commitment to make work pay and make his department, DWP, a living wage employer. The fact that it so caught the public mood says something about how the question of low pay has risen in salience.

This is in no small part due to the success of the living wage campaign, a grass-roots movement formed just over a decade ago, to push for a decent wage – above the minimum wage – for workers. It has helped shine a light on the rising problem of in-work poverty. In an era when there are many structural forces bearing down on low pay – from shifts in technology and trade to the continued demise of collective bargaining and the real terms falls in the minimum wage – the momentum behind the campaign for a living wage is a rare example of at least some countervailing pressure.

Yet for all the verve and campaigning success it is still the case that only a relatively small number of people are getting paid a higher wage as a result of working for a living wage employer. For example, in London it is estimated that around 650,000 employees are paid less than the London living wage (£8.30 per hour) yet only around 10,000 have gained an accredited living wage since 2005. Look at the national picture, where a total of six million employees are being paid less than a living wage, and the scale of the low pay challenge becomes clear.

None of which is to say that progress has not been made – thousands of low-paid workers will attest to the difference a living wage has made to their lives – just that the living wage faces a difficult set of challenges as it comes of age.

First, there is the need for the living wage to reach out beyond the public sector and the select parts of the private sector (relatively small numbers of high-profile financial and legal firms) where it currently resides into more mainstream employers. So it is timely that a new report  from the Resolution Foundation and IPPR estimates the impact on the wage bill of large firms across different sectors and challenges some prevailing assumptions. In key sectors like banking, construction, food production and communications – where roughly a million people in total work below the living wage – the typical impact of paying a living wage on the wage bill of large employers is pretty modest at around 1% (and that assumes a knock-on effect on wage differentials for those earning above the living wage). 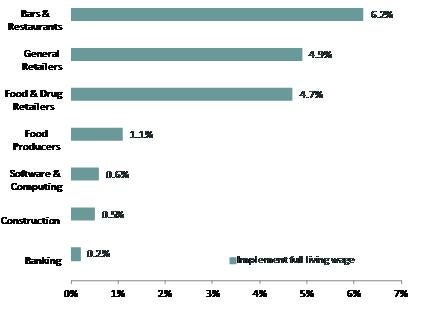 Of course, the precise cost of a living wage will vary from employer to employer but figures of this size should be absorbable.

Second, is the need to make real progress beyond London where the campaign has traditionally been anchored. The US experience shows how campaigns can move quickly from one city to another, as was the case when the living wage movement first succeeded in securing a higher wage floor in Baltimore in the early 1990s and then quickly spread elsewhere. In the UK we’ve seen the emergence of many new city initiatives over the last year or so – Sheffield, York, and Newcastle have all set up Fairness Commissions following on from the experience in Islington – with the aim of promoting fairer pay across local public and private sectors. It remains to be seen what these processes will achieve but so far it appears that a healthy degree of civic competition is proving a useful spur – and the newly expanded base of Labour-led authorities is only likely to generate more interest.

Third, is the need to ensure that being ambitious about the potential of the living wage doesn’t mean being unrealistic about tax credits. Contrary to what many think (though not the main campaign groups) the living wage is nowhere near high enough to ensure a typical household with children can live independently of state support: indeed the level of the living wage has always been premised on full take-up of in-work tax credits. If it didn’t then the London living wage, for example, would rise from £8.30 an hour to an eye-popping £10.40.

Finally, there is an unresolved conundrum, both for campaigners and sympathetic politicians, as to the role government should play in expanding coverage of the living wage. This is about philosophy as much as policy. Pure voluntarism, which has been the essence of the campaign to date, may well mean relatively slow progress. Too much statism, for instance through calls for legislation – effectively replacing the minimum wage with a living wage – or expensive tax incentives for employers, would, however, contravene the character of the living wage campaign which has been rooted in a civic process to get employers to take responsibility themselves for paying a decent wage on ethical grounds.  The chasm that exists between relying on moral suasion on the one hand, and top down legislation on the other, needs to be better explored.

While these challenges are real, they all arise from rare success. The living wage is an idea that chimes with the times, allied to a label that works, rooted in a progressive argument that doesn’t rely primarily on more state spending. And that puts it in a very small category indeed.