Investors are turning to real physical assets like commodities and real estate in London and, it seems, anything that is not euro-related. London real estate and (in our view unjustifiably) the UK has largely continued to hold onto its “safe haven” status. London’s [real estate investment trusts] today trade at a nil discount to net asset value and have almost been accorded “gold status” with 2.0 per cent dividend yield (uncovered for some) where you can get a 6.4 per cent yield from real estate names on the continent (and a 17 per cent discount).

In other words, following similar logic to that outlined by Jonathan Portes, investors are fleeing from risky assets like the stock market, and turning instead to things with a relatively guaranteed base – like real estate.

Most of the attention has been focused on the effect this phenomenon has on Britain’s gilts; not only Portes, but also Cormac Hollingsworth at Left Foot Forward, have addressed the fact that it is this flight from risk, not any particular “credibility”, which lowers gilt yields. But the flight to safe capital has also skewed some other markets. Weisenthal picks out this chart, comparing the performance of the FTSE 100 to Great Portland Estates, one of the nine British REITs: 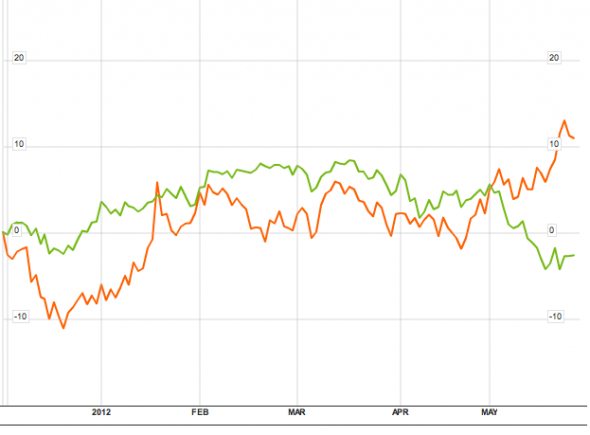 The divergence is clear from mid-April onwards. But it’s not only REITs which are benefiting. We reported yesterday that house prices are up nationwide, driven largely by rises in London, and there are reports of increasing numbers of Greek and Spanish buyers in the capital. The London real estate market may be borked for some time yet.