A big switch appears to have been flipped in the last week: talk of Greece exiting the Eurozone has moved from wild blue-sky thinking to the sort of thing Very Serious People write about. The Financial Times is running a series on how such an exit would happen, beginning today with a piece quoting several Eurozone central bankers saying things like:

I guess an amicable divorce – if that was ever needed – would be possible. (Luc Coene, central bank governor of Belgium)

Technically, it [a Greek exit] can be managed… It is not necessarily fatal, but it is not attractive. (Patrick Honohan, Irish central bank governor)

Bloomberg echoed the statements, while Der Spiegel is running a cover that doesn’t really need translating: 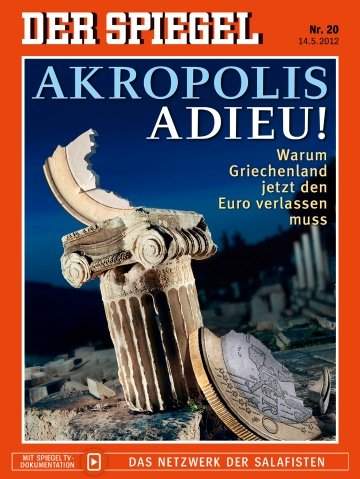 The macroeconomic issues with a Greek exit – a Grexit – would be immense. Paul Krugman lays out a convincing four-step guide as to how the whole thing could result in the end of the Eurozone, “and we’re talking about months, not years, for this to play out.”

Krugman sees a Grexit leading to massive capital flight from Spain and Italy as savers race to move their deposits to Germany. That leads to either capital controls to prevent the exit, or massive (even in the context of those which have already happened) European Central Bank loans to stop the banking systems of those countries failing. Germany then has a choice. Either it becomes a guarantor for Spanish debt indefinitely, while also tolerating a higher level of Eurozone inflation than it has ever been willing to accept before; or the Eurozone breaks up.

Even the smaller issues with a Greek exit are hugely difficult to overcome, though. Currency swaps are normally done with huge levels of planning, and a long period of both currencies running in tandem to enable things like vending machines and electronic systems to switch over. But because the devaluing of a new Drachma would be so strong so quickly, Greece has no real chance to do this. If it decides to leave the Euro, it needs to get it over and done with in very little time.

Last September, Josh Hempton, a hedge fund manager, looked at the closest historical precedent for this high-speed currency swap: the break-up of the Austro-Hungarian Empire:

What they did was put troops on all the borders and made it illegal to take cash (or wire cash!) across borders. Then all Austro-Marks in each country was stamped – converted to Drachma for Greece, Marks for Germany, Peseta for Spain or whatever the currencies of the day were [If someone remembers the 1918 border splits better than me they are welcome to say…]

If you are going to split the currency I see no alternative to a big bang – and if you do that I see no alternative to troops at the border stopping transfers (and wire transfers) because shifting cash North looks so profitable against a sudden devaluation. Suddenly – and against all historic hope – its time again to guard the French-German (and every other European border) with troops for a week whilst the money is stamped.

Despite the fact that at every stage, the story of how the Eurozone will collapse is credible, there is a peculiar sense of optimism. As Joe Weisenthal writes, though, the thinking seems to be:

A crisis will be averted because to not avert it would be such a disaster. We’ll see if that actually holds up.