Maria was born in Paros in 1942. The country was under Nazi occupation. She experienced real fear, real poverty, starvation, bomb raids and executions. She survived the war and went to a Catholic girls’ school. Maria was good at sport and an excellent singer. She left school top of her class, got married, started working for the Archaeological Museum in Mykonos, from where she retired 44 years later at the age of 64 – one year before she was officially supposed to – in order to look after her husband who was dying of pancreatic cancer.

There are millions like her. She is a typical lazy, feckless Greek woman.

Here is the first myth: This crisis is made in Greece. It is not. It is the inevitable fallout of the global crisis which started in 2008.

Are there features in the Greek economy which made it particularly vulnerable? Yes – there is rampant corruption, bad management, systemic problems, a black market. All this has been explored ad nauseam. There are other factors, too; rarely mentioned. The crisis came at particularly bad time for Greece – four years after this tiny economy overextended in order to put on a giant Olympics and prove to the world it had “arrived”. When the crisis came, the country lacked the monetary and fiscal mechanisms to deal with it, because of its membership of the single currency.

However, all of the above are contributing factors – nothing more or less. The catalyst was the behaviour of the financial sector after the crisis. Here is what Angela Merkel had to say in February 2010, when the “Greek problem” started to rear its head, as reported by Bloomberg:

German Chancellor Angela Merkel criticized market speculation against the euro, saying that financial institutions bailed out with public funds are exploiting the budget crisis in Greece and elsewhere. In a speech in Hamburg, she hit out at currency speculators, who she said are taking advantage of debt piled up by euro-area governments to combat the financial crisis. “The debt that had to be accumulated, when it was going badly, is now becoming the object of speculation by precisely those institutions that we saved a year-and-a-half ago. That’s very difficult to explain to people in a democracy who should trust us.”

And since it was difficult to explain, it appears, she gave up trying.

The crisis is a financial one. It is not. It is a political crisis and an ideological one. The difficulties of an economy the size of Greece (1.8 percent of eurozone GDP, 0.47 per cent of World GDP according to 2010 IMF figures) should hardly register as a blip on the global radar.

The primary reason for the widespread panic is the interconnectedness of the banking sector – the very same systemic weakness which caused the domino effect in 2008 and which the world has collectively failed to address or regulate.

The secondary reason is the eurozone’s refusal to allow Greece to proceed with what most commentators have seen as an inevitable default for many months now.

Both these factors are down to political decisions, not sound fiscal policy.

Greeks are lazy. This underlies much of what is said about the crisis, the implication presumably being that our lax Mediterranean work-ethic is at the heart of our self-inflicted downfall. And yet, OECD data show that in 2008, Greeks worked on average 2120 hours a year. That is 690 hours more than the average German and 467 more than the average Brit. Only Koreans work longer hours. The paid leave entitlement in Greece is on average 23 days, lower than the UK’s minimum 28 and Germany’s whopping 30. 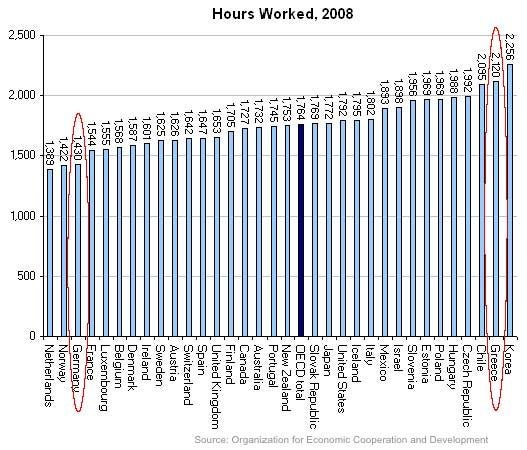 Greeks retire early. The figure of 53 years old as an average retirement age is being bandied about. So much so, that it is has become folk-fact. It originates from a lazy comment on the New York Times website. It was then repeated by Fox News and printed in other publications. Greek civil servants have the option to retire after 17.5 years of service, but this is on half benefits. The figure of 53 is a misinformed conflation of the number of people who choose to do this (in most cases to go on to different careers) and those who stay in public service until their full entitlement becomes available.

Looking at Eurostat’s data from 2005 the average age of exit from the labour force in Greece (indicated in the graph below as EL for Ellas) was 61.7; higher than Germany, France or Italy and higher than the EU27 average. Since then Greece have had to raise the minimum age of retirement twice under bail-out conditions and so this figure is likely to rise further. 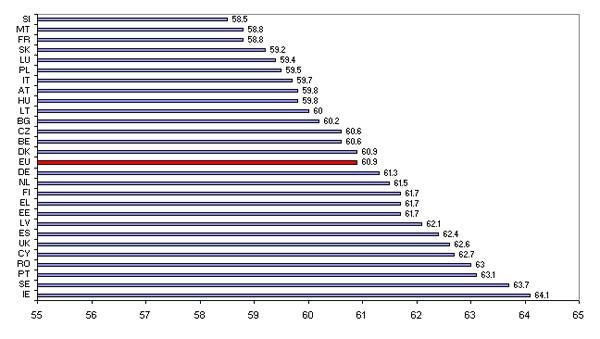 Greeks want the bail-out but not the austerity that goes with it. This is a fundamental untruth. Greeks are protesting because they do not want the bail-out at all (or the foreign intrusion that goes with it). They have already accepted cuts which would be unfathomable in the UK. There is nothing left to cut. The corrupt, the crooks, the wicked, our glorious leaders, have already transferred their wealth to Luxembourg banks. They will not suffer. Meanwhile Medecins du Monde are handing out food packages in central Athens.

Greece’s total annual deficit is €53bn Euros. Of that, our primary budget deficit is, in fact, under €5bn. The other €48bn is servicing the debt, including that of the two bail-outs, with one third being purely interest. Europe is not bailing out Greece. It is bailing out the European banks which increasingly unwisely gave her loans. Greece is asked to accept full responsibility as a bad borrower, but nobody is examining the contribution of the reckless lenders.

Western politicians have developed a penchant for standing on balconies and washing their hands like Pontius Pilate; lecturing from a great height about houses on fire with no exits. This conveniently draws a veil over the truth – that our house may have been badly built, but it was the arsonists of Wall Street and the Square Mile that poured petrol through our letterbox and started this fire.

Nassim Nicholas Taleb is the Lebanese-American philosopher who formulated the theory of “Black Swan Events” – unpredictable, unforeseen occurrences which have a huge impact and can only be explained afterwards. Last year he was asked by Jeremy Paxman whether people taking to the streets in Athens was a Black Swan Event. He replied: “The real Black Swan Event is that people are not rioting against the banks in London and New York.”

Maria has never dodged a tax in her life. She doesn’t drive a Porsche or own a yacht. She hasn’t voted in ten years – “they’re all the same”, she says, “liars and crooks”. Her pension has been cut to €440 Euros a month. Her benefits have not been paid in almost a year. She faces the same rampant inflation that we do. She is exhausted, but not defeated.

Maria grows as much fruit and vegetable as she can in her small “pervoli”. She keeps chickens so that her grandchildren can have the freshest eggs. She still sings beautifully. She battles daily with Alzheimer’s, looks at pictures of her late husband and smiles, sits at her sewing machine, still, and modifies the same old skirts.

There are millions like her. She is a typical strong, defiant Greek woman, my mother.