In April 2014, shortly after Russia had begun the process of annexing Crimea, the chief executive of BP, Bob Dudley, travelled to Moscow to take part in a meeting of the Russian Geographical Society — an organisation whose board of trustees was led by Vladimir Putin.

Before the meeting, reporters asked Dudley whether, given Russia’s behaviour in Crimea, he would consider severing BP’s ties with the country, where it held a large stake in the state-owned oil firm Rosneft. Dudley was uncompromising. “For us it’s business as usual,” he said. “We’ve got a 19.75 per cent stake, it’s a good stake, we are happy with that stake, it’s a very substantial stake and so [we’ve] no plans to change that.”

Eight years later, as Putin began his full invasion of Ukraine, BP’s reaction was radically different. The company has a new boss, Bernard Looney, an Irish electrical engineer with a master’s in management from Stanford University, who was trying to take the company in a new, cleaner direction. Since taking the reins of BP in February 2020 Looney has refocused its strategy towards decarbonisation, announcing plans for it to become a net-zero company by 2050.

Within hours of Russian tanks entering Ukraine, Looney had convened his team to discuss the Rosneft stake. He “made it clear… that he saw the investment as untenable”, according to Reuters. 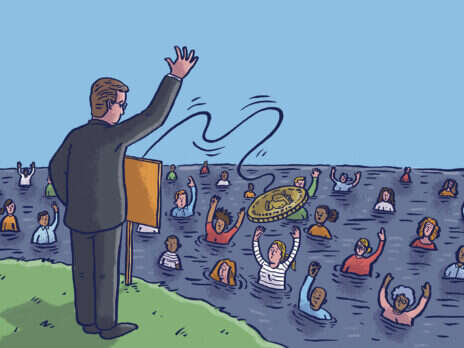 By February 27, three days after the meeting, BP had announced plans to exit its shareholding in Rosneft. The stake was valued at about $14bn, BP said, and it expected another $11bn charge related to the change. That’s $25bn in total, roughly a quarter of BP’s $100bn market capitalisation, that, in the absence of an obvious buyer for the stake, the company is essentially writing off. Looney and Dudley both resigned their seats on Rosneft’s board. “There was only one decision we could make,” an unnamed executive told Reuters. “Rosneft was dissonant with our strategy.”

BP’s decision was ground-breaking. It took investors by surprise — shares closed almost four per cent lower the next day. It also took its rivals by surprise, putting pressure on the likes of Shell to exit their own holdings in Russia.

Hundreds of other companies began to follow suit, at first slowly and then in their dozens. By March 10, two weeks after the invasion began, a list compiled by Yale researchers showed more than 300 brands had pulled out of Russia: from McDonald’s and Nike to H&M and Chanel. What was unusual was that these companies were acting without the usual pressure from governments and consumers. Dozens, like BP, had got out before their governments had issued sanctions against Russia.

Countries must be extremely cautious in their relations with a despot who controls the world’s largest nuclear arsenal, but the private sector has been waging economic warfare on their behalf, depleting the Kremlin’s resources and countering its propaganda by removing consumer goods from the Russian economy.

Roger Barker, director of policy and corporate governance at the Institute of Directors (IoD), says that there is little precedent for such an exodus of brands from an economy. In the 1970s, when dozens of companies pulled out of South Africa during apartheid, they did so in response to consumer boycotts. This time companies have been quick to get ahead of their customers’ demands. The speed of the response surprised Barker — and it may have surprised the Russian president. “Putin has banked on the fact that there’s an inherent dislike within the West to disrupt business as usual, to actually face up to the reality of what’s happening,” he says.

Tom Keatinge, director of the Centre for Financial Crime and Security Studies at the Royal United Services Institute, was also taken aback by the speed of the withdrawal. “I thought there would need to be more of the Foreign Secretary saying, ‘Businesses need to decide whether they support good — you’re either with us or against us,’” he says.

In the context of the past few years, however, it makes sense. Businesses that once eschewed politics now openly engage with issues and sell themselves on their values. This change was accelerated by the pandemic, which showed businesses the power of joining a “war effort”: as lockdown descended, supermarkets encouraged people to restrict their panic-buying and oil companies encouraged people to travel less. These were hardly profit-maximising messages, at least in the short term.

The pandemic forced businesses to “look into a more value-driven system, rather than a profit-driven system”, says Daphne Biliouri-Grant, the senior environment, social and governance (ESG) adviser at the risk intelligence firm Sibylline. “This is not how they’ve always functioned. Profit was a top priority.”

Political movements that gathered pace during the pandemic, such as Black Lives Matter, have also made brands a lot more comfortable about getting behind messages they might have avoided in the past. That’s had a knock-on effect on consumers’ expectations. “The consumer is becoming much more self-aware, more conscious about what they’re buying. They expect more transparency, more accountability,” says Biliouri-Grant. “It has created this tipping point, where the business community now feels, ‘OK, I need to respond to that, because I will cease to exist as an organisation [if I don’t].’” Being perceived to respond quickly to crises provides “a competitive advantage”.

It wasn’t just altruism that pushed companies to leave Russia. Many were correctly anticipating sanctions that would in any case have made it impossible to do business there, while others may already have been looking for reasons to sever ties with the country. The fast-fashion retailer Asos, for example, has been struggling in Russia for some time, and reported a 5 per cent drop in demand in 2021. Oil majors, too, may have been after an excuse to divest from the country as they sought to move their focus away from hydrocarbons. “I think many of them are realising being in Russia has as much risk — more risk, probably — than being out,” says Andrew Crane, the director of the Centre for Business, Organisations and Society at the University of Bath.

But much of the exodus seems to be driven by a sense of genuine responsibility — not just towards Ukraine, but also their employees in Russia. “A lot of companies had to suspend their operations, but they also are very much aware that they have thousands of people who depend on them, and they continue to pay them,” says Biliouri-Grant. Ikea and McDonald’s are among the companies that have shuttered their operations in Russia but are continuing to pay their workers there.

This response has proved to be convenient for Western governments, offering a swift, highly visible and relatively safe reaction to a conflict in which direct intervention comes loaded with the risk of still greater conflict.

For Crane, however, the choice to take a stand against an unambiguously immoral leader seems like the obvious one for businesses, even when it means forfeiting billions in market value. “[Businesses] don’t want to look back and be the firm that supported the Nazis,” he says. “They want to be on the right side of history.”