Anthony van Dyck, as with Hans Holbein a century earlier, was the foreign-born painter who gave an entire English age its image of itself. It is to Van Dyck (1599-1641) that we owe our visual conception of the Caroline haute monde and, what’s more, so pervasive was his languorous, insouciant and glamorous depiction of mid-17th-century nobility that it became the default mode of society portraits for succeeding centuries. The swagger portraiture he perfected did not, however, work its spell on everyone: the critic Roger Fry, for example, dismissed Van Dyck’s portraits as merely: “the last perfection of furniture for the drawing-rooms of the great”.

Had Fry looked harder and reined in his Bloomsbury snootiness, he would have seen that one of the traits of Van Dyck’s portraits that was so transformative was his use of landscape backgrounds. He freed his subjects from the interiors of their palaces and grand houses and ranged them with the natural world as their backdrop, seductively packaging his clients as masters and mistresses of the world, both inside and out: the woods and parklands were their possessions and natural domain too.

The pastoral had played a part in existing British art. Nicholas Hilliard, for example, had shown the most sensitive young men of Elizabeth I’s court in rose bowers or gardens. But for Van Dyck it was artistic mother’s milk. He was born in Antwerp – then at the heart of Habsburg Flanders – and grew up and trained in a culture where landscape painting was a prized genre of its own. There was no comparable British tradition.

Van Dyck was a prodigy and entered the studio of a successful local painter, Hendrick van Balen, at the age of ten. His duties as an apprentice included not merely the preparation of paints and panels but, as he grew in skill, painting some background areas of the master’s works himself – including landscape settings. By 1615 Van Dyck was an independent painter in his own right and set up a practice with Jan Brueghel the Younger, a scion of the great landscape family. Not long afterwards he was invited by Peter Paul Rubens, Europe’s pre-eminent painter, to join his studio. Rubens described Van Dyck as “the best of my pupils”, though he was not a pupil at all. He was rather an assistant – junior to the overworked senior man, but an artist not a menial. 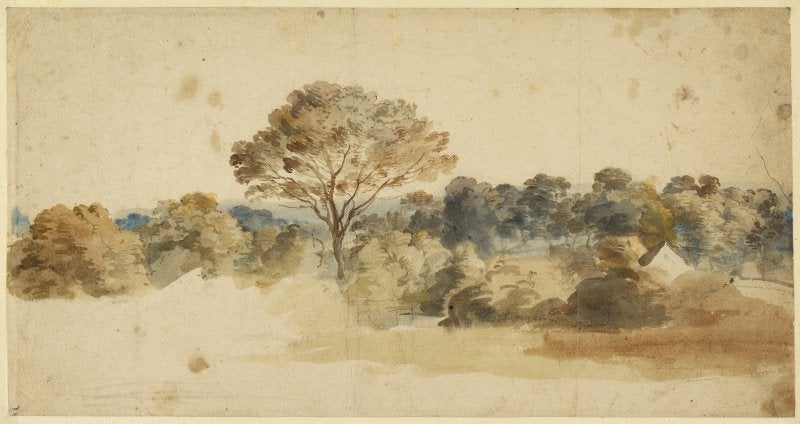 Rubens’s pure landscapes are now seen as among the most important and influential of his works, but it has long been assumed that Van Dyck was largely immune to this aspect of his work. There exists, however, a tantalising reference to the existence of five Van Dyck landscape paintings in Antwerp collections in the 17th century: none is now known. Nevertheless, he did sketch landscapes on his many European travels, while during his six-year stay in Italy from 1621 to 1627 he made a close study of the works of Titian, who gave landscape an important role in his pictures.

It was, however, England that brought out the landscapist in Van Dyck. He spent several months here in 1620 when he was invited to work for James I, possibly as a designer for the king’s new tapestry works at Mortlake. He returned in 1632 to work for Charles I and Queen Henrietta Maria, receiving a knighthood, a pension of £200 a year, the title of “Principal painter in ordinary to their majesties” and a house on the Thames at Blackfriars, where a special causeway was built to felicitate the king’s visits. He also married Mary Ruthven, lady-in-waiting to the queen, and although he made lengthy visits to Flanders and France, England remained his home until his death in 1641.

It is not known where this picture of a cottage among trees, circa 1640 and now in the Getty Museum in Los Angeles, was painted, but it is one of some 30 surviving landscape sketches that show him to be the father of the British watercolour tradition. Some of his studies were used for the backgrounds of his portraits but this, quickly drawn “from nature” (as he signed a similar sketch) in the Continental manner, is redolent of a painter whose eye was caught by the way the tall tree – depicted, unlike the others, with such careful and delicate strokes – dominates an otherwise unremarkable patch of ground.

There’s nothing picturesque about the scene but, despite its limited colours, it breathes the reality of a specific place and time. It is a picture not just of a view, but of an hour the painter snatched during a walk or a carriage journey to the house of a client. He didn’t bother to fill in the foreground or to prettify the view because it was not meant as a finished work for the eyes of others, but left it as he came across it – a change of mood, a breathing out, before he returned to silks and faces.