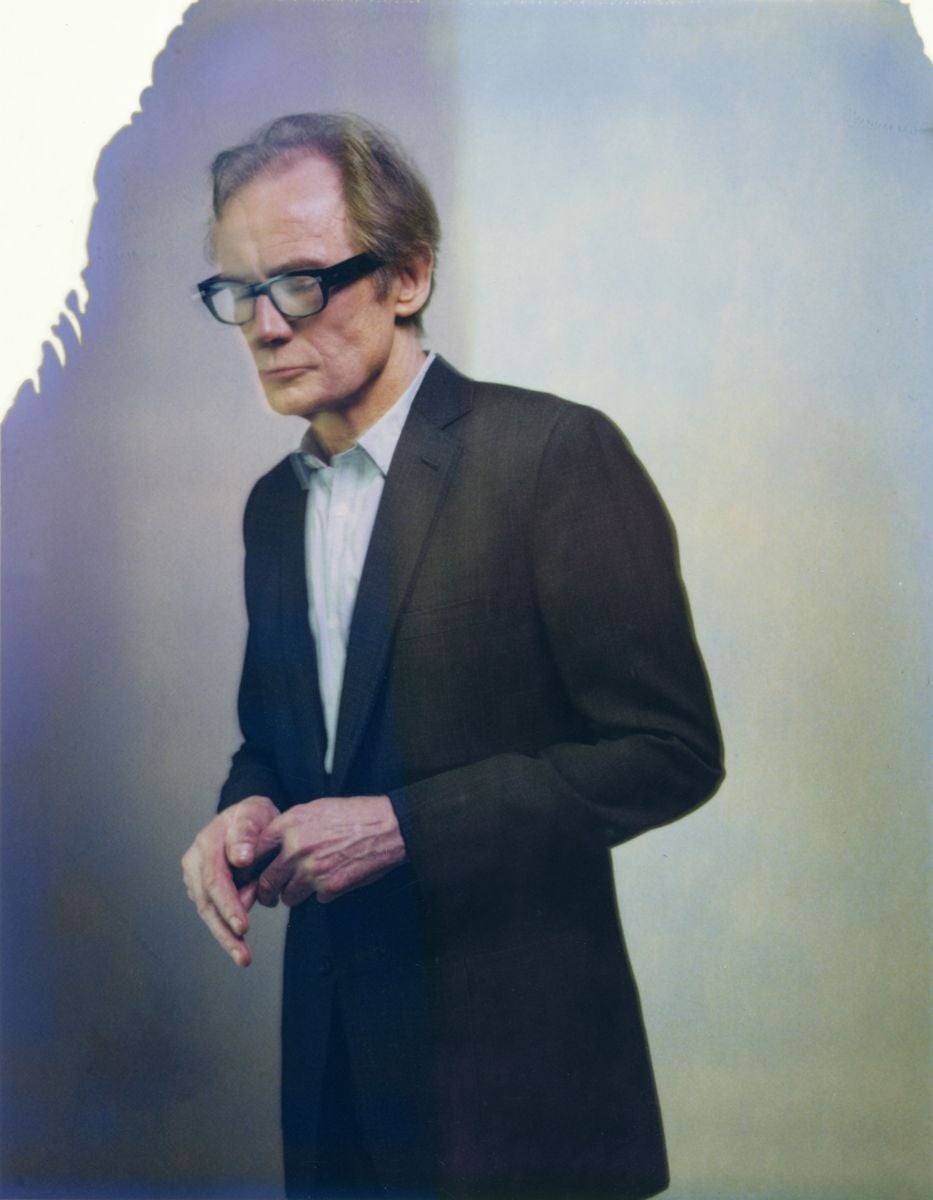 Bill Nighy is unmistakable even at a hundred yards: a long streak of navy blue fabric, a pair of black specs and a mobile phone. He lives by himself near Savile Row in London and it’s tempting to imagine that his flat has been fitted with a dumbwaiter enabling a fresh bespoke suit to be sent up to him each morning.

He’s just got off the Eurostar from Paris, where he was recording vocals for a computer game. It was a surreal activity that involved reading various vocal “instructions” from a script – “scream”, “die”, “cackle” – to cover any situation. The instruction that intrigued him most was “aware”, which he re-creates now as a kind of grunt, like a man rousing himself from sleep to look at something that doesn’t interest him very much.

Drowsiness is an innate part of his onscreen energy. A reviewer once wrote, “No one does tired like Bill Nighy.” “Which was strange,” he says, as we enter a café, “because often when I think I’m at my most strident and energised, people think I’m tired and disinterested.”

Nighy spends his life “pursuing sleep” but doesn’t get much of it: he has made 11 films in the past two years and is often accused of workaholism, which he thinks is ridiculous. Before any important job, he lies awake most of the night. “The minute you sit up in bed and go, ‘This is so unfair!’ you’re not only wide awake, you’re angry, too,” he says. “So I lie there without emotion – as a lump.”

To pass the time in the hours before dawn, he watches YouTube clips of Christopher Walken on his iPhone. He’s seen them all: Walken on Letterman, Walken reading the lyrics of Lady Gaga, Walken’s Jackanory appearance on Jonathan Ross’s Saturday Zoo, in which, dressed in a chunky-knit sweater, he reads “Three Little Pigs” (“Arrivederci, porco numero due! Buongiorno, salami . . .”).

The pair recently worked together, in the upcoming sequel to David Hare’s political drama Page Eight, but there are deeper connections between them. Both are said to “play themselves” in every film they make. Walken once confessed that those long, alarming pauses of his – those shifty scans of the eyes – are simply him forgetting his lines. Nighy has also spent a lifetime undercutting his acting: pinning him down today on what he does and why he is so consistently successful at it is almost impossible. “I learn the lines and I try to say them like someone would if they were in that situation,” he says, calling to mind Ian McKellen’s actorly turn in Extras (“I imagined what it would be like to be a wizard . . .”). “You walk and talk the best you can,” he continues, deadpan. “The idea is to try to appear as relaxed or normal as possible.”

Nighy has turned what he calls his “chronic, comic self-consciousness” into a valuable commodity. He doesn’t watch his films, because he can’t bear to see “all the little bits of cowardice, the things I didn’t quite pull off”. Yet it’s not quite true to say he is just playing himself. For a start, while his characters are often lovable failures in the gentle decline of middle age, he achieved sudden international fame at the age of 53 in 2003 with Richard Curtis’s Love Actually.

The floppy and delightful father he plays in the new Curtis film, About Time, seems to be living a more comfortable version of midlife than Nighy is. While the character has retired at 50, apparently “in order to play more table tennis with his son”, Nighy still pushes himself through theatre work, “standing behind the set on the first night, waiting to go on and vowing that I will never, ever allow this to happen again. Why would I do this? What am I trying to prove? It’s not going to make me rich, it’s not going to make me anything . . .”

Although he admits that he has Curtis to thank for “making him castable”, it niggles him to talk about late-career success. “I’d like to say that prior to all that, I had a very enviable career and worked with most of the people I’d ever want to work with,” he says: “David Hare, Tom Stoppard, Harold Pinter, Anthony Hopkins and Dame Judi Dench . . . I played leading roles on television and in the theatre and had a very familiar, recognisable English career. I just feel compelled to say that.”

Still, there was a wilderness period in the 1970s when, having trained as an actor in Guildford, he worked as an assistant stage manager and spent much of the decade shuttling around in a van painting theatre sets. He was born in Caterham, Surrey, in 1949 to Alfred, a garage owner whose family had been in the chimney-sweeping business, and Catherine, a psychiatric nurse from Glasgow. After a brief stint as a messenger boy on the Fieldmagazine he applied todrama schoolon the advice of a girlfriend.

Acting appealed to him because it was “a way of being legitimately out of work” – and he was: for a time, he ran a women’s clothing stall at Sutton Market and there were stints as a manual labourer, building bridges on the M2. Not cut out for heavy work, Nighy was sent down the middle of the concrete pillars to clean their wire interiors, a job that struck him as particularly absurd, given that no one could ever see the result of his labour.

Talking to him for a couple of hours, you get the funny feeling that Nighy might be living in a strange little film – something lowbudget, rather funny and very English. His obsession with music is well known but it is more than a hobby. He has a constant soundtrack, which he plays out loud on speakers in hotel rooms and trailers, with different playlists of songs for morning and night. Music seems to provide him with a sense of cinematic unity: an obscure pop song from 1993 called “Koochie Ryder” by the Peckham band Freaky Realistic became his anthem for a successful opening night. He first played it while working on Tom Stoppard’s Arcadia at the National Theatre, running round the house because the show had gone without a hitch. He plays it now for “those beautiful moments when you do something difficult at work and then you feel better. And you want that feeling back – the feeling where it’s all OK.”

He admits to being particularly fond of his washed-up rock-star creation Ray Simms in the 1998 film Still Crazy, “a reasonably nice bloke and challenged in similar ways to me, I suppose”. Nighy fitted the character with a permanent sniff to suggest his wilder days. Earlier in the decade, like Simms, Nighy had kicked a long drinking problem, helped by his partner Diana Quick, the mother of his daughter, Mary. The couple split up in 2008 – he notes that he’s able to listen to songs on speakers all day because he’s often alone – but he now counts coffee and M&M’s as his only addictions.

It is a strangely self-aware way to live, with a rotation of suits and songs and moments invested with happiness, but it makes an odd kind of sense for someone whose life has changed so rapidly in recent years. “I have been lately trying not to allow all the static in my head [to] steal the day, because I lost a few days like that and I don’t want to lose any more,” he says.

It’s a theme that runs through About Time, in which the time-travelling main character learns that he can relive each day with a better attitude the second time around. There’s a certain pleasure in the expectation of the inevitable and it’s one of the reasons we go to see Curtis’s films. I spent half of About Time aghast at how unreal it was – a kind of Christmas Carol with Oyster cards – and the other half deeply moved by its portrait of familial love and struck by the woeful realism of its settings – First Great Western trains, Pret A Manger.

“Richard’s approach is not in any way tactical,” Nighy says today. “I know what you mean about ‘real’ and ‘unreal’ and it is quite something to pull off, to get that kind of particular world – this eternal world – in movie after movie. He writes from what he knows about, which is his background, a white, middle-class-stroke-English existence. I guess I’m trying to answer on behalf of him but I know what it’s like to want to live in a film.”

Curtis brought Nighy to charity work through his long-time involvement with Comic Relief. “He made a decision when he was a very young man that whatever else his life included, it would include this work,” Nighy says. “He and his wife determinedly cordon off a percentage of their year in which to concentrate on their charities and he has been doing so quietly, without a fuss, for years. He got hold of American Idol recently and in one hour raised $70m.

“He is somebody you can point to and say, ‘That man has saved – literally saved – millions of lives through his activities.’”

In 2005, Oxfam approached Nighy to lobby at the G8 and he has attended every summit since. In 2011, again working with Curtis, he became the figurehead for the “Robin Hood tax”, a campaign for a levy on financial transactions now going through the European Parliament but still resisted by the UK. He must be expecting every journalist to tell him that celebrities shouldn’t get involved in politics, because when he talks about this side of his work, he sounds more turbocharged than he does about anything else.

“I am not an expert on international affairs,” he says, “but I don’t need to be to know that the Robin Hood tax is simply and uncomplicatedly a fucking good idea. It will institutionalise charity and you’d never have to listen to people like me banging on ever again. It’s a tiny percentage – 50 pence in every £1,000 generated by the kind of speculating that precipitated the financial crash, for instance. It’s not punitive. It’s the same idea as the Tobin tax [a currency transaction tax, designed to manage exchange-rate volatility] 35 years ago and that worked.

“People say it’s not worth it unless every country takes part,” he continues. “I say: of course it is. They say it’s very complex and I say: so is space travel. There are many salaried experts who will tell you that I’m a wellmeaning but profoundly mistaken man. But there are also people in this world who are philosophically opposed to any kind of aid and I had no idea they existed.”

It’s getting late and his mobile phone starts to buzz: the ringtone is David Bowie’s rather haunting comeback single “Where Are We Now?”. “It’s become acceptable to sit around and say that the money will never get through,” Nighy says, ignoring it. “If you’ve ever been to Africa and seen what Comic Relief is doing, it makes it impossible to make any of those remarks again. It seems crazy that you have to prove it but it’s true.”