Nah, just kidding, of course he hasn’t done that. But there was something that looks suspiciously like good news in today’s Autumn Statement all the same: a cut in Stamp Duty which, Osborne claims will benefit 98 per cent of all home buyers. The only people who won’t benefit are the very, very rich.

In other words, this looks a lot like Osborne’s answer to Labour’s mansion tax.

Stamp Duty, for those who haven’t had the pleasure, is a land tax you pay when you buy a house. Not any house, admittedly: it doesn’t kick in until £125,000, so, historically, it only affected people who bought large and expensive houses.

But over the last few years, as prices as have gone up, more and more people have found themselves falling into that price bracket. In parts of the country (hi, London!) almost any property purchase will result in a bill for Stamp Duty.

And this bill, remember, is not paid by the people who are selling a house (and thus, presumably, have money to spare). It’s paid by those who are buying it.

Today Osborne has announced that, from midnight tonight, he’s changing all this. (He seems to have borrowed his plan from Scotland’s finance minister John Swinney.) Under the reformed Stamp Duty regime, there’ll no tax paid on the first £125,000; then 2 per cent on the portion up to £250,000. Unlike under the old regime, though, that first £125,000 is still untaxed, so the tax bill increases gradually as the price of the property does. There’s no longer any cliff edge. 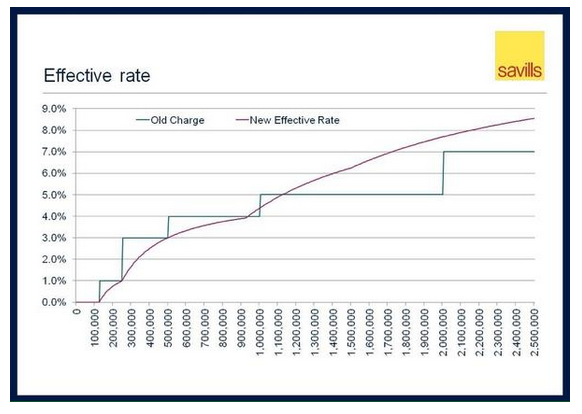 This is much more progressive than the current system; it’ll do less to distort the housing market, too. It’s very difficult for Labour to counter because it looks like, well, a good policy. Already people are calling it a “tax on London”, which is about the greatest accolade it could have.

There’s still the same amount of money flowing into the market: all that’ll change is the share of it that’ll flow to the Treasury. Lower the tax that buyers pay – and the headline value of property might actually rise.