When Aiziheer Ainiwaer talks about his father, Ainiwa Niyazi, he paints him as a comedian and the joker of his friendship group. He describes how the 57-year-old teacher always had the room in stitches with his impersonations of famous pop stars. But at home, the father-of-two would be more serious. “My father constantly used to tell us we should study and be well educated,” says Aiziheer. Throughout Aiziheer’s childhood, that mantra resulted in regular trips to the local bookshop, where his father would wait while he chose an armful of books.

Ainiwa is one of around 11 million Turkic speaking Uyghurs, a Muslim ethnic group living in the troubled Xinjiang province of Western China. Chinese Communist Party (CCP) members are encouraged to forgo their religious beliefs, and although Ainiwa was born a Muslim, “he never practiced… never prayed,” Aiziheer says. “He never said anything against the government, he was always very loyal”. By the time Ainiwa went missing, he’d been a member of the party for 30 years

But loyalty wasn’t enough to spare Ainiwa from China’s crackdown on Uyghurs and other Muslim minorities. Human rights groups estimate that between one and three million people are being detained right now in a dystopian network of “re-education” camps. In April 2018, Ainiwa became one of them. 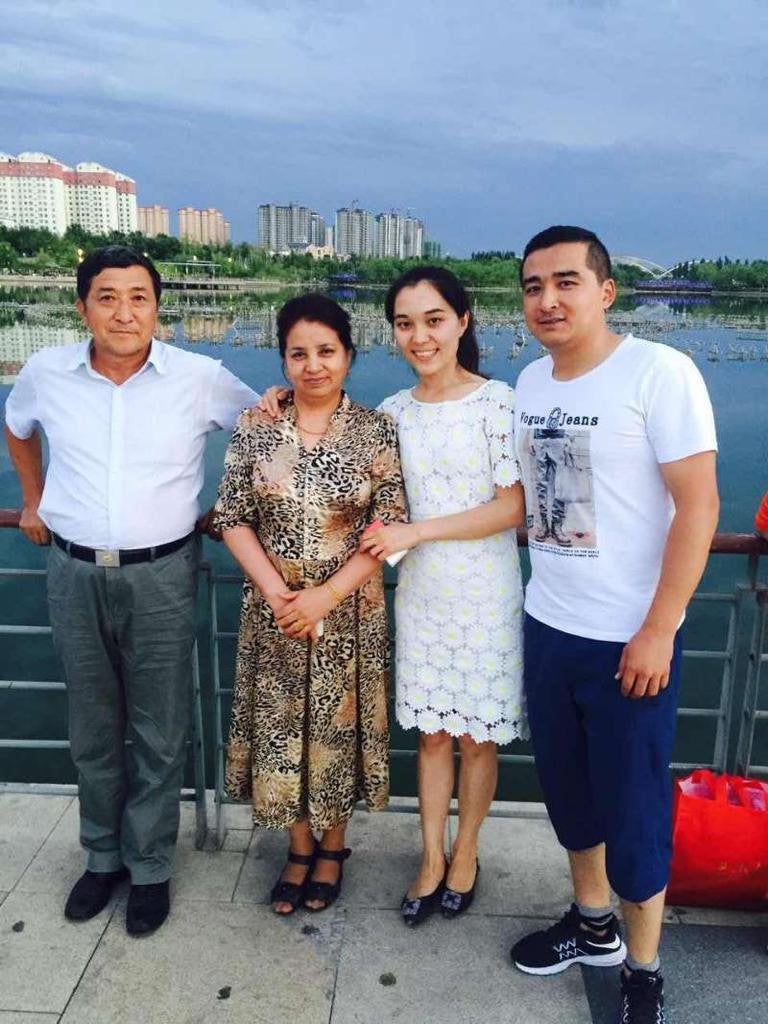 China has a long, fraught relationship with Xinjiang’s Uyghurs. During the past decade, Uyghurs have reported ongoing human rights abuses and the violent suppression of peaceful protests, while Chinese authorities have linked Uyghur militants to several deadly attacks. Xinjiang has declared independence twice in modern history; once from 1931 to 1934, and again between 1944 and 1949, at the same time the region was absorbed into Communist China. While some Uyghurs are still calling for the return of the independent state of East Turkestan, experts say that there is no single agenda uniting the group; some Uyghurs are happy to integrate into China.

Adrian Zenz, an independent researcher and expert on China’s minority policies, says the region’s re-education camps are linked to China’s anxieties about Uyghur separatism, but they are ultimately about “Beijing’s inability to assimilate these Turkic minorities.” Recent policies in Xinjiang, which have included banning the Uyghur language and rolling out a far-reaching surveillance programme, suggest Chinese authorities are attempting to strip the Uyghur minority of their religious and cultural freedoms.

Over email, Zenz writes that assimilation has long been a goal of the Chinese state. “Assimilation enables control”, he says. “It makes minorities easier to understand and reduces the difference in their perceived identity compared to the Han majority. The Chinese leadership are suspicious of people who are different and speak different languages.”

Nobody knows what happens inside these “re-education” facilities, which have been described by Chinese government documents as “transformation through education” centres, and by Uyghur activists as “concentration camps”. Human Rights Watch (HRW) says that detainees are politically indoctrinated and forced to sing patriotic songs and watch propaganda videos. A HRW report from 2018 raised concerns about deaths and abuse in the camps, as well as poor conditions, overcrowding, and indefinite confinement.

Sophie Richardson, HRW’s China director, says rights violations in Xinjiang worsened when Chen Quanguo, formerly the party secretary of Tibet, was transferred to the region as the party’s secretary of Xinjiang in 2016. Since then, Quanguo has used the “Strike Hard Campaign against Violent Terrorism” as an excuse to systematically repress local Uyghurs. “It’s very important to understand there is literally no legal basis for these detentions,” Richardson says.

Yet these policies towards minority groups may be more about quashing an ideological competitor than responding to genuine threats of religious extremism. “Organised religions have historically presented a strong ideological alternative to Communism,” Zenz says. For the Uyghur diaspora, it feels as if relatives disappear into thin air. When they are detained, contact stops abruptly – details of their detention instead leak back via family friends through China’s social network, WeChat. Reasons are never given for why they have been taken, only speculation of when – or if – they will be released.

Aiziheer, who now lives in Belgium with his own children, is haunted by his father Ainiwa’s disappearance. “We – the diaspora – are deeply affected by the situation.” He is addicted to reading survivor testimonies and news stories about the camps that circulate on Facebook. Over the phone, he says: “I try to imagine how harsh the situation must be for my father. It kills me”.

In a press conference reported by the New York Times in July, Alken Tuniaz, vice chairman of Xinjiang’s government, claimed that “over 90 per cent of the students have returned to society and returned to their families and are living happily.” He used the official language to describe the camps, labelling them “education” centres – and those inside “students.”

That statement was met with derision among the Uyghur diaspora. “This is a complete lie,” Dolkun Isa, President of the World Uyghur Congress which is based in Germany, told me in London. He has seen no evidence that a significant number of people have been let go. “Nothing has changed but because international pressure is growing, China has been forced to defend their position; to try and hide reality.”

In May 2018, Isa’s mother, 78-year-old Ayhan Memet, passed away in a camp. He found out three weeks later. “I don’t know any details, I just got news that she died. I don’t know how many family members I have in the camps, I don’t know whether my 90-year-old father is alive or not”, he tells me.

In response to Tuniaz’s statement, Uyghurs on Twitter began posting about their missing relatives with the hashtag #Provethe90%. One Tweet was written by Arfat Erkin, who sometimes goes by the name of Alfred Uyghur, a 22-year-old student living in the United States. It read: “China show me my parents, my cousin Ilzat and my other relatives. #prove90 % concentration camp detainees r being released as u stated. It’s been years since I last heard my parent’s voice…” 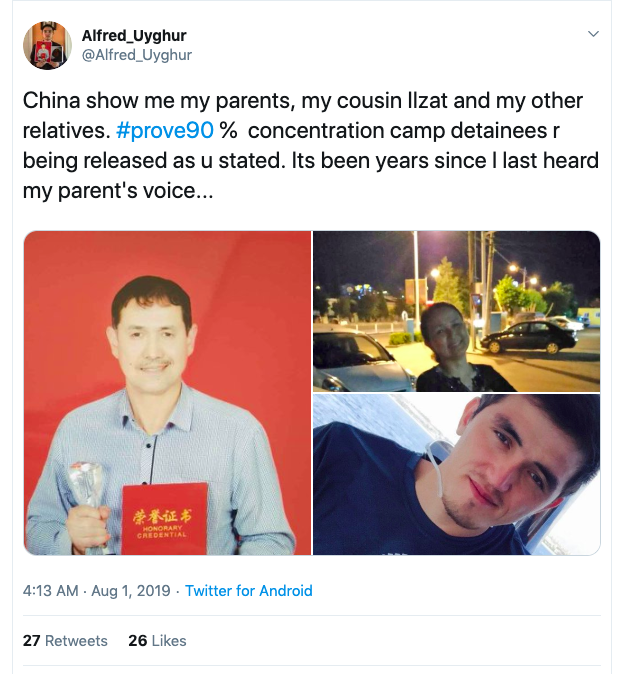 When he first arrived in the United States, almost four years ago, Erkin would call his family often. In 2016, when he heard about Uyghurs being detained, he realised staying in touch could put his parents Erkin Tursun and Gulnar Telet at greater risk. “Our conversations became less and less, just short questions like, ‘how are you?’.” Soon, even those messages felt too dangerous and by 2017 they had deleted each other from social media.

Arfat doesn’t know why they were detained. He wonders whether it was because they were well educated – his mother taught mathematics and his father was a teacher and TV producer. “Many of the detained were educated intellectuals in Uyghur society,” he says. But he also wonders if they were taken because of him; because they had a son studying in the US.

Few can fathom why the people they love have been detained. In the absence of evidence, many blame themselves, suspecting relatives abroad are a qualifying factor for detention. Rushan Abbas, a Uyghur American who left Xinjiang in the late 80s, believes her sister’s disappearance was punishment for her activism – Gulshan went missing six days after Rushan spoke about the Uyghur crisis at a Washington think tank. 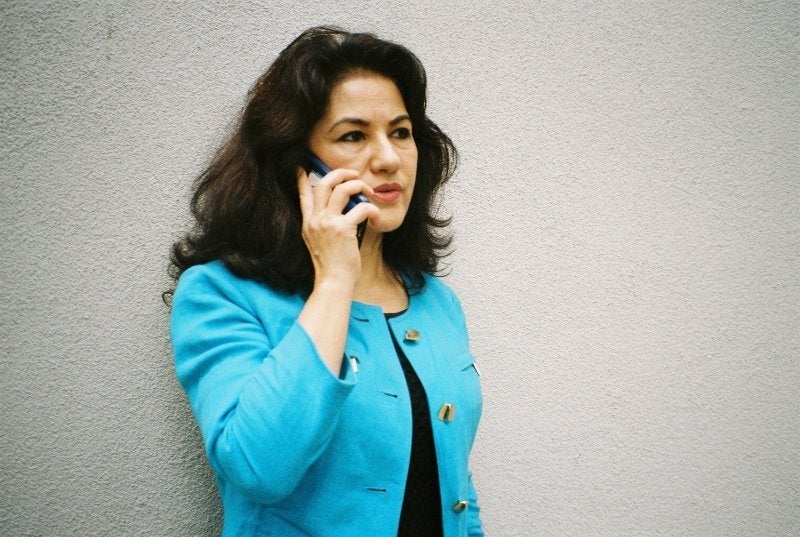 She describes how her older sister is “quiet” and “kind”. Dr Gulshan Abbas, 57, retired early from her job as a dermatologist due to health problems. But even in retirement, she wanted to help people. That’s when she started accompanying Uyghurs from the villages to the city hospital in Ürümqi, where she lived. Many people from rural Xinjiang don’t speak Mandarin so Gulshan, who is fluent, would translate for them, helping them get the treatment they needed.

“Day and night she would take these people to the hospital,” says Rushan. “She became like Mother Theresa. We used to joke with her that even though she was retired, she was working more now than when she was working full time.”

To her daughter Ziba, who now lives in Florida, Gulshan is “a sweet lady” and a normal mum. Like her aunt, Ziba is infuriated by the authorities’ silence on Gulshan’s case. Gulshan hasn’t been seen since 11 September 2018. “This is just cruel,” says Ziba. “Why would she disappear like this? She’s an educated woman, she doesn’t need to be in an education camp.”

Morgan Meaker writes for the Atlantic, the Guardian and Reuters.