North Korea has a state operating system for its computers, which makes sense in a country that lacks any kind of freedom of expression, and where the media is entirely a mouthpiece for the regime. It’s called Red Star, and it’s a fork of the popular Red Hat Linux distribution. It was developed in 2002 as a home-grown replacement for Windows, but it kept the look and feel of Microsoft’s OS. Up until last week, the most recent version, 2.0, was known to mimic Windows 7.

Will Scott, a computer scientist from the University of Washington, went to teach computer science at Pyongyang’s Kim-Il Sung University in 2013 (and did a really fascinating reddit AMA afterwards). While there, he took screenshots of version 3.0 of Red Star OS, which has been comprehensively re-skinned to look like Apple’s OS X: 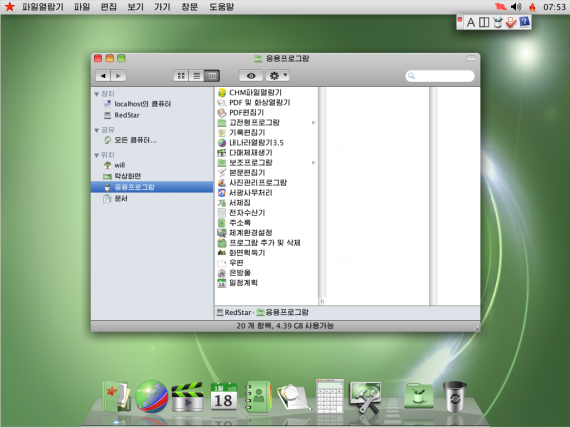 (There are loads more pictures on the ever-excellent North Korea Tech blog, so go visit them and give them some traffic.)

Windows, once nearly ubiquitous in every home and office, has fallen pretty hard since the double-hit of smartphones and tablets. In 2008, 90 percent of all computers ran Windows; in 2013, it was 32 percent. Perhaps a sign that incoming Microsoft CEO Satya Nadella is doing a good job will be when pirates – including the North Korean regime – start switching back from Apple-alike software.

This kind of behaviour is pretty typical of what used to happen in the USSR, where Soviet engineers reverse-engineered western pocket radios and computers with mixed results. North Korea has had its own range of Android tablets for a couple of years, with an illegal, unapproved Korean-language adaptation of Angry Birds pre-loaded – reviews of the Samjiyon, the latest model, by western journalists have been surprisingly positive.

Microsoft can take some solace in the news that its Kinect cameras are proving perfect for monitoring the DMZ between North and South Koreas, preventing soldiers creeping across to the south. An engineer, Ko Jae-kwan, has rejigged the cameras as motion-detectors, reports the Wall Street Journal. The border between the two nations is the most heavily-militarised in the world.