It was a mad mission. On the bloodiest night of the latest Israeli onslaught on Gaza, over 550 Egyptian revolutionaries in 11 buses drove over the border to the besieged territory. The unprecedented expression of solidarity challenged their country’s siege on the strip.

Activists, who had fought their own war for independence on Tahrir Square, watched for the first time, from the windows of the buses, rockets fall from the sky.

As regular as a heartbeat, the missiles landed on either side of the buses that drove through a pitch-black Gaza to the main city.

Surveillance drones buzzed a continuous base note in the background.

The message from the Supreme Court: do not get used to having rights 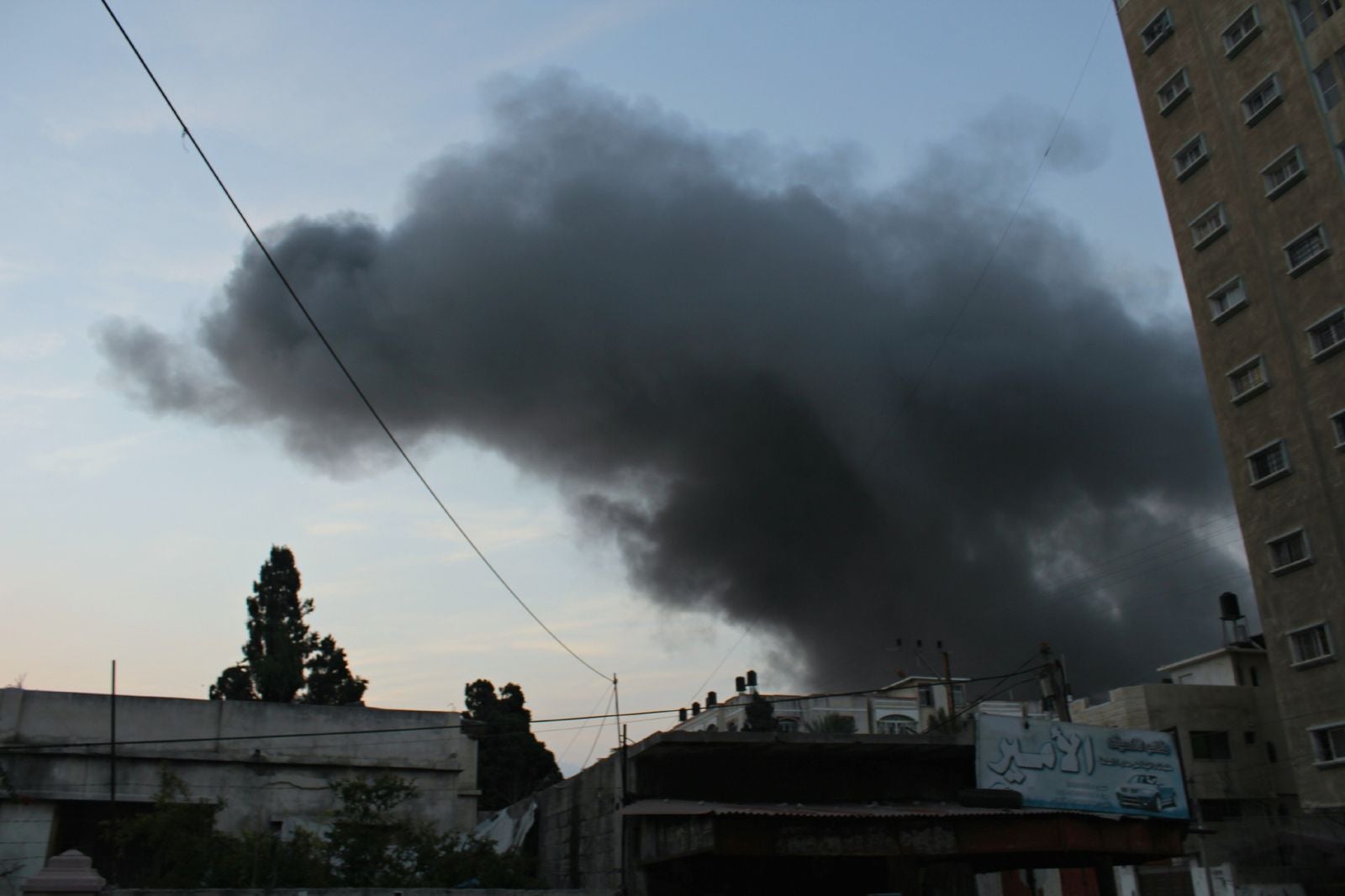 Rocket lands metres away from the convoy, a building goes up in smoke in Gaza City

It was reportedly the single largest number of civilians to successfully enter Gaza in a solidarity convoy since the creation of Israel.

“Egypt shares a border with the Gaza strip, the Egyptian regime is as just as much as a part of the siege on Gaza as Israel,” said Philip Rizk, a member of revolutionary media collective Mosireen, about the significance of the crossing.

Currently Egypt prevents all trade with the Palestinian territory and there are month-long waiting lists for Gazans to cross, despite promises the border would open post-revolution.

Entrance into Gaza for Egyptians is also difficult: travelling via the tunnels has become a necessary and dangerous alternative.

The coalition of leftist political groups who organised Sunday’s convoy, never expected to get more than 50 people in – on the way they had drawn lots to determine who would enter.

In 2009, during the last Israeli offensive and under the Mubarak regime, a similar convoy fled as military police stormed the buses at the Rafah crossing.

This time, however, all 561 protesters were let through. Gazans cheered the buses on as we drove through the airstrike.

A shared history and objective was the topic of conversation when the Palestinians and Egyptians met at Gaza City’s main hospital for a press conference about the historic convoy. 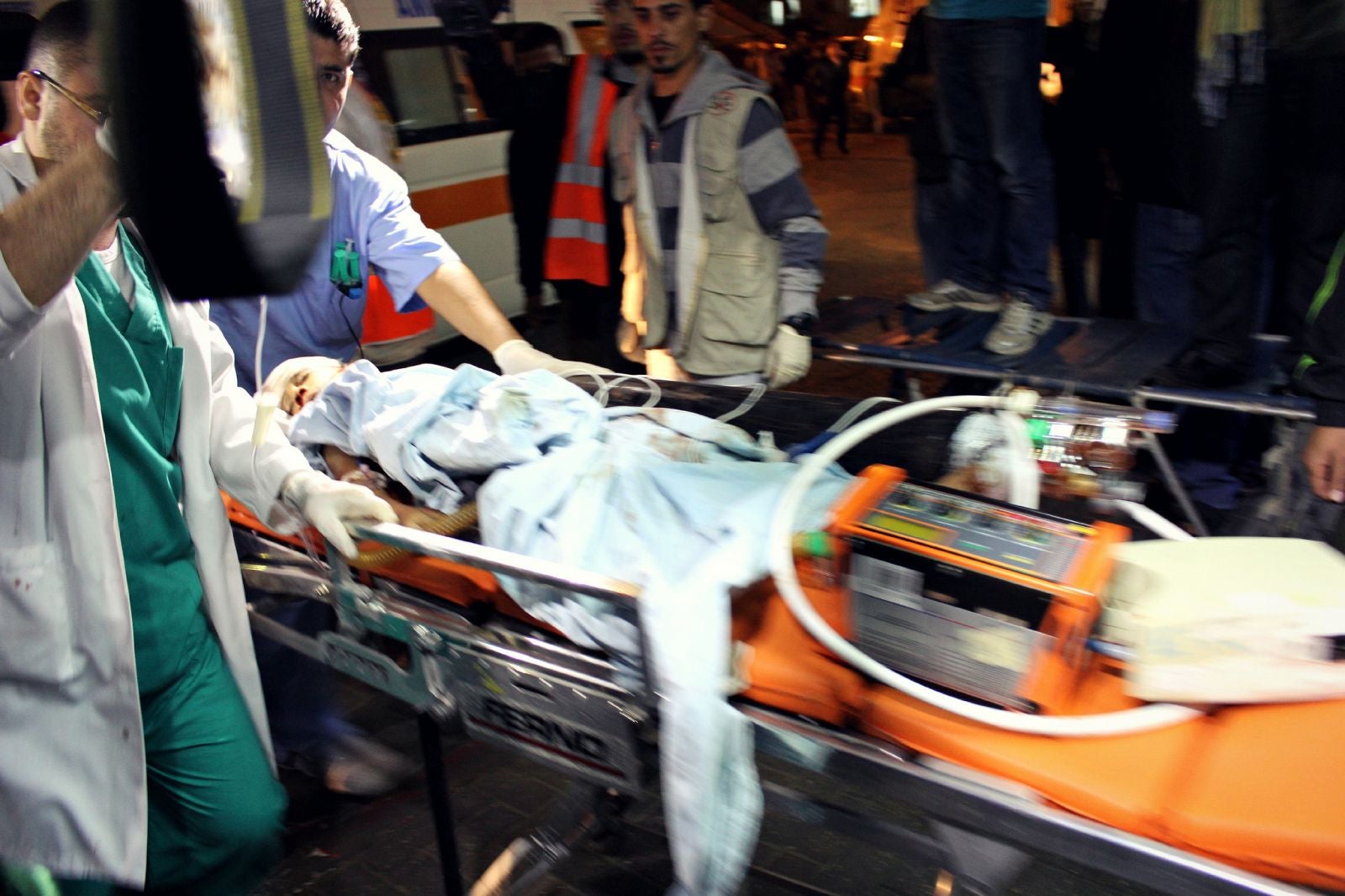 A child is rushed into the emergency room at Al-Shifaa hospital, Gaza City

Speaking to the crowds, who chanted “We give our lives to Gaza”, the Gazan Minister of Health Hani Abdeen, talked about Palestinians and Egyptians being one people with one history.

“Palestine must be liberated in order to ensure the wellbeing and safety of Egypt,” he said. Hamas and Israeli rocket-fire blasted in the background.

The Egyptian activists echoed his sentiments.

Ragia Omran, a convoy organiser and lawyer who works with rights groups, thanked the Gazans for bringing Egyptians together.

“We came to the streets and united for the first time after the Second Intifada [in 2002],” she said, explaining how these protests were in many ways the beginning of the revolutionary movement in Egypt.

Later, sitting in the living room of one Gazan family who lived next to the hospital, the mother told me how she followed last year’s Egyptian Revolution, obsessively online and on the television. The future of Egypt, she said, was the future of Palestine.

Trapped in her house for fear of the sky, she and daughters now track the explosions shattering her neighbourhood in the same way. 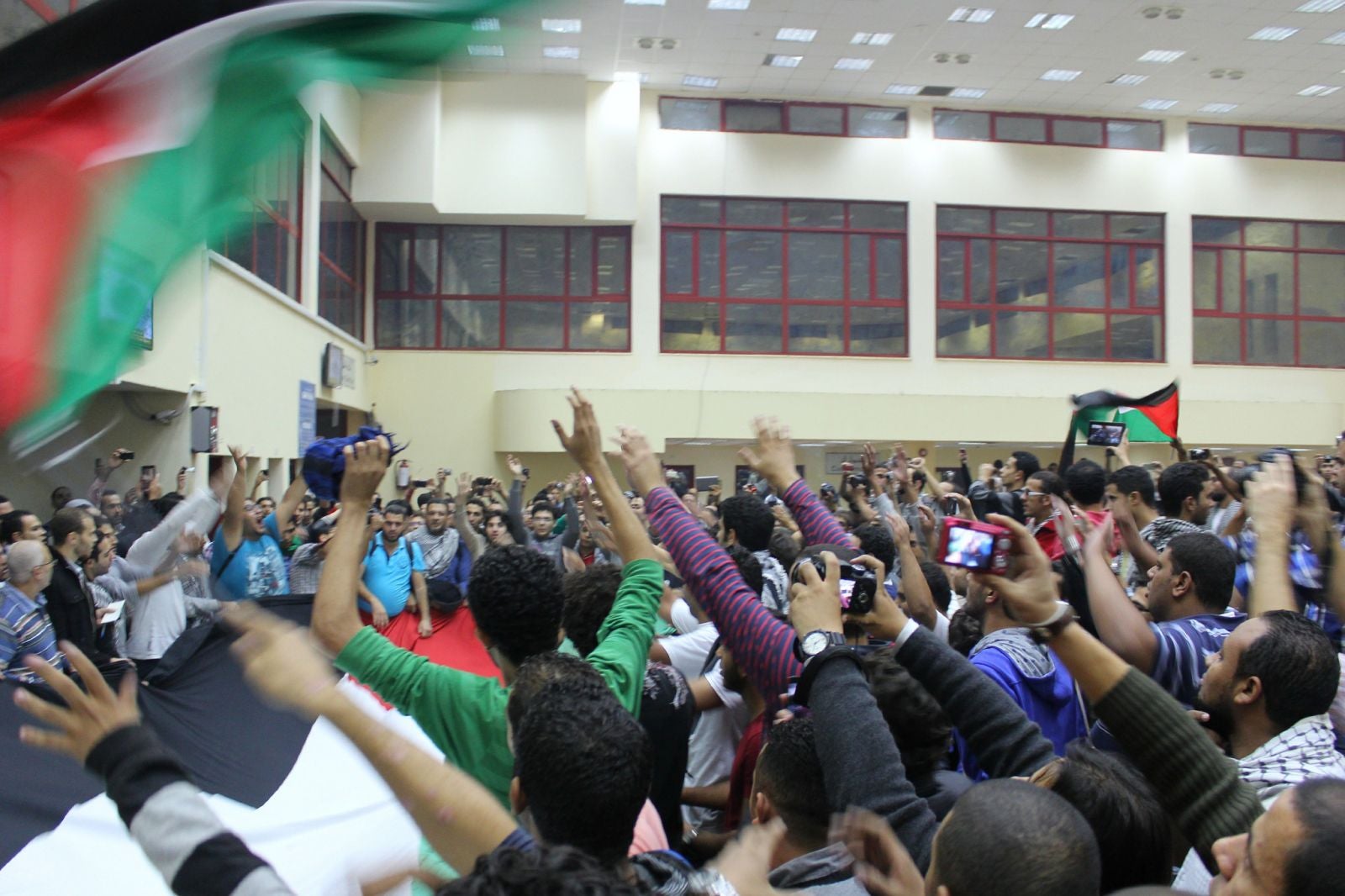 At night the shelling gets worse. It was deemed too dangerous for the convoy to cross back over to Egypt, so we stayed: hundreds of us sleeping on the streets.

In the thick of the onslaught, the hospital offered up their wards for people to camp in and opened a kebab shop to feed the 500.

Suddenly a rocket exploded metres away from the resting convoy and hospital.

The pressure change pummelled our chests and the world shook. People dived for cover in the food stand.

A few minutes later a second missile landed on the other of the hospital. The air smelled of charred metal and masonry.

Our Palestinian escorts later told us that they believed that the convoy was being targeted by Israel as a warning.

Just before dawn, the violence escalated. A three-storey building, in nearby a residential area, was hit killing 14 in one go. Three more houses collapsed.

“It was heartbreaking as most of the injured were children,” says Gigi Ibrahim, an Egyptian activist describing distraught families in the chaotic emergency room.

Children cloaked in rubble dust sat with blank faces, babies just a few months old were brought in with shrapnel wounds and people desperately searched for their loved ones.

The morgue, Palestinian doctor Zakaria told us, was filled with children. “The majority of the people the paramedics bring in now are civilians.”

As the sun rose, we learned that night had seen the highest number of fatalities since the start of the offensive. 24 were killed that night.

Rockets followed us all the way back to the border. One, landing directly in our path, forced the buses to change direction. 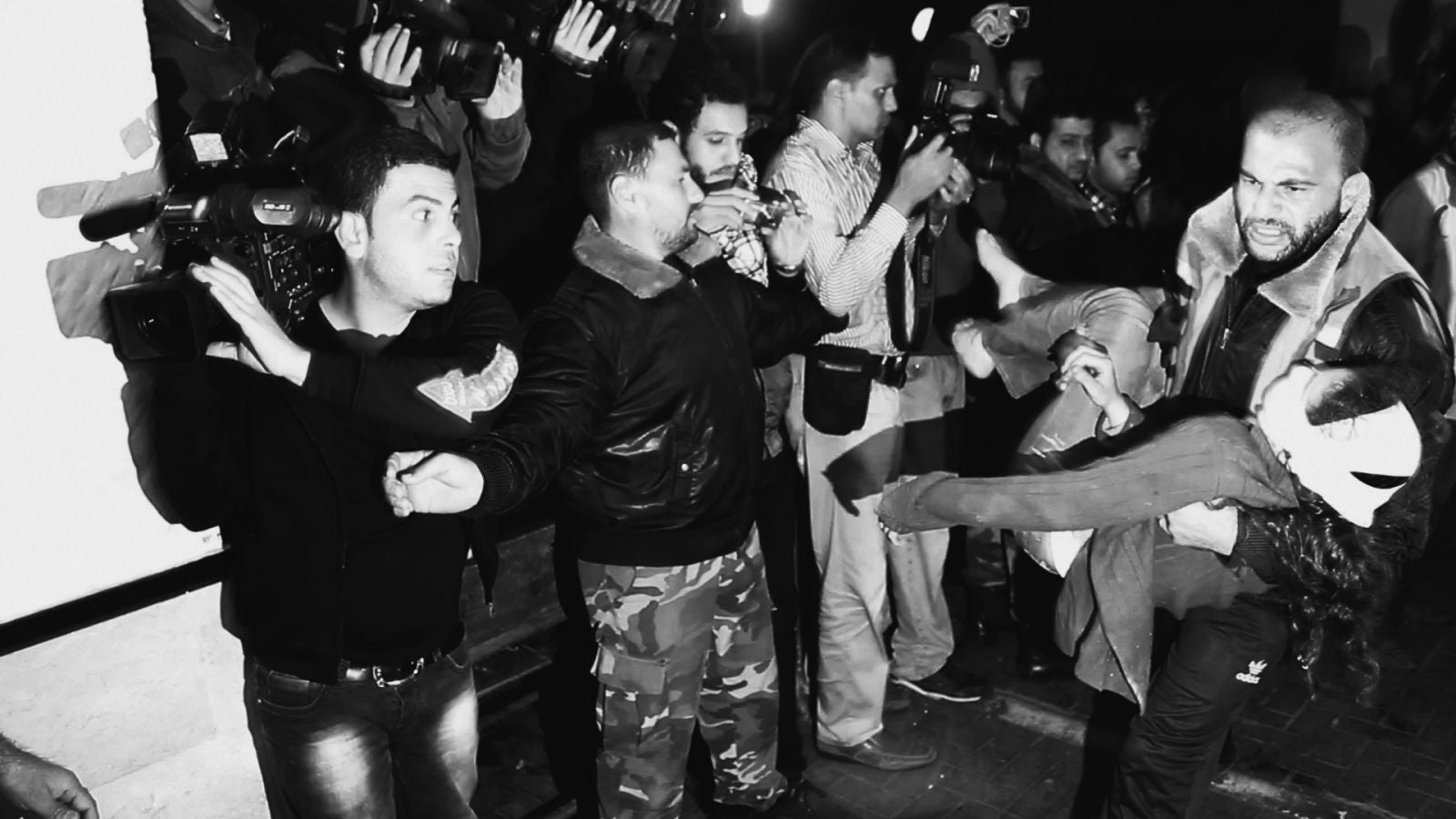 Injured woman rushed in past barrage of reporters, Al-Shifaa hospital

“The convoy getting through is a few steps forward for Egypt,” said Ibrahim, “Although President Mohamed Morsi has phrased himself as a pro-Palestinian revolutionary, this has yet to be translated into action.”

Taking up Mubarak’s mantle as the peace broker for the region, Morsi is currently negotiating a cease fire, however, Ibrahim argued this is not enough. Camp David, she added, must be rejected, referring to the contentious 1979 peace accords between Egypt and Israel. Relations in the region are still being shaped post-Arab Spring.

The final destination of the convoy was Mohamed Mahmoud Street, in downtown Cairo, which on Monday had become the scene of fierce street battles between Egyptian protesters and the police again: a stark reminder of the domestic conflicts still dividing Egypt. The convoy joined the protesters confronting the security forces. The Palestinian flags melted into the crowds.

All photographs by Gigi Ibrahim.