It would be hard to find any politician in the UK who would say that they are opposed to the Paris Accord and that the UK should not be doing as much as possible to achieve its Nationally Determined Contribution in full.  And yet 49 per cent of local authorities in the UK reported, in response to an FOI request, that they had no target to reduce their carbon footprint.

It seems that since the government abandoned the requirement to report on progress towards achieving carbon reduction in 2015 that almost half of local government has quietly shelved its targets on reducing its contribution towards global warming. Of those that do have targets their efforts are mostly focussed on reducing emissions from buildings that they own.

Progress on this seems to be ahead of target for most of the local authorities. However, it is difficult to ascertain whether this is as the result of proactive policies in reducing emissions or as a by-product of the closure of buildings as a result of cuts to services which have led to fewer employees and hence a need for less space.

There are some notable exceptions who have extended their policies for carbon reduction to take into account all of the other materials that they are consuming. The outstanding examples being Brighton and Hove and Ards and North Down Borough Council.

Outside of fuel and energy one of the biggest contributors of carbon emissions is paper. The process of turning trees into paper generates a large amount of carbon waste, 8kg of Carbon for five reams of paper – a ream being a pack of 500 sheets. The process of producing paper also requires the use of large amounts of water with each ream of paper consuming 108 litres of water.

Local authorities used an amazing 5.3m reams of paper in the last year. The industry average for production of paper is that 92 per cent of this comes from virgin sources – i.e. not recycled, meaning that 292,000 trees were felled to provide the paper used by Local Authorities. 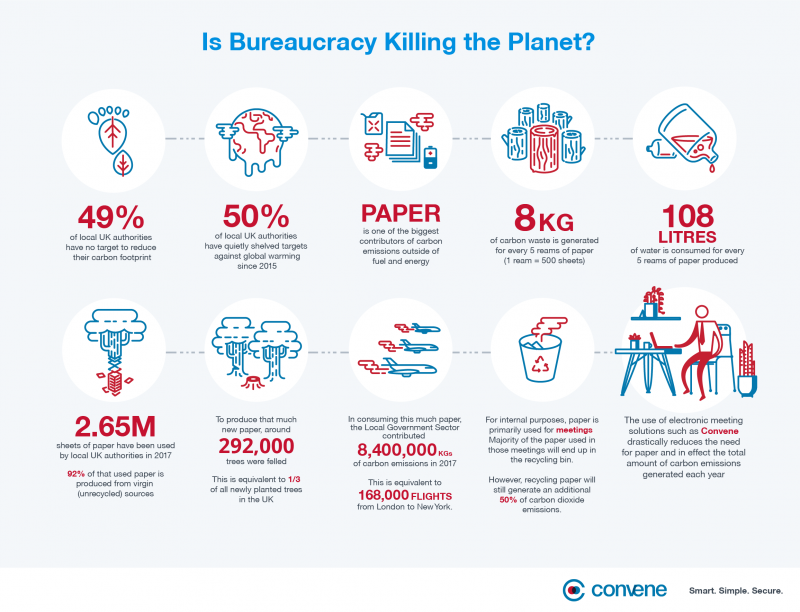 In the last six months, Sheffield City Council has been in the headlines for cutting down dozens of roadside trees. The number of trees cut down to provide local authorities with the paper they used in 2017 is the equivalent to a third of all of the new trees planted in the UK.

In consuming all of this paper the local government sector contributed 8.4m kilograms of carbon emissions to the environment in the last year. This is the equivalent to 16800 aircraft flying from London to New York.

292,000 trees is a lot of paper for a sector of government which was given the target and grants for putting 100 per cent of its services online by 2005 by the then Labour government. Whilst many of the respondents were unable to distinguish between the paper they were buying for external purposes and those that were being used for internal purposes the average usage identified by large unitary authorities such as for internal use only was 15,000 reams of paper in a year.

The primary usage for printing paper for internal purposes is in meetings. Local authorities’ functions require them to have a large number of meetings of varying kinds. Board meetings, committee meetings, child protection meetings all require multiple documents many of which end up in the recycling bin at the conclusion of the meeting.

Recycling is obviously better than cutting down more trees to make more paper but producing the recycled paper still generates an additional 50 per cent more carbon dioxide emission. So, buying a box of five reams of new paper and then recycling once will generate 12kg of carbon emissions. It is far better to have not bought it all and this is the conclusion that forward thinking authorities such as Buckinghamshire County Council, Isle of Wight Council and the Greater London Authority have adopted by using electronic meeting solutions.

In so doing they have are seeking to make an important behavioural change within their organisations from employees thinking “if I print it and then recycle it then it is ok” to one of “is there an alternative to printing this?” This is something that we can all do in our daily work lives whether we work for a local authority or not. After all, just like the politicians in local government, I am sure that we all agree with the idea of making the world a sustainable environment for future generations, and like the 51 per cent of local authorities, we don’t need targets to do what is right so let’s all try to waste less and do more.

Gemma Walford is a Senior Product Expert for Azeus Convene.