There is a scene in Roman Polanski’s critically-acclaimed World War Two film The Pianist in which the Jewish protagonist, played by Adrien Brody, puts on a German soldier’s coat to keep warm.

“Don’t shoot!” he tells the Polish troops who have come to liberate Warsaw. “I’m Polish!” A soldier, realising his mistake, lowers his gun. With disdain on his face, he asks: “Why the fucking coat?” It’s safe to say that in normal circumstances, “Nazi coat” can be used as shorthand for “Nazi person”. I found myself asking a similar question last month when I interviewed a “Nazi furry”. The furry (ie. person who dresses as an animal, often for sexual reasons) likes to wear a red armband reminiscent of those worn by the Nazi party. “It’s just a piece of cloth,” he said at the time, insisting he held no far-right views. Then why not choose another piece of cloth? I wondered to myself.

This furry is just one of hundreds of people online who flaunt the iconography of National Socialism whilst denying they hold any Nazi views. If that doesn’t make sense, it shouldn’t. “Ironic” Nazism, “satirical” Nazism, and “just joking” Nazism have taken over the internet. Who is behind it, what are they doing, and how did it begin? Unfortunately, it is probably Hillary Clinton’s fault. In September 2016, the presidential hopeful’s website declared popular internet meme Pepe the Frog to be a white supremacist symbol. If we ignore that this has now become a self-fulfilling prophecy (racists embraced Pepe after the Anti-Defamation League chimed in and officially declared the meme a hate symbol), this was a frankly ridiculous assertion.

“We’ve won folks… My God …We’ve won,” read a post on r/TheDonald – the Reddit hub for Donald Trump supporters – after the news. They didn’t hold back with their disdain. “This makes her look absolutely retarded to anyone young enough to be on the internet,” read the top comment. Why? White supremacists were undoubtedly already using the meme – many on the notoriously politically incorrect 4Chan board /pol/ had emblazoned the frog with swastikas. So why wasn’t it, in turn, a white supremacist symbol? 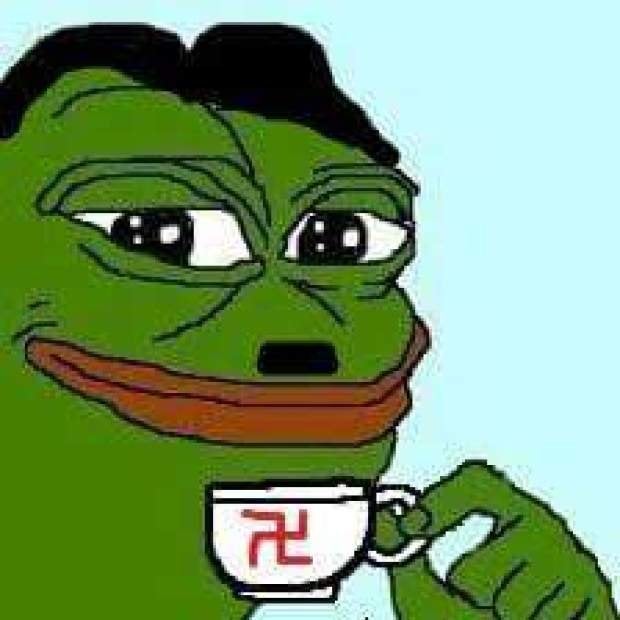 The answer to this is irony. Layers and layers of it slathered with thick, glutinous nonsense that form a Bruce Bogtrotter’s cake that is impossible to digest. You and I are what 4Chan would pejoratively call “normies”, i.e. normal people. We can’t possibly hope to understand the difference between someone on 4Chan who holds sincere Nazi beliefs and someone who is shouting “Death to all Jews” for the keks (see glossary), like a toddler who has just learnt the word “poo”.

This doesn’t normally matter – we can just ignore them – but Clinton’s post gave them the legitimacy and media attention that they craved.

It also, I would argue, set off a new internet trend. Angry at liberals labelling everything (most notably, the alt-right) “Nazis”, fringe internet communities decided to fight back. The logic – if it can be called that – went like this:

“Let’s dress like Nazis and act like Nazis so that liberals call us Nazis when we’re not! That will show just how stupid these liberals are!”

“The press, the media, does not deserve to have a consistent picture of reality presented to them.” “If the press becomes obsessed with a moral panic, such as the one about the resurgence of National Socialism, it is the duty of every subculture to feed that paranoia until its absurdity becomes plain for all to see.”

Earlier this week, the king of this logic died.

PewDiePie – the most subscribed content creator on YouTube – was dropped by Disney after the Wall Street Journal exposed an array of anti-Semitic comments in his videos. In the past, he has spoken out against the media for misrepresenting his “jokes”, but this time he wrote a blog post in which he admitted: “I understand that these jokes were ultimately offensive.” What changed?

What changed is that PewDiePie was confronted with a reality that anti-hate campaigners have long since known to be true. After his anti-Semitic videos, PewDiePie was embraced by the neo-Nazi website The Daily Stormer, which is now calling itself “The world’s #1 PewDiePie Fansite.” PewDiePie has learnt a truth that many of the “just joking” brigade frequently try to deny – that satire, irony, and jokes can validate and legitimise hate speech in a way that helps it to spread. “Pushing out anti-Semitic tropes has consequences in the real world,” says a spokesperson for anti-racism organisation Hope Not Hate. “PewDiePie may or may not believe this stuff himself, but he does need to understand that he has an effect on the world, and that racists and haters can sometimes act on the words and memes that are shared so readily on social channels, and – with soaring hate crime rates – already have.”

Then they came for Trash Dove.

The head-banging purple pigeon is a Facebook sticker (a picture users can post in the social network’s comment sections) that went viral this week. In response, 4Chan started “Operation Nazi Bird”, a satirical campaign to turn the meme into a Nazi symbol. The aim was to trick the left. This started to work when a self-described philosopher known as Quincy Frey wrote a satirical Medium post (which has since been removed after a copyright claim) declaring Trash Dove to be an “alt-right” symbol. When people began to fall for this, 4Chan won. Yet so too – as Hope Not Hate argue – did actual white supremacists.

“What started as irony will now actually spread and this will become a ‘Nazi hate’ symbol whether we like it or not,” Quincy Frey tells me. “The alt-righters from 4Chan work in a funny way; it always starts ironic but they seem to take irony to the next level and then these idiots become brainwashed… eventually their sickness will spread.”

Which leaves us with a question that regrettably summarises today’s state of affairs: are ironic Nazis as dangerous as real Nazis?

Simon Johnson, the chief executive of the Jewish Leadership Council, seems to think so. “It is difficult to understand how people can use Holocaust language, imagery or comments and think that it is a joke,” he says. “The French comedian Dieudonne uses the Quenelle gesture and other supposedly humorous Holocaust imagery, as well as dressing cast members in concentration camp uniforms, as part of his act.” The Quenelle gesture was an originally jokey gesture which has grown to be considered anti-Semitic after individuals posed in front of Jewish institutions holding the stance. In December 2013, French President François Hollande reacted to the gesture, saying: “We will fight against the sarcasm of those who purport to be humorists but are actually professional anti-Semites.”

Johnson agrees it is important to tackle this alleged comedy. “For many this demeans the Holocaust and would be considered anti-Semitism. Allowing these acts to continue perpetuates myths and often leads prejudice against the Jewish community.”

It is also important to note that many who claim to be “satirical” Nazis are simply hiding behind a thin veil of plausible deniability. The word “irony” – however incorrectly it’s being used – allows them to spread Nazi messages and iconography whilst denying culpability. It also leaves many on the left unsure where they stand. What’s more important: combatting hate speech or protecting free speech?

Kassie is a 31-year-old graduate student who reached out to me after being mocked for taking Trash Dove seriously as an alt-right symbol – proving that online trends can have real-world consequences. “My friend is liberal but thinks I’m overreacting and don’t understand satire,” she tells me. “But I don’t get why I have to call Nazi jokes satire. “The most frustrating part is that my concern is immediately written off as stupid because I don’t belong to the community. If we get past that part, then I’m overreacting or dumb because I don’t get that it’s ironic or I don’t understand that it’s a joke. But I get that on some level people are saying that it’s a joke, and some are ‘just joking’ and I still think that a joke can be racist and misogynist and alt-right or whatever.

“I’m just left with feeling like I’ve fallen down a hole of ironic devils advocates who use that as an excuse to say ‘funny’ racist and misogynistic things.”

When Prince Harry donned a Nazi uniform for a fancy dress party in 2005, no one thought he was actually a fan of Hitler. If ironic Nazis had emerged twelve years ago, they might have been given the same benefit of the doubt by being considered poor taste but not ultimately racist. Yet context is key. In an era when the President of the United States wants a registry of Muslim citizens, and fascism appears to be on the rise across Europe, no one who is “just joking” – not furries, YouTubers, or 4Channers – can be annoyed if the media labels them Nazis.

I do agree that fundamentally it is important to combat the left’s tendency to label everything right-wing “Nazi” or “racist”. Internet subcultures are not wrong to attempt to challenge this and other examples of left-wing extremes. Yet if this is what they really want, then one – very pressing – question remains. Why the fucking coat?