This post was originally published on our general election site, May2015.com.

Lord Ashcroft’s seat-by-seat polls of Scottish constituencies have confirmed what national polls have suggested for months: the SNP are set to win more than 50 Scottish MPs (out of 59), and redraw the political landscape.

The polls findings show an SNP surge beyond the expectations of an even the most optimistic nationalists, and confirm that a hung parliament is a near inevitability.

Ashcroft’s polls, leaked ahead of schedule late last night,  surveyed 16 of Scotland’s 59 seats, and put the SNP in front in 15 of them. Many of these seats are long-time Labour heartlands where the party have majorities of 30-40 per cent. And yet Ashcroft gives the SNP leads in almost all of these seats. Only Glasgow North East, which Labour won by nearly 16,000 votes in 2010, is set to remain in Labour’s hands.

The graphic below lists the fifteen seats where Ashcroft has put the SNP ahead, and compares the majorities he is showing for the SNP with the way each seat voted in 2010. 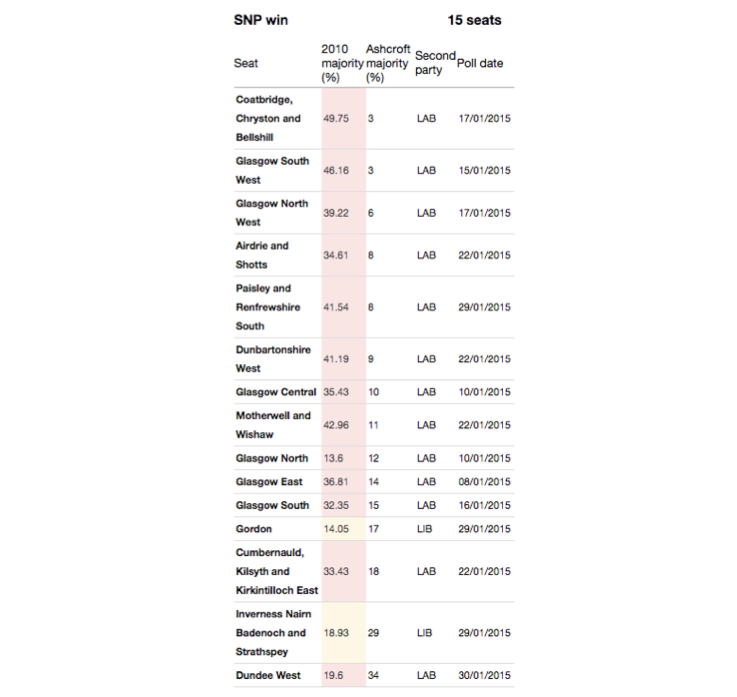 This includes the seat of Douglas Alexander, the shadow foreign secretary and Labour election chief (Paisley and Renfrewshire South), and the seat of Danny Alexander, chief secretary to the Treasury and senior Lib Dem (Inverness Nairn Badenoch and Strathspey).

Danny Alexander’s political career appears to be the over: Ashcroft put the SNP ahead by 29 per cent in his seat. Douglas Alexander’s seat is still winnable for Labour, but he won his seat by nearly 17,000 votes in 2010. For the SNP to now to be ahead in seats like his has no historical precedent.

The swing from Labour to the SNP across Labour-held seats is 25 per cent, which means majorities of up to 50 per cent could be overturned in May. If we apply that across Scotland, May2015 estimates that the SNP would win 56 of Scotland’s 59 seats.

If we apply Ashcroft’s polls across Scotland, the SNP is projected to win 48 per cent of the Scottish vote, and Labour just 23 per cent. That is a complete reversal of 2010, when Labour won 42 per cent and the SNP 20 per cent.

This also confirms recent Scotland-wide polls. Since the referendum the SNP have polled a low of around 40-42 per cent, up to a high of 50-52 per cent.

This projection – for the SNP to win 56 seats – lines up very well with the projection our model makes if we just use this week’s Scotland-wide YouGov poll. That put the SNP on 44 per cent and suggested the SNP would win 54 seats.

Despite these national polls, all four of the forecasts tracked on May2015 have until now forecast the SNP would only win 31-40 seats.

That will now change. Academic forecasts like Election Forecast will discount these polls and may not show the SNP winning as many as 50 seats, but nationalists now seem almost certain to be the third largest party in Westminster after May.