Quietly, on 4 November, the Covid-19 pandemic reached a turning point. The first pill treatment for the virus was approved.

This means that people who are most at risk of experiencing severe Covid-19 symptoms can be treated at home – which could potentially halve hospitalisations and greatly reduce deaths.

The UK was the first country in the world to give the greenlight to the oral antiviral, Lagevrio (molnupiravir). The Health Secretary, Sajid Javid, called the drug a “game-changer”, although the news was eclipsed by Cop26 and the government’s fateful vote to protect Owen Paterson – the now former MP who is accused of corruption.

Some trials for the treatment took place at the Royal Free, the hospital in north London where the second coronavirus patient in England was admitted in February 2020. The Royal Free was famed during the first coronavirus peak, after harrowing scenes of its wards were captured by the BBC documentary Hospital. 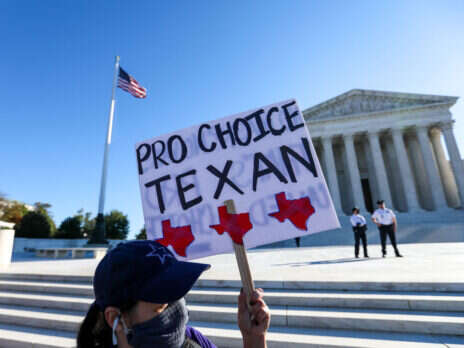 [See also: “We’re preparing for another spike”: A London NHS hospital chief reflects on the peak of Covid-19]

Following a bruising 21 months since the hospital admitted its first Covid-19 patient, there is now cautious optimism within its brutalist Sixties walls.

An economist and self-described “NHS lifer”, Clarke, 53, began her career at the Royal Free as a finance trainee in 1991, and has headed the trust since February 2019.

Talking over video call from her office, where colleagues wore masks at their computers, Clarke said: “We’re still technically in a pandemic, but you can see it moving towards being a disease that is more endemic. The antiviral drugs and vaccines are going to make it an endemic disease, in more developed countries.”

Yet she warned that the virus will “only become endemic if we continue to take the measures we’re taking, like wearing masks in hospitals, having Covid vaccines, and using these new antiviral drugs”.

[See also: Why everyone should watch the BBC’s Covid-19 special Hospital]

I asked whether the government should bring forward “Plan B” of its Covid-19 winter plan, as other health leaders have urged, which includes mandatory masks, vaccine passports and guidance to work from home.

“I don’t know what the public appetite for it would be,” replied Clarke. “Community case rates are still pretty high, people are still anxious. Coming out of a pandemic is not straightforward, and it’s quite easy to get this wrong…” Does she envisage another lockdown? “I would not predict another lockdown, but I’m well-known for making predictions that don’t come true!”

She is, however, unequivocal about the benefits of masks. “Mask-wearing seems like a very sensible thing to do,” she said. “We enforce that throughout our clinical areas in our hospitals, and even in the office areas where we work.”

“For me, mask-wearing in public places seems really obvious and I will continue to wear my mask on a Tube and all that.”

What did she make, then, of the Prime Minister Boris Johnson photographed mask-less during a visit to Hexham General Hospital in Northumberland earlier this week?

“I’m afraid I did [see the pictures], awkward, really, really uncomfortable for everybody,” she winced. “I don’t know what conversations were had, but we continue to enforce mask-wearing of anybody who comes into our hospital.”

Would she have told the Prime Minister to mask up?

“Well, maybe they did, who knows? He’s been to our hospital on a couple of occasions and he wore a mask each time, so I give you that. It’s really interesting: hospital leadership versus politicians. It’s really difficult. I feel for the leadership in that organisation. Case rates are quite high in Northumberland.”

From Hexham to the Royal Free, English hospitals are experiencing huge pressures caused by a record backlog that was built up during the pandemic: 5.7 million people are now on the waiting list to receive NHS care.

The government has announced a tax rise, the “health and social care levy”, which from next April will raise funds to help the NHS clear the backlog. Yet Clarke is concerned patients “waiting anxious or in pain” won’t move up the list any time soon – if there aren’t enough staff to treat them.

“If I’ve got 25 per cent more people on my waiting list, that would suggest I need quite a lot more doctors, nurses, therapists, pharmacists, etc, to clear it. There’s a real workforce gap and that’s a real problem.”

Job vacancies are between 8 and 10 per cent at the Royal Free. Across England, one in ten NHS nursing jobs are vacant.

“You can’t just fix this problem quickly if you don’t have enough staff to fix it,” she said. “Will we be able to make a real difference in numbers of patients waiting quite quickly? That’s the worry for lots of people like me.”

Mandatory vaccination, which ministers confirmed will be introduced for NHS frontline staff next spring, could also reduce the workforce.

“I’m worried, of course, that it will potentially make some people leave,” said Clarke. “But we haven’t actually seen that in social care [which has mandatory vaccination] yet.”

Overall, she believes the decision will “help” the hospital, and calls it “quite a late call” from the government.

As winter pressures close in, the hospital is also encouraging flu vaccinations. The Royal Free’s emergency departments are 25 per cent busier than they usually would be at this time of year. Over the summer, around 100 more patients came through A&E than usual each day.

Across the Royal Free and Barnet hospitals, there are currently around 80 patients in beds at any one time with Covid-19, and Clarke said that they are already at peak levels of bed occupancy, with 98 per cent currently in use.

While the beginning of the end of the pandemic phase of Covid-19 is in sight, England’s hospitals remain riddled with the legacy of the virus. After “ten years of austerity”, in Clarke’s words, when will patients begin to feel the effects of the government’s funding antidote?

This interview was corrected on 11 November 2021 to quote Clarke saying Johnson had been to “our” hospital, rather than “a” hospital, the mistake was due to a mishearing of the recording.