A year ago today, on the 9 February 2020, the Royal Free Hospital in north London admitted its first Covid-19 patient. The patient was the second coronavirus admission in England, and had been skiing in the French Alps with a man who had contracted the virus during a business trip to Singapore – later labelled in the press as a “super spreader”.

The Royal Free was one of five hospitals first designated to admit suspected Covid-19 patients. They were taken in for testing and kept in the hospital’s specialist high-level isolation units, where Ebola patients were treated in 2014-16.

Later in February, as the weeks went on, people very unwell with Covid-19 started arriving. For hospital staff at the Royal Free, it was the beginning of the first wave – peaking over Easter last April over four particularly gruelling weeks. 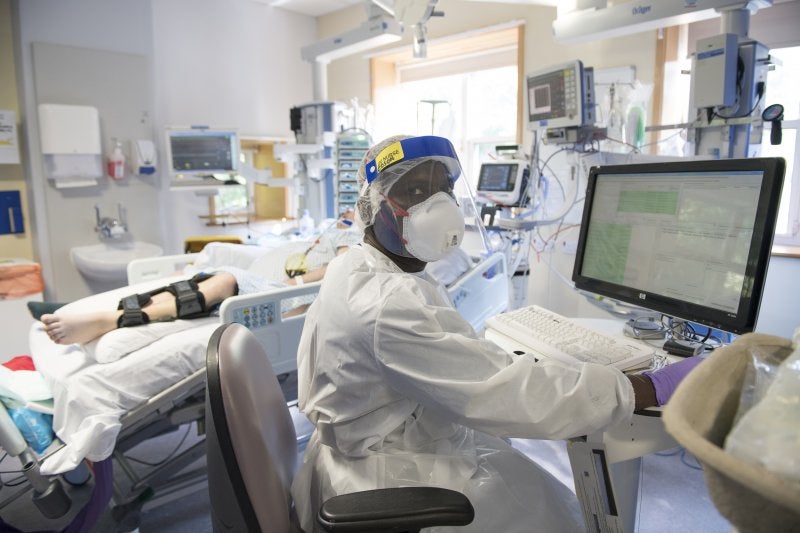 At the time, the hospital was in what she called “phase two” – stepping up the surgery and clinics that had been on pause as Covid-19 numbers fell. “Super Saturday”, when restaurants, pubs and bars in England reopened after lockdown, was a month away, scheduled for 4 July.

Slemeck warned in her column that “with lockdown easing, we’ve got to be ready for another spike”.

This February, the New Statesman caught up with her again to hear how the hospital is dealing with the second wave that she predicted. 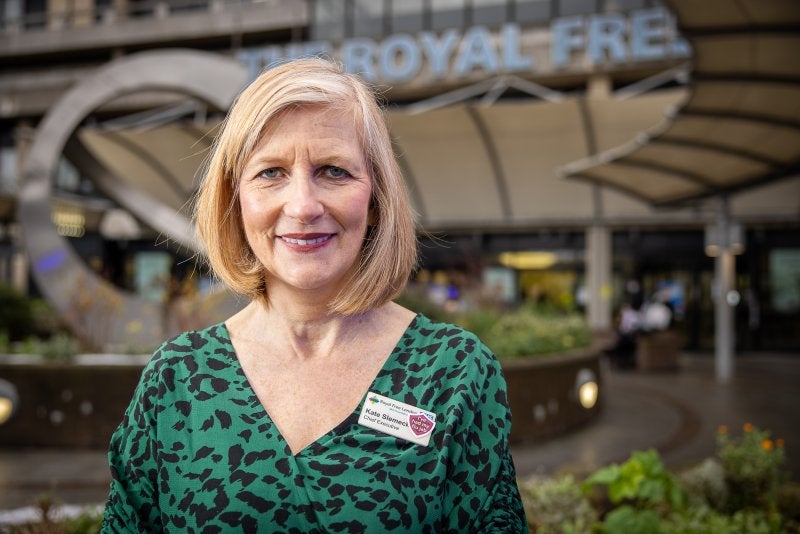 Covid-19 numbers fell to almost zero over summer at the Royal Free. Staff, however, were still working hard – stepping up non-coronavirus care that had been delayed. This was known within the hospital as the “restoration”.

“For a period of time, it sort of felt like we were getting back to normal,” Slemeck told me.

It wasn’t quite normal, though. Just 30 per cent of outpatients had in-person appointments over the summer, with the rest seeing doctors remotely. That’s one of several trends that look set to continue. “The virtual way of working will, I think, be absolutely with us forever,” said Slemeck.

And then there were the masks, social distancing and avoidance of big groups and crowded waiting areas: “We’re always going to have to think about that in the future.” 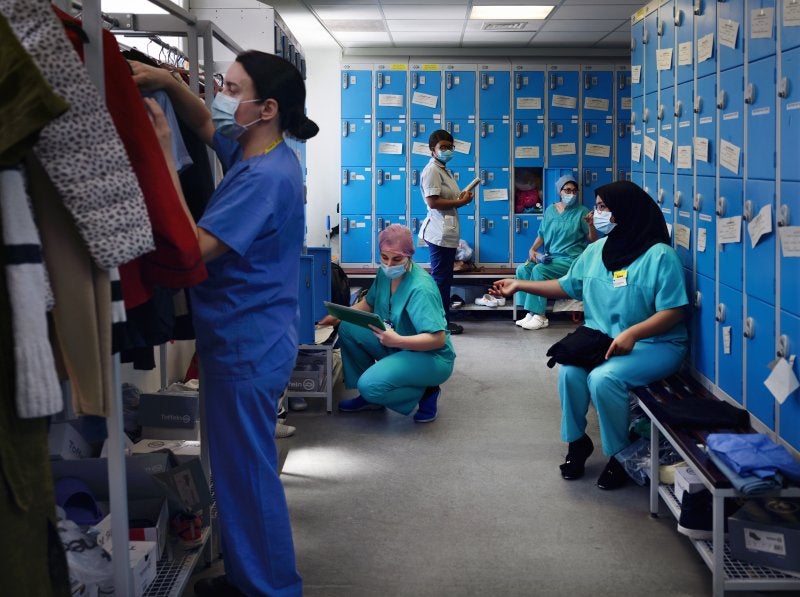 Yet this shift was not reflected outside of the hospital.

So-called travel corridors were listed by the UK government for Brits to go abroad without quarantining; the Chancellor Rishi Sunak introduced an “Eat Out to Help Out” scheme for half-price meals in August; and workers were encouraged back to the office with Prime Minister Boris Johnson telling the public to “go back to work if you can”.

“I think it did create some anxiety,” said Slemeck, of these policies.

While the easing of lockdown helped staff “socialise again, and everybody felt in their heart of hearts they wanted to get back to some sort of normal”, the summer felt “a bit surreal”.

[See also: “We’re preparing for another spike”: A London NHS hospital chief reflects on the peak of Covid-19]

“We still had some people with Covid coming into the hospital – though the numbers were really quite small, obviously we were very aware about the importance of washing hands, wearing masks, social distancing…

“While the summer did feel a bit more normal, I think there was an anxiety around it all coming back again if people mix too much, if people don’t behave, if people don’t wear masks, don’t socially distance,” she added.

“We all know if we have a few drinks you stop thinking about those things, don’t you? We’re all human at the end of the day. So I think there’s always been a bit of a worry that that would lead to the numbers going up, which of course none of us wanted to happen.”

As soon as people began travelling, “you could see the Covid numbers beginning to creep up again”, she recalled.

Yet they only began rising significantly mid-November.

“The big surge was around the middle of December, and I think it was definitely linked to the more transmittable strain of Covid,” Slemeck said. “It’s almost like something changed – we were ticking along, expecting the numbers to go up more in the colder winter months, but suddenly around 20 December the doubling rate was every five days.” 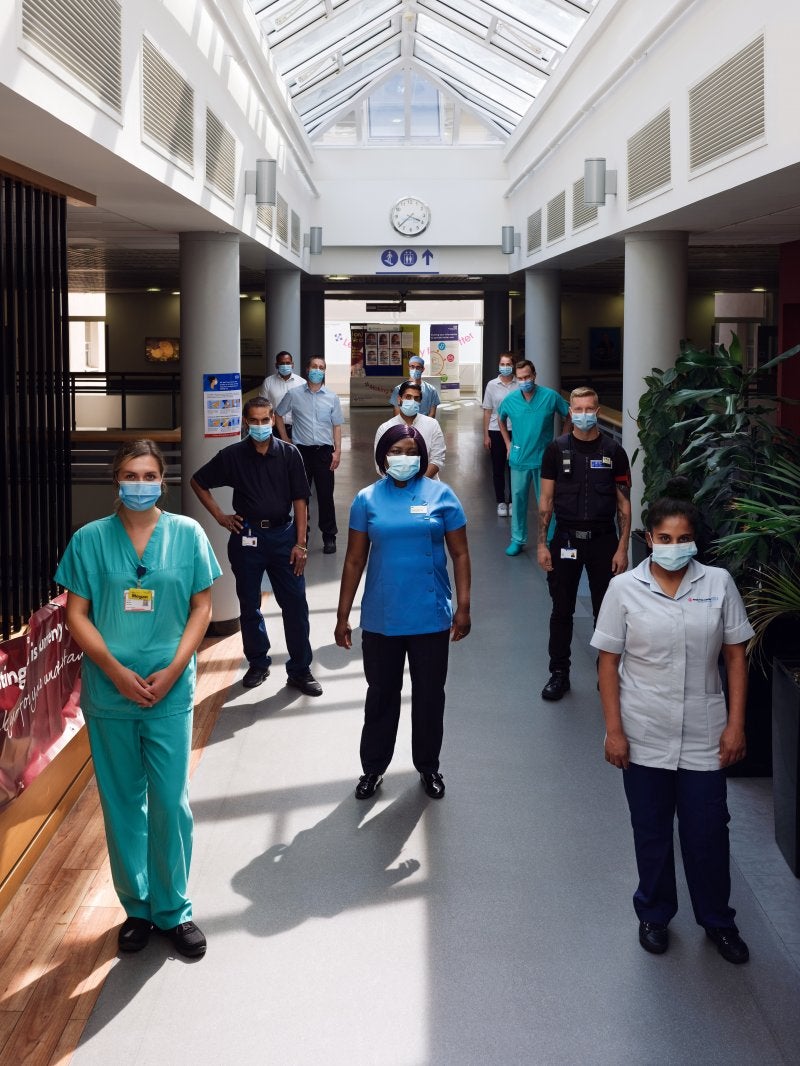 The timing was a “cruel blow” for staff, who had missed out on family time and bank holidays during the previous peak over Easter 2020.

On 24 November, the government announced three-household “bubbles” would be allowed for five days over Christmas – having to cancel and water down these plans just weeks later.

“There is a bit of frustration about that” back-and-forth among hospital staff, said Slemeck. “The Christmas issue was really tricky – it was absolutely right not to have mixing over Christmas and we are learning from other countries that had mixing and how devastating that has been…

“Everyone gets a bit frustrated – it’s difficult to make the right decision at the right time, but I think there’s always a bit of frustration about… In the main, staff just get their head down when they’re here, do a fantastic job and probably leave a lot of that behind, and deal with that when they get home.”

With lessons learned from the first wave, the hospital implemented its “surge plan” – doubling its usual number of ICU beds to 122 by working with Barnet Hospital (also part of the Royal Free London Foundation Trust).

The hospital trust used at least a third more critical care beds than in the first wave. During the peak, on 5-6 January, 70-80 per cent of wards were Covid wards. When I spoke to Slemeck on Friday 5 February the numbers were “not far” from this peak – 110 critical care beds were still occupied.

“The reduction is very, very slow,” she told me, describing this stage as a “plateau”.

Cases fell rapidly after the previous peak, but are stubbornly high this time round (“we don’t really know why”). Another difference from the first wave is the significant number of younger patients, some in their 30s, needing critical care. Wards have admitted multiple members of the same family: “Father and son, mother and daughter – which has characterised this time more than the last experience.” 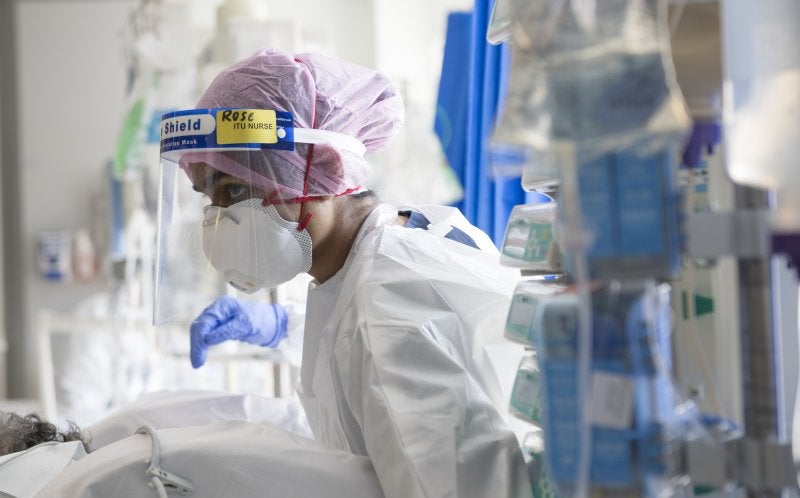 Critical care staff have been under prolonged pressure. It’s been necessary to seek help from other London hospitals, the military and medical students, plus doctors and nurses redeployed from other parts of the hospital.

Although the Royal Free has set up psychological support for its staff, Slemeck predicts problems with mental health and wellbeing will manifest later.

“Some staff just want to finish their shift and get out – they don’t want to talk to someone or necessarily debrief,” she said. “So we know this is two, three years’ work ahead of us of really supporting staff through what they’ve experienced, when they’re ready to talk.” 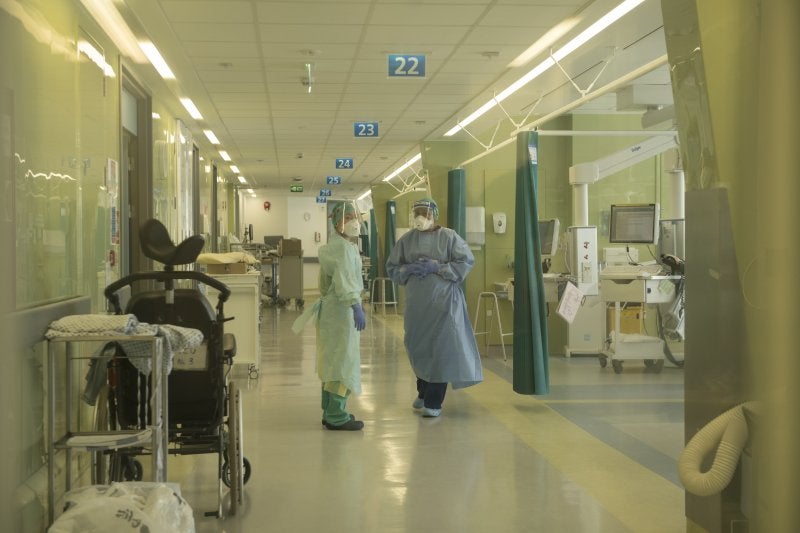 The one glimmer of hope on the horizon comes in the form of the vaccine rollout. The Royal Free was one of the first hospital vaccination hubs in the UK, and has administered over 16,000 jabs over the three hospital sites at the time of writing.

“Everyone loves the vaccination centre – if you want to go somewhere and feel real positivity, it comes from there,” said Slemeck. “It’s one of the popular redeployment opportunities because it feels like you’re contributing to a positive future.”

But while staff derive hope from this vaccine drive, there is always the prospect of a third spike. “I imagine even if there is a third rise – well, who knows. We hope the vaccines can protect people, you never know with new variants – we’ll be ready if we have to deal with it…”

“Let’s hope there isn’t a third wave, but I think we need to be ready.”