Despite last minute concerns that a Boris Johnson bounce would ruin her own honeymoon, Jo Swinson’s Liberal Democrats have cut the Prime Minister’s majority to one with a decisive 12 per cent swing to her party in rural Wales. But how many seats are there like Brecon and Radnorshire? In short, could Boris Johnson’s Lib Dem problem make him think twice about a snap general election?

There are two areas that matter most to the Liberal Democrats. First are the seats like Brecon and Radnorshire, which narrowly voted Leave but where their longstanding strength makes them a political presence. While this made yesterday’s by-election a must win, it’s worth noting there is a tranche of another dozen Conservative-Lib Dem marginals where the party is even closer to being first-past-the-post.

Second are places like, to take one example, the new Foreign Secretary Dominic Raab’s constituency of Esher and Walton in Surrey. The party has never won Esher and Walton, and finished a distant fourth in the constituency in 2015. On the other hand, 58 per cent of voters supported Remain there. The Liberal Democrats doubled their vote there in May, putting them neck and neck with the combined Conservative and Brexit Party vote in the European elections.

Taking these two types of seat allows us to create a weighted model to work out the sweet spot, where these two things interact. 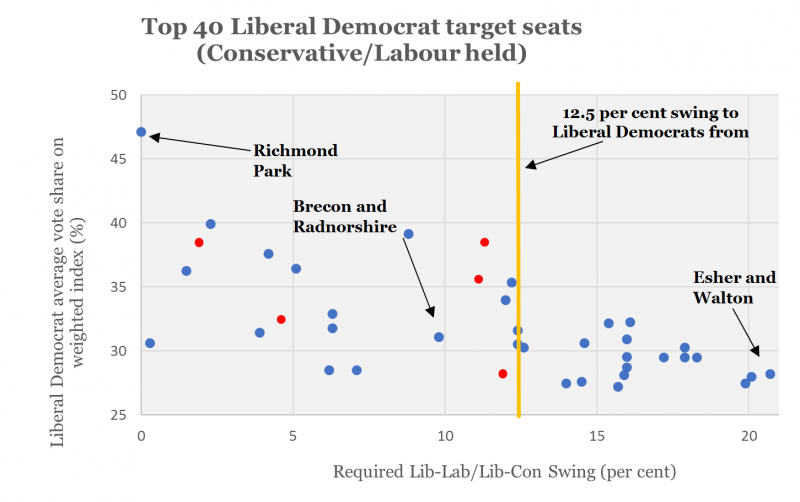 The higher the party’s score, and the higher they are on the graph above, the better it has done historically in each constituency and the higher the number of new, motivated, Lib Dem voters (particularly in the 2019 European Election). The classic example is the super-marginal Richmond Park which, if the polls are anything near right, is highly likely to fall to the yellow team in any election. This is on the top left of the chart.

The next big question we need to answer is whether the electoral map can shift fast enough for another tranche of seats to become yellow-blue marginals. And, if it does, the evidence suggests a new front of Richmond Park-style seats in the Brexit election battle in the south of England, which could turn yellow.  Working from left to right, the chart shows us how big the swing would need to be from each seat’s current holder to the Lib Dems to pick it up.

If this holds, the Liberal Democrats would be looking at 23 gains in England and Wales. Eighteen of these would be Conservative held (of which Brecon and Radnorshire was the 13th most vulnerable). Five would be gained from Labour.

Then it gets more interesting. The next 20 seats that are most vulnerable to a Lib Dem challenge are all Conservative-held. Working your way along the graph, swings from 13 per cent to 20 per cent would turn a swathe of England from blue to yellow. Esher and Walton, on the cusp of the right-hand side, would need a significant swing. Yet these are seats where – on the whole – their vote has held up less well through the last three electoral cycles.

This is where tactical voting – and perhaps the sort of formal inter-party co-operation we have seen in Brecon and Radnorshire – could make the difference in producing results for the Liberal Democrats above the notional national swing.

The party can perhaps take some encouragement from its darkest days in 2015. After all, for Liberal Democrats, life can come at you fast. In 2015, when the party lost 86 per cent of their seats and 66 per cent of their vote share, some of the swings against the party were monumental: 30.5 per cent, in Hereford and South Herefordshire; 35.8 per cent in Brent Central. Now, the electorate is even more volatile, and the swings they would need are only two-thirds the size.

Of course, this sort of volatility could mean some seats that are currently Labour-Conservative seats and don’t make the graph – for example Battersea, where the party lost their deposit in 2015 – could become areas where the Liberal Democrats contest. This potentially puts extra seats in play for the Conservatives in England and Wales, though the 2017 general election indicated voters motivated by Brexit were more able than ever before to place their vote tactically.

These feasible gains for the Lib Dems, combined with the 13 Conservative seats in Scotland that look incredibly vulnerable for Boris Johnson, would leave the Conservative Party needing to make 30 gains into Labour territory to tread water on current polls. Concerted tactical voting could put as many as 50 Conservative seats at risk.

Polling suggests Prime Minister Johnson might yet unite the Leave vote, putting the necessary clear distance between the Conservatives and the other parties to make the numbers stack up. But the Lib Dem challenge demonstrates the size of the task. Given the unprecedented volatility of the UK electorate, the political map for the party is shifting quickly. And, as the Liberal Democrats can attest, sometimes the electorate can give you a real shock.