It’s increasingly common to hear the idea that MPs have removed the possibility of a no deal Brexit; plenty of MPs themselves are prone to saying so.

Yet there was a very different message being heard by the UK in a Changing Europe initiative, where our Brexit Policy Panel, made up of over 100 of the top social scientists in the UK who study Brexit, has been tracking the likelihood off no deal for over a year.

Currently at 59 per cent – a probability that has fast risen from 38 per cent in March and 51 per cent in June – the chance of a no deal is the highest it’s ever been.

And it’s worth pointing out the team at the New Statesman tend to agree that no deal is the most likely single Brexit outcome: the latest Sunday Call no-deal-o-meter puts the chances at 50 per cent.

In short, this is because we still have a government that is publicly committed to a no-deal Brexit if necessary to enact our leaving of the EU, and a governing Conservative Party that is likely to reaffirm that commitment in any upcoming general election.

As a result, the short-term implications of a no-deal Brexit are increasingly entering the public domain: either through government adverts that pronounce the UK’s departure on 31 October, or redacted (and altered) internal government memos that (partially) lay out the likely implications for UK citizens. 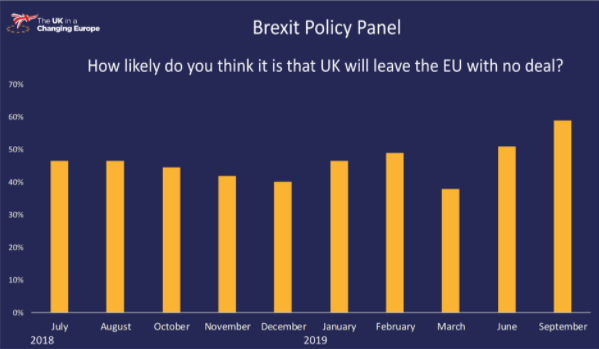 Given all this, it is possible (indeed it’s a human instinct) to lose sight of the long-term picture. Yet this focus on no-deal disruption has meant that medium- and long-term messages are not being heard. The nearest the vital medium-term message – that no deal is a comma in negotiations rather than a full-stop, and the UK will renegotiate from a weaker position if we fall out without a withdrawal treaty – has come to being effectively communicated in the UK has been by the Irish leader Leo Varadkar, rather than any British politician.

The long-term message – that the UK economy will be up 9 per cent than it would have been without withdrawal from the EU – is even further from view. This is important as, if you were a Leave voter, you are actually more likely than not to accept that there will be at least some short-term disruption from a no-deal Brexit. It is the perceived long-term benefits that sustain your enthusiasm for the Brexit project.

At the UK in a Changing Europe we asked YouGov to poll voters on what they expect the implications of a no-deal Brexit to be in five years’ time. The good news for the Leave campaign is that its core messages – that if we leave the EU trade with the rest of the world will go up and immigration will go down, and this would result in a rise in jobs – remain broadly accepted by voters. 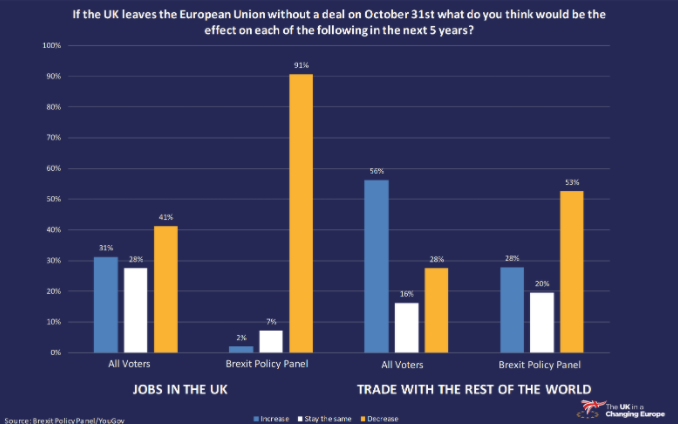 On the number of jobs in the economy, our panel are near-universally negative: over 90 per cent of experts think no deal will lead to fewer jobs than there would otherwise have been. Voters are much more evenly split, and much more sanguine: 59 per cent think the number of jobs will increase or stay the same.

So our panel of experts and the good folk at the Staggers are on roughly the same page that a no deal is now more likely than not. But when it comes to the consequences, the voters and experts are on a completely different page entirely.