On Monday afternoon, Gateshead Council released a long statement on Facebook, in which it assured the public that “the street lights in Gateshead will not give you cancer”.

The statement went on to state that “Gateshead Council DOES NOT use 5G technology in any of its street lights, or in any other capacity” and that its “street lights will not induce miscarriages in pregnant women, or cause insomnia, or nosebleeds, and they are not killing all the birds and insects.” 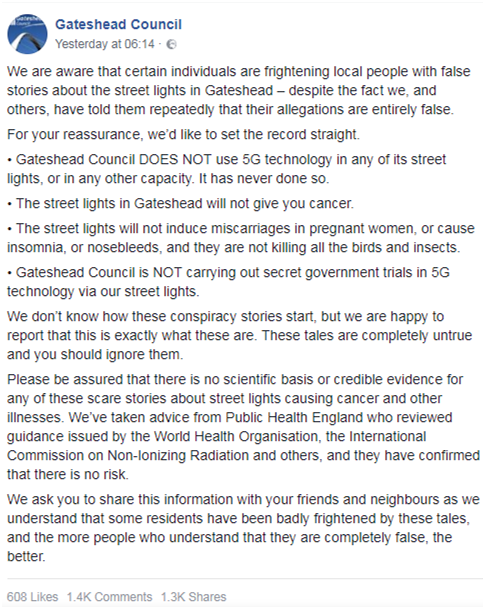 The Facebook post, possibly Gateshead Council’s most popular ever, currently has 1,400 shares. While most comments are some variation of the same joke (they would say that, wouldn’t they?), some are weirdly anti-street light, with one Facebook user declaring: “I don’t believe any of that rubbish, but the lamps are barely worth bothering with, they shed so little light they’re a waste of time.”

I ask Iain Lynn, the currently very busy head of the communications team at Gateshead Council, how these rumours about the latest generation of mobile technology began. Lynn says he doesn’t know, having only become aware of just how widespread the fears are in the past week, when candidates began canvassing ahead of the local elections. It was during their door-knocking sessions that councillors encountered a surprising number of constituents with concerns about Gateshead’s street lights.

Lynn says that the statement was released to reassure the old and particularly vulnerable residents, after claims about the dangers of street lights spread through local Facebook groups.

Steele tells me that in the winter of 2016, his neighbour alleged that the new street lights outside her home were causing her nose to bleed every night. Steele initially dismissed the link. But then another neighbour later complained that she, too, had suddenly starting having nocturnal nose bleeds.

Steele, who designs motorcycle helmets, used a radiation meter from his work to test both his neighbours’ bedrooms – claiming to have discovered dangerous levels of radiation.

According to Steele, the Council “fobbed him off” when he asked about it a few months later. He submitted a Freedom of Information request, which gave him a product sheet of all the 32,000 street lights in Gateshead. He has brought the issue up in public town-hall meetings too, although he says that governmental officials refuse to take him seriously.

The council insists that the street lights use previous generations of mobile technology, 2G and 3G, in order to ensure that the light “instruct lights to turn on/off and dim individual lights at quiet times”. It adds that the transmitters used were “off-the-shelf” and that the company producing them had won the Queen’s Award for Enterprise.

Steele, though, believes the council has instead bought a 5G system, which can effectively provide a 3D map of the homes of each Gateshead constituent. The purpose of this map? “A dystopian world in which everything you take into your home is mapped, and if you put something in the wrong bin, you instantly get a fine.”

Steele further alleges that the 5G radiation has led to the wipeout of moths and other pollinators in his local environment. He says he knows six beekeepers, one of whom is his brother, and that all of them have had their colonies massacred.

While Gateshead’s statement may have only increased the visibility of the conspiracy theory, communications chief Lynn says he is glad they released a statement, and that several members of the community have got in touch to say that they are grateful to see it. Before I hang up the phone, I ask Lynn one last question. Did the council, as the statement seems to suggest, genuinely get in touch with Public Health England about these fears, asking for advice? Lynn laughs, and says they checked the website. Outside in the darkening street, the street lights flicker on, and I am left wondering…