Rejoice, first time buyers! Rejoice! Chancellor George Osborne, your friend and mine, has come up with a nifty new scheme to help you save your deposit.

For every £1 you save in a new first-time-buyer ISA, the government will top it up by an extra 25 pence – up to a maximum of £250 a month. In all, the government is willing to give you an extra £3,000, effectively for free. Can’t say fairer than that.

Except, actually you can – because today’s Budget was a bit light on measures to increase housing supply. Without such measures, house prices will continue to climb inexorably. And, unless that changes, this scheme isn’t going to be that helpful for anyone who doesn’t already have a pile of money.

Demonstrating this gets a bit maths-y, but bear with us. The Office for National Statistics produces a house price index, which stood at 100 in February 2002. By December 2014, 154 months later, it had more than doubled, and stood at 206.9. Do some sums, and you’ll find that, over that 13 year period, house prices on average increased by about 0.4732 per cent each month.

(Obviously, they didn’t do anything of the sort. Reality isn’t that straightforward: there are booms and busts, different regions see different trends, and so forth. Nonetheless, we’re only looking for a sense of the way prices increase over the long term, so this’ll do for our purposes.)

Let’s assume this growth rate continues: each month, house prices continue to increase by 0.47 per cent. Last August, the average first-time-buyer deposit stood at £27,719, but that was seven months ago so, assuming that the proportion of your house price you need to save for a deposit has stayed the same, the average deposit will now stand at £28,650.

Now imagine that a 25 year old hears of Osborne’s generous new scheme, gets all excited about it, and starts saving £200 a month this very day, just to get hold of that £50 government top up. Assuming the ISA pays an annual interest rate of approximately 3 per cent, which isn’t bad going right now, it should take them just over eight years. 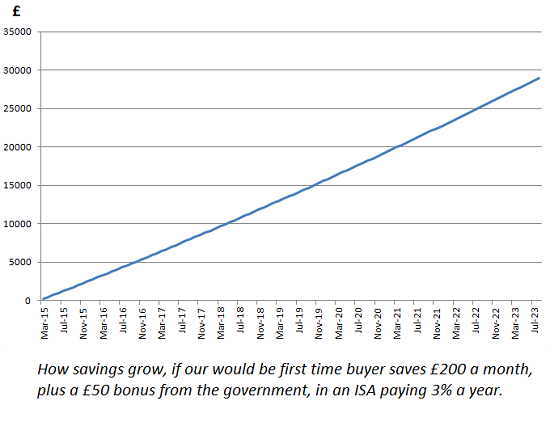 Except that they won’t.

One reason is that we’ve forgotten about that £3,000. Our putative homeowner, who is stretched enough that they can only save £200 a month, runs slap bang into that target in March 2020, several years before they’ve reached their goal. After that, they’re on their own, so the graph of their savings actually looks like this: 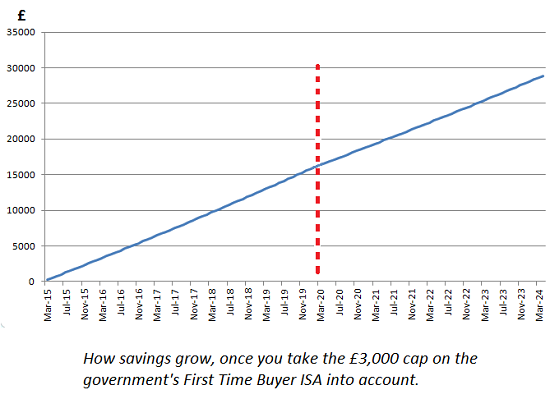 The point at which the government bribe comes to an end, and the rate of growth reduces, is barely visible (hence our broken red line to highlight it). But it is there, nonetheless: now our plucky saver doesn’t reach their target until April 2024, a good eight months after they’d first expected to.

But even if that weren’t true, they still wouldn’t be able to climb onto the housing ladder, because house prices are growing, too. By April 2024, on long run rates of growth, the average deposit should stand at £47,929. If our poor hard-working renter keeps saving their £200 a month, they’ll get to that target by August 2029, by which time the average deposit is £64,836. They’re still £17,000 short.

What’s really insidious is that, unless they save more, they always will be. Around August 2030 (by which time our 25 year old is 40 and still doesn’t own a house), the increase in house prices each month becomes larger than the increase in our renter’s savings. Each month, rather than the target getting closer, it begins to recede into the distance. 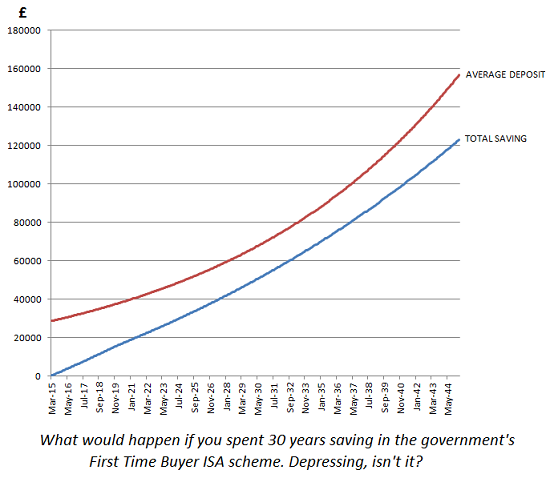 If the government were to extend its free money scheme, that point would come a few years later – but it would still come.

There are a lot of assumptions here – about interest rates, the rate of house price increase, and so on. You’d hope that someone who can save £200 now should be able to save a bit more than that in future.

In practice, many first-time buyers aren’t individuals, but couples; and it’s in the nature of averages that a fair few people be buying with smaller deposits. It would be untrue to say that Osborne’s scheme won’t be useful to anyone, because it clearly will.

But the people it’ll be useful to are mostly those who are already sat on a big pile of money with which to buy a house, and just need a little bit of help to get them over the top. If an individual first-time-buyer relies purely on the government backed ISA, then they will never, ever reach their savings target. Despite what the government has implied, saving £250 a month simply isn’t enough. Either house prices have to come down, or ISA interest rates have to go up, or they need to find a hell of a lot more than £200 a month.

Oh, and this is assuming that pumping more money into the housing market without significantly increasingly supply – as this government has repeatedly done – won’t push up house prices yet further. Which it almost certainly will.

If you’re a first time buyer, don’t let Osborne fool you: he hates your guts.