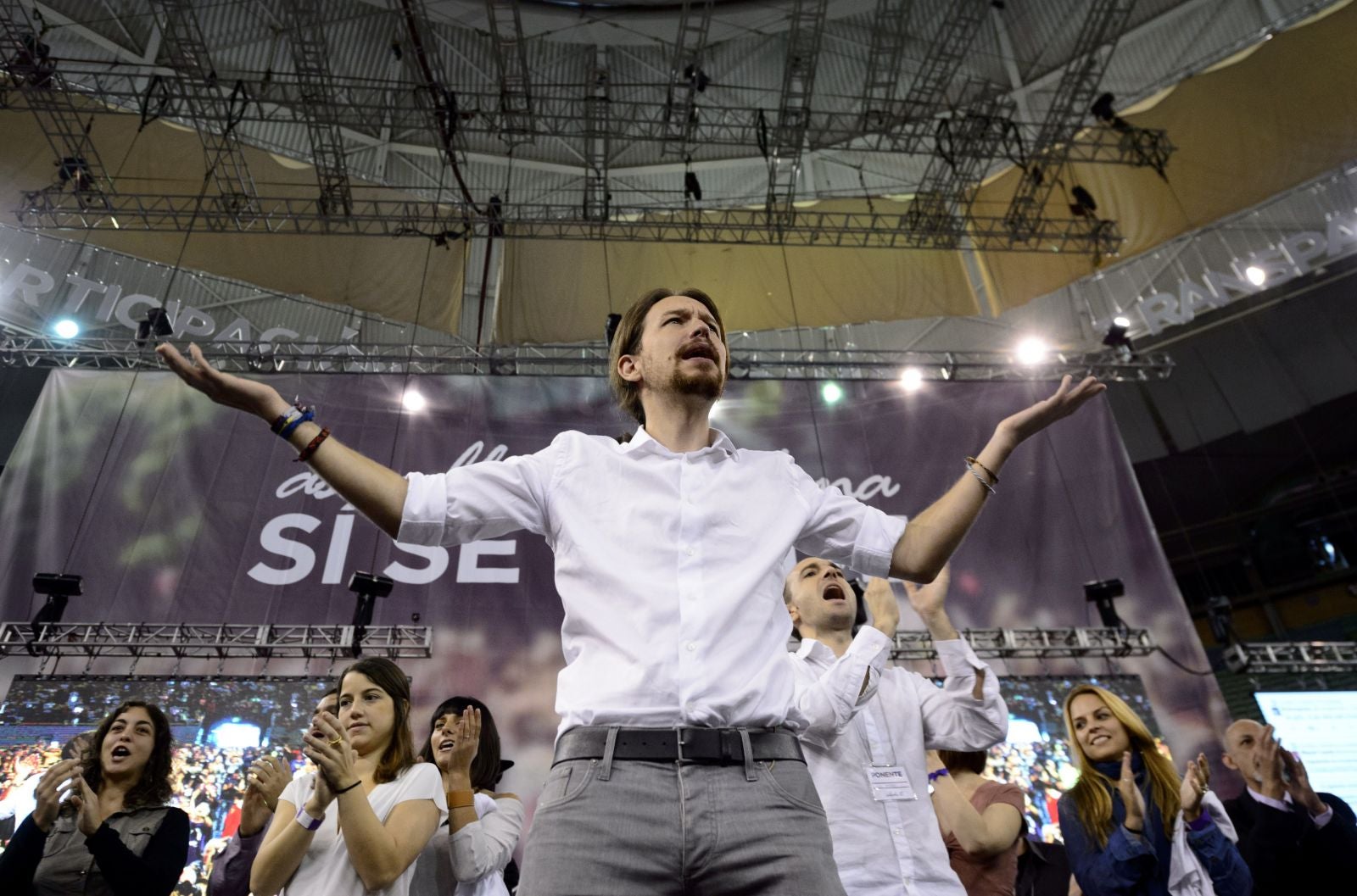 “Tick-tock, tick-tock”, chanted the huge crowd in the centre of Madrid last Saturday as they marched in support the new Podemos (“we can”) party. Counting out what they – and many others around Europe – expect to be the last days of the existing Spanish political order, Podemos supporters take heart from recent polls and the Syriza victory in Greece.  The party came from nowhere to win over a million votes and take 5 seats in the European parliamentary elections last May. According to some polls almost 30 per cent of Spaniards could vote Podemos at the next general election – 5 points clear of their nearest rivals, the leftist PSOE. Given that PSOE, founded in 1879, is one of Europe’s oldest social democratic parties while Podemos has only just celebrated its first birthday, this is a remarkable result.

Like Syriza in Greece, Podemos is often pigeon holed as “anti austerity”, “radical left” and “Marxist”. Those labels may work for some of its policies but does not begin to describe the movement’s broad social base. The Podemos upsurge is far from a revolt of the crisis-hit poor and huddled masses. In fact, much of the party’s support comes from the well-healed, tech-savvy and most educated. Data from the official sociological research institute (CIS) and leading polling agencies all tell the same story: this is largely a movement of the middle class and the young. The latest CIS data reveals that support for the party amongst the upper middle classes, for example, nearly doubled last year and that 25 per cent of them now say that they will vote Podemos at the next election. Astonishingly, this is almost 10 points above the traditional choice of the Spanish bourgeois, the governing centre right Popular Party (PP).  The professional middle classes and graduates are also turning to Podemos in greater numbers as are skilled manual workers – around one in five of both groups now identify themselves as Podemos supporters.  By contrast there are two groups where the party appears to be making little headway: the unskilled working class and those without any qualifications. Youth is another key constituency for Podemos. A quarter of 18-35 year olds look likely to vote Podemos as will around one in five of those in their 30s, 40s or early 50s. Amongst pensioners, however, support slumps to single figures.

The irony of a left-wing party harnessing middle-class support is even more evident when compared with what is going on in Britain.  This year “outsider” parties will mount serious electoral challenges to the political establishment in both Britain (Ukip) and in Spain (Podemos). Yet the two are very different not only in their policies but in their core vote. While the right wing Ukip is drawing support from older, unskilled working class voters without formal qualifications the reverse is true for the left wing insurgents of Podemos in Spain who are tapping into a middle class vote.

Despite being tagged as ‘radical left’ Podemos is actually fighting hard for centre ground votes. Around 40 per cent of Spaniards define themselves as “moderate” and in the ideological centre of Spanish politics. Podemos is now the preferred choice for a third of this group – level pegging with the number who say they will support PSOE and twice the number of those who say they will support the PP. It has been a golden rule of post Franco democratic Spanish politics that elections are won by the party which commands most support in the centre. On the current data Podemos are well on their way to consolidating exactly the level of support they need amongst moderate Spaniards to win the next election.

The reasons for Podemos’ success goes way beyond an anti-austerity message. One of the party’s most successful attack lines is against what they call la casta (the caste or the class).  The phrase resonates with many Spaniards and describes the over cosy relationship between politicians, oligopolistic business interests and an inert bureaucracy which is protected by some of the weakest freedom of information laws in Europe. The British equivalent of la casta might be the “Westminster elite” but this translation does not really do the job. Anger at the entrenched elite in Madrid is also directed toward the leaders of Spain’s powerful, de-centralised regions which are frequently dominated by local political cliques.

Simmering discontent with the system has been evident for years. Ordinary Spaniards complained about an “extractive” government class while international reports on the Spanish economy from the OECD and others highlighted shortcomings which arise from the bureaucratic quagmire, low levels of investment and poor productivity.

All this came to head with the economic crisis. Unemployment has soared whilst the living standards for many of those in work – including, of course, the middle class – have been hit hard. But one issue above all others has fuelled support for Podemos: corruption. Spanish courts are now awash with cases of bankers, politicians and even members of the royal family accused of ripping off the public during the boom years. Corruption ranks alongside the economy as the issue which most concerns Spaniards and the old political parties are struggling to respond because it happened on their watch.

Whether Podemos can sustain their momentum depends on several factors some of which are beyond their control. If the new Syriza government in Greece fails it will contaminate the Podemos brand in Spain. The Spanish economy is picking up slowly and this may be enough for some voters to withdraw their gamble on Podemos. And there internal questions to be settled too – several key policies have not been thought through. It is also far from clear whether the party has the logistical muscle to mobilize a large number of first time voters and polls suggest many voters may simply abstain. Yet the Spanish establishment is rattled and rightly so.  The Spanish middle class is angry and the clock really is ticking.

David Mathieson is a former adviser to the late Robin Cook. He is on Twitter as @mathiesonmadrid