Just in time to create some more pre-conference jitters for Labour, today’s YouGov poll shows the party tied with the Tories for the first time since George Osborne’s kamikaze Budget in March 2012. The Conservatives and Labour are on 36%, with UKIP on 12% and the Lib Dems on 10% (no sign of a conference bounce there).

Time will tell whether it’s an outlier (YouGov has recently shown a Labour lead of around four points) but a year ago, when they trailed Labour by margins as great as 14 points, few Conservatives would ever have expected that they’d draw level just 12 months later.

On a uniform swing, the poll would still leave Labour just three seats short of a majority. This apparent bias has less to do with the unreformed constituency boundaries than it does with differential turnout (fewer people tend to vote in Labour constituencies) than it does to unequal constituencies. As a report by the University of Plymouth concluded: “The geography of each party’s support base is much more important, so changes in the redistribution procedure are unlikely to have a substantial impact and remove the significant disadvantage currently suffered by the Conservative Party.” 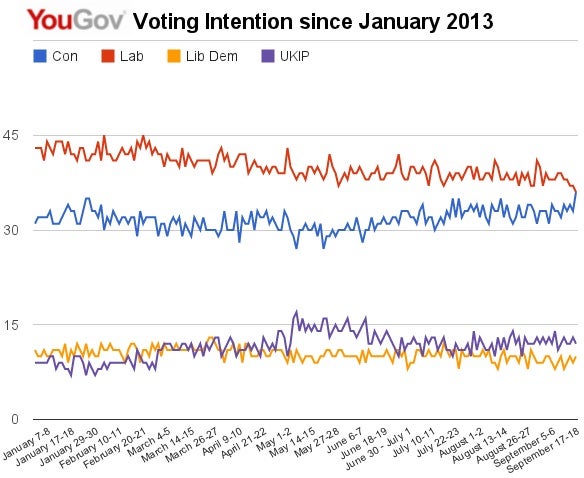 It’s important to remember that uniform swing calculations are an unreliable guide to election outcomes since they don’t take into account factors such as the incumbency bonus and above-average swings in marginal seats. Had there been a uniform swing in 2010, the Conservatives would have won 14 fewer seats, Labour eight more and the Lib Dems five more. But even if, as seems likely, the Tories perform disproportionately well in their existing seats, they will still need a lead of around three points over Labour to remain the largest party.

It does raise the possibility that the Tories could win the most votes with Labour winning the most seats (the reverse of the 1951 election). When I recently asked Lib Dem president Tim Farron how his party would act under this scenario, he said that while “morally” it should ally with the party with the most votes, “the arithmetic” meant it would have to favour the largest in parliament. But this rather ignores the fact that, unlike in 2010, both parties could conceivably win enough seats to form stable majority governments with Lib Dem support. As Andrew Adonis notes in his book 5 Days in May, Willy Brandt’s SPD administration in Germany and the current Swedish government are proof that second placed parties can legitimately assume power. The danger for the Lib Dems is that a dead heat in 2015 will cause a damaging schism between the party’s Labour-leaning left and its Tory-leaning right.