While we wait for Britain’s daily newspaper editors to get back to Harriet Harman about how many female journalists they employ (I wouldn’t hold your breath), the New Statesman has decided to take matters into its own hands regarding the lack of women in journalism. Over the two weeks between the 22 July and the 2 August, I recorded the numbers of articles written by women in eight national newspapers: the Daily Mail, the Daily Express, the Daily Mirror, the Telegraph, the Independent, the Guardian, and the Sun. Ten days, 80 newspapers, 9,258 articles. The results are in and it’s not looking good for the girls (or the Independent).

The average percentage, across the eight newspapers, of accredited articles written by females was a mere 25.30 per cent. The newspaper in last place was the Independent with female journalists contributing just 15.28 per cent of its accredited articles. The most proportional of the bunch – though not by much – was the Daily Express with 32.94 per cent and the Guardian, the purportedly progressive, upstanding member of the media community, was in third place with just 28.72 per cent. 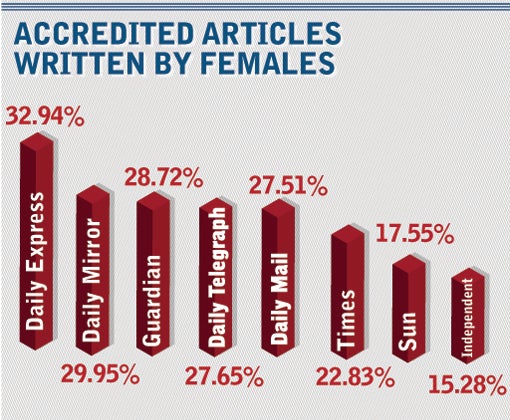 These percentages provide a blunt insight into the glaringly obvious inequalities that exist in the newspaper journalism industry. They call into serious question the supposed balance of our national press, particularly concerning topics of real substance, such as politics or the economy which require a range of perspectives to be articulated. While articles relating to “Westminster Politics” scored in just above the overall average with 23.96 per cent of articles being written by females, the “Foreign Affairs” and “Business and Economy” topics were below average at 15.91 per cent and 19.54 per cent respectively. In fairness, the picture isn’t quite so bleak at the broadsheets; The Times was almost proportional on “Westminster Politics” and the Guardian on the topic of “Business and Economy”, totting up 43.68 per cent and 41.91 per cent respectively. However, these stats demonstrate the fact that not only is our government dominated by men, but also the industry which sets out to scrutinise it is too.

The three topics which women were trusted to write about over men were “Property”, “Lifestyle” and “Fashion”. Our daily newspapers are perpetuating the gender stereotype that a woman’s place is in the home, preferably a well-decorated one and if you’re lucky, she’ll be wearing a size 8 Topshop dress and kitten heels.

Due to the prolific number of articles concerning the Royal Baby, my data is actually skewed in favour of female journalists, as the “Celebrity/Showbiz” topic had a much higher number of female-written articles (42.12 per cent) than the average topic. This suggests the reality could in fact be worse than my figures suggest. An explanation as to why the Daily Express is the most proportional newspaper is simply that just under a third of its articles relate to celebrities. Frankly, quibbling over percentage points is pointless – there was no day or newspaper in which the number of articles written by women came close to the number written by men. It was never even close.

Unsurprisingly, the Sport sections of all newspapers were the most male-dominated: a negligible 3.64 per cent of sports articles were written by women, with the Daily Express not having a single female sports journalist for the entirety of the two weeks. Women were often limited to writing about athletics (occasionally this expanded to include cricket). Moreover, their articles usually related to Jessica Ennis-Hill, rather than Usain Bolt or Mo Farah, for example. Male writers, on the other hand, were allowed the luxury of choice. Perhaps it’s the fact that she’s pretty, recently married and has contracts with the likes of Olay, but the controversy over Ennis-Hill’s current fitness level is about the deepest female sports journalism gets at the moment.

It’s not that women shouldn’t be writing about Ennis-Hill – she’s an inspiring and responsible role-model for young people all over Britain and deserves plenty of coverage. Much as it is annoying, there are currently more male sports stars and more male sports fans (although actually more women are watching football than ever). However, someone’s gender does not inhibit their capacity to report and comment on sport to the extent that during the period surveyed over 96 per cent of sports articles were authored by someone with a Y chromosome.

Moving on to the differing stature of the articles written by men and women, I also recorded the gender of journalists writing the main frontpage story in the newspaper each day. This is the most prestigious slot in a newspaper – the frontpage is a newspaper’s selling point and the main medium for it to make bold statements about the world. Therefore, the fact that only 21.84 per cent of these articles were written by women displays the fundamental inequality that exists in the newspaper business. Once again, the Times compares favourably, with more women than men writing their main frontpage story in the two weeks we recorded. In contrast, at the Telegraph fewer than one in ten main frontpage articles were written by women. I also discovered that there was very little difference in the percentages of women writing differently sized articles: of all the “short” articles women wrote 27.57 per cent, whereas women wrote 24.78 per cent of “large” ones. 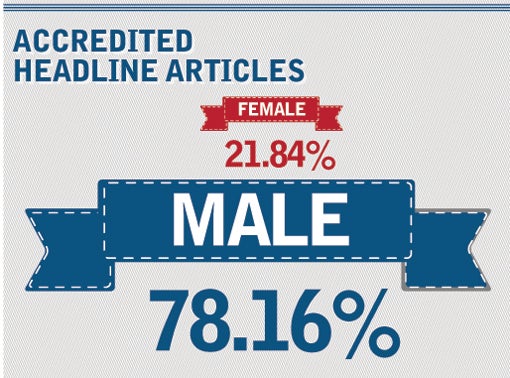 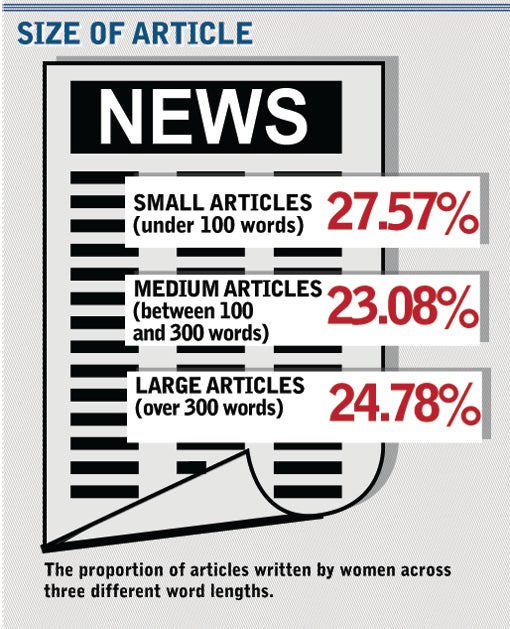 It’s no secret that men dominate British public life. But it doesn’t have to be this way. The media industry is, or at least should be, the voice of the nation, and if half of the nation aren’t being heard, that’s not good enough. So girls, pick up your pens and get writing, because the days of the brief-case carrying, be-Trilbied swarms of men walking down Fleet Street should be well and truly over.