Sarah Houston was 23 when she died after taking diet pills infused with the industrial chemical DNP, which she had bought over the internet.

The medical student had struggled with eating disorders for most of her life, crippled by the idea that she needed to lose just a little bit more weight to be passable. In absolute secrecy, she ordered the dangerous supplements which contributed to her death. Looking at the supersized pictures of this young woman gracing the tabloid news sites, you can see for yourself that she was completely beautiful; she had, to put it bluntly, model looks. But it didn’t matter, because the illnesses got her. And anorexia and bulimia are illnesses. It just so happens that the way a woman dying from them looks very much the dominant western model for female beauty.
Sarah Houston’s death made the news that model scouts have been targeting patients outside the Stockholm Centre for Eating Disorders seem, if possible, even darker. “We think this is repugnant. People have stood outside our clinic and tried to pick up our girls because they know they are very thin,” a doctor at the clinic told a Swedish newspaper. One of the patients approached was so ill that she was in a wheelchair; another was just 14.
The kind of person who would do such a thing is frightening in their lack of moral compass but also completely ridiculous. You can imagine them approaching a dying, emaciated girl, whose friends and family more than anything want her to get better, to put even the tiniest morsel of food in her mouth and chew. You can see them looking into her enormous eyes as they protrude from her starved face and telling her that her legs look fabulous. Give me a call.
It’s difficult to imagine any other disease being fetishised in a similar way – or indeed, any traumatic mental state being presented with a modicum of accuracy by the fash pack. We’ve seen weeping models used in fashion shoots, their glamorous, silken tears glistening beautifully before the camera lens, but we’ve yet to see ounces of snot pouring from a runny nose pictured on the pages of Vogue.
When women suffering from anorexia, straight from the eating disorders clinic, march through the door and into the face of a waiting camera lens on the arm of a talent scout, the effect will be the same: shine a flattering light on the angular cheekbones. Fade out the painfully defined spine and the angry tailbone covered by a film of translucent skin that renders sitting down an exercise in agony. Celebrate the tiny ankles, delicate and fawn-like in a pair of Louboutins. Hide the telltale signs of osteoporosis that lurk further up.
Airbrushing a picture of anorexia into acceptability has become as second nature to some in the fashion world as perfecting the ‘perfect crying face’ that nobody ever manages to pull in real life. Fashion’s fondness for strange, contorted positions has, after all, never manifested itself in the form of this season’s coveted hernia. But what’s next on this grisly conveyer belt? Perhaps cancer patients: they’re skinny, after all, and could carry their excised tumours around like handbags, trailing tubes from chemotherapy drips wrapped seductively round their arms like bracelets.
That image is crass for a reason. Anorexia and less common eating disorders are still, despite all we know and all the horror stories, not really regarded as diseases in the same way as cancer or malaria or measles. It’s as though there’s something silly and feminine about this decision not to eat, as though it’s frivolous and even, in this world of plenty, a special sort of spoilt.
This is possibly one of the reasons why fashion continues to get away with offering tired excuses for their worship of thinness: they say the clothes look better on thin women, but as Alexandra Shulman has pointed out, that’s because they’re made that way. It’s been argued that the very thin ‘photograph better’, but such an argument is obviously nonsense: we just aren’t used to seeing the normal wobbles of flesh many of us carry around with us reflected in the pages of a magazine – and, as the new Debenhams look book demonstrates, when we do, it can look just as beautiful. 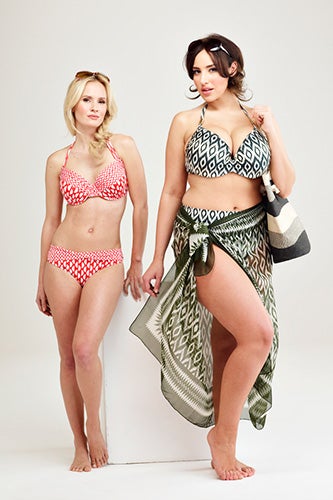 The Debenhams look book.
The problem is that, even as model scouting veers on the self-parodic, even as the ‘mainstream’ for models becomes more narrow, even as young women die from the illness that one industry refuses to take seriously, the old adage that ‘it’s just boundary pushing’ always lies just around the corner.
Fashion has a special sort of get-out clause in that respect, which is why it’s important to keep calling it out. Because a business model built around the idea of continually ‘being outrageous’ can get hideously bent out of shape in the wrong hands.
A report on fashion scouting in Jezebel once described it as ‘deliberately opaque’, which seems an appropriate summary. It’s the catwalk’s own ‘don’t ask, don’t tell’ policy: the truth remains the same, but nobody wants to talk about it lest everybody get their Damaris knickers in a twist.
But the act of not asking or telling is downright insidious: should this model be receiving artificial nutrition on a hospital ward, rather than artfully posing with a size zero T-shirt falling off her bony shoulders? Is she underage, even prepubescent? Is she being exploited? Will this uniformity of images, those that glorify the idea of a complete bodily lack of pinchable skin and relegate the actual norm to the shameful shadows, potentially harm the people who view them? Ssh. Turn a blind eye and take the money. These sorts of issues are for doctors or politicians or sociological researchers to tackle, not the fashion experts, never mind that they all too often happen to be the perpetrators.
The time has come to lay these problems at fashion’s door, because they must take their fair share of responsibility. Whoever inevitably passes the buck about what goes on outside the Stockholm Centre for Eating Disorders will demonstrate the industry’s unwillingness to ever involve themselves in anything beyond how a gypsy skirt hangs. But something has to change.
While there are myriad reasons why people develop mental illness, as well as a slew of pressures to stay slim, young and perky that don’t solely emanate from fashion photography, shirking all accountability is just plain cowardly. Scouting for anorexia may be a minority activity, but it’s representative of a wider malaise: one that has the potential to gnaw away at all of us every day – and one that, despite all of fashion’s protestations, could easily be fixed.