Denmark’s Golden Age was all the more gilded for the disasters from which it was born and the brutality with which it ended. The period covers roughly the years 1815-1850 – that is, from the end of the Napoleonic Wars to the middle of the First Schleswig War. The first upheavals saw Copenhagen devastated by bombardment from 126 British warships in 1807; state bankruptcy declared in 1813; and the fiefdom of Norway ceded to Sweden in 1814. Bookending events saw the dissolution of the absolute monarchy and the nation at war again.

In the years between, however, there was an extraordinary efflorescence of cultural talent. These were the decades of the fabulist Hans Christian Andersen, the philosopher Søren Kierkegaard, and the pioneer of electromagnetism Hans Christian Ørsted. There was an outbreak of art, too, notably with the sculptor Bertel Thorvaldsen and the painter Christoffer Wilhelm Eckersberg, who, as a teacher, made Copenhagen a centre of northern European art.

One of the most distinctive talents of the age, though, remains little known outside Denmark. Christen Købke was an artist who exemplified the undemonstrative, intimate prosperity of the Danish Golden Age; indeed, his own life – 1810-1848 (he died at 37 of pneumonia) – fits its span with seemingly predestined neatness. And the world of his pictures is a tidy one too: Købke’s work consists almost entirely of paintings of Copenhagen and its environs, small portraits of friends and family, and Italian scenes made when he left Denmark in 1838 for the first and only time in his life. He was, though, a painter with perfect pitch.

Købke, one of 11 children, lived for 18 years in the Citadel, a fortified military encampment on the edge of Copenhagen. His father was a baker for the military there, and its towers, gateways and bridges were to become one of the staples of his art. At the age of 11 he was struck down by a bout of rheumatic fever, and, bedbound, started to draw. On his recovery he was admitted to the Royal Danish Academy, where he was later taught by Eckersberg and absorbed his mantras: “Paint whatever you wish” and approach the ideal through the real. 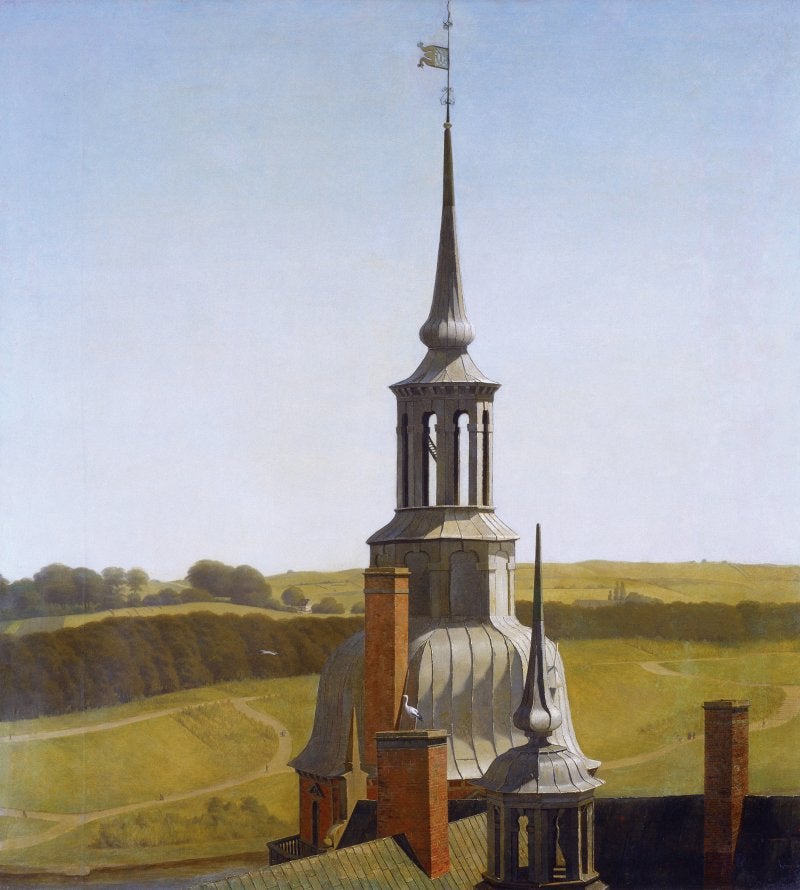 Købke’s early years coincided with the high point of European Romanticism and there is something quietly determined about the way he ignored it. Look at his paintings and it is hard to believe that a great tranche of art was given over to explorations of the subconscious, renderings of emotionally fraught literature, sturm und drang, wild nature and death. Perhaps this was because, as his first biographer claimed, Købke “was born without any creative imagination” and that “he was empty and barren as soon as he closed his eyes”. So he painted only – and exactly – what he could see. A quiet spirit, Købke wrote that “The Lord is strong in the weak” – and he felt himself to be weak. So unquesting was he that he never painted anywhere that was too far for him to return home in time for dinner. This should make him a dull painter, but in fact his pictures are poignant and poetic – renditions of scenes that breathe calm but also show a heightened realism and intense and precise observation. And in two paintings at least he was as radical as any painter anywhere in Europe.

In 1834-35 he painted a pair of monumental canvases for his parents. They carry the most prosaic of titles, One of the Small Towers on Frederiksborg Castle (Designmuseum, Copenhagen) and Roof Ridge of Frederiksborg Castle with View of Lake, Town and Forest (SMK, Copenhagen), and show the view, or rather carefully selected sections of it, from the roof of a royal palace some 35 kilometres north of Copenhagen. The scale – each is more than a metre and a half square – was usually reserved for history or biblical paintings but Købke gave it instead to scenes that barely have a subject or a focal point.

We have become accustomed through photography to the sort of cropping practised by Købke, which rather obscures just how avant-garde his views are. They are based on strong geometrical horizontals and verticals, but while almost miniaturist in their detail – the light catching the ridges where the roof leads meet, the individuality of chimney bricks – they also approach the abstract. Fully two-thirds of one shows nothing more than empty sky, though that, too, as is every inch of the paintings, is rendered with the same degree of attention.

It is tempting to look for symbolism in the paintings: what do the pair of storks signify? Do the ogee domes and spires represent pride in Denmark’s past and its resurgence? But Købke was not given to flights of fancy or metaphors. These scenes, bathed in crystalline sunlight, show a real, attractive but unspectacular landscape and a well-ordered world of stillness. This careful pleasantness is, however, transfigured: the pictures make for the gentlest of idylls and yet are wholly satisfying – they are a sigh of contentment. In this bourgeois Eden all was well, for Købke and for Denmark, and that was enough.