Egon Schiele (1890-1918) was something of a child prodigy – when he enrolled at Vienna’s foremost art school in 1906 he was the youngest student in his year – and having people constantly tell him how talented he was left its mark. At one point, he wrote to his mother reminding her that she should be grateful for having given birth to such a genius, and when he reported that local children, seeing him in a kaftan, called him “Lord God Painter”, his pleasure at their perceptiveness is palpable.

Nevertheless, even Schiele had enough residual humility to realise he had much to learn from Vienna’s presiding deity, Gustav Klimt. He not only borrowed the idea of the kaftan from Klimt – who used to wear one while working, with nothing underneath (which partly accounts for the rumour that he slept with every woman he painted) – but, more importantly, how to turn mere drawings into highly charged works of art. 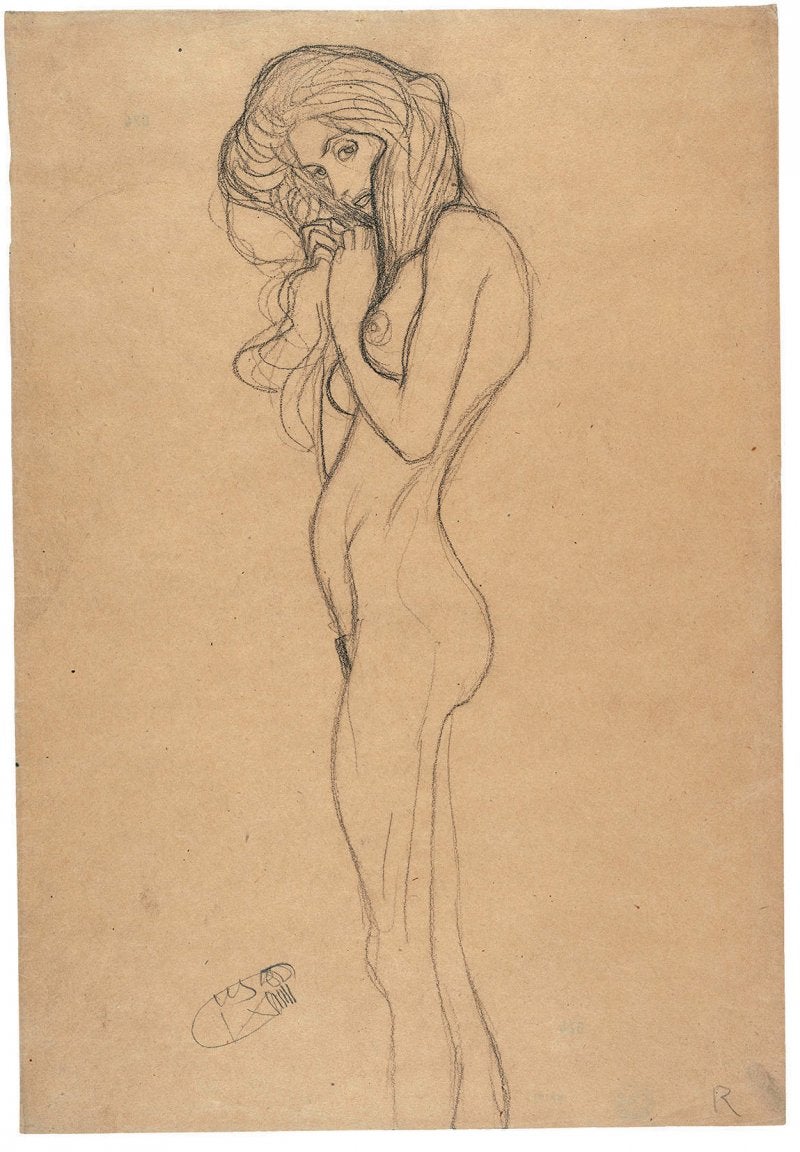 By the time Schiele arrived in Vienna, Klimt (1862-1918), 28 years his senior, was not only an established artist but a feted and notorious one, too. He had both founded the Secession – the hugely influential anti-academic design movement that sought to fuse art and life – and been awarded the imperial Golden Cross of Merit for his decorations for the grandiose Burgtheater, but he had also tasted official disapproval when the nudes he included in a series of paintings for Vienna University caused outrage. He licked his wounds by charging the city’s society women vast sums to paint their portraits and immortalise them as golden icons.

Although it was Klimt’s paintings that first impressed Schiele, especially a solo show in 1908, the two men didn’t meet until the following year when they established a strong rapport and exchanged drawings. The role of drawings occupied a different place in the art of each man. The majority of Klimt’s were composed with paintings in mind but he also made private works, often quickly executed, that deviated from the ideal of heady beauty that permeated his paintings. Sketches of his elderly mother or a nude pregnant woman past the first flush of youth shed stylisation for an unflinching intimacy. Sometimes he didn’t bother with limbs, while figures fill the sheet like columns, cropped at the head and feet. Schiele, though, took it all in.

The closeness of the two men lasted until death. Both died in 1918, Klimt at the beginning of the year from pneumonia following a stroke, Schiele at the end of the year, three days after the death of his wife Edith, then six months pregnant, both victims of the global flu pandemic. When Klimt died, Schiele made three drawings of him lying in the morgue, but no one was there to perform the same service for him. 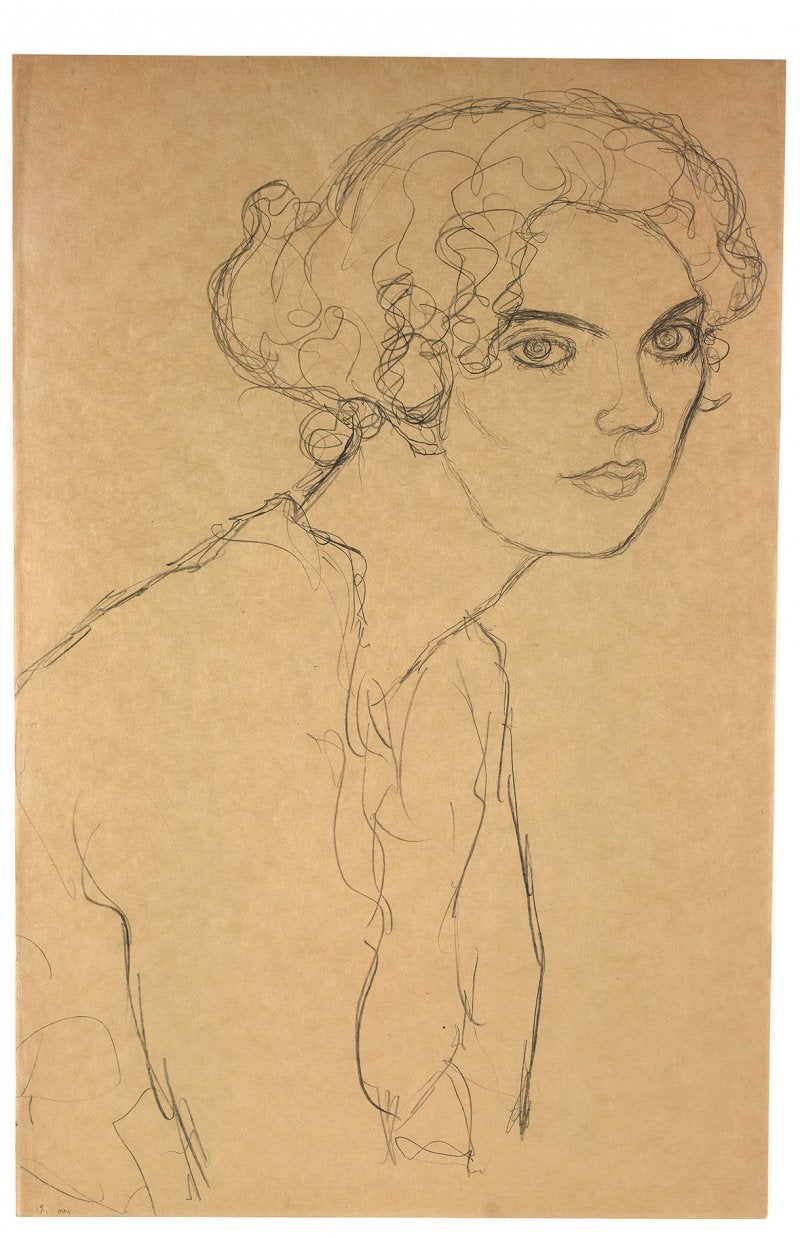 To mark the centenary of their deaths, the Royal Academy is holding an exhibition of 100 of their drawings from the Albertina Museum in Vienna. There is something of a fad at the moment for paired exhibitions and not all work; this one, however, does because of the importance of both artists and their closeness.

It is an exhibition of the highest quality. What emerges from it, though, is that while Klimt may have been the greater painter of the two his drawings, even for so superlative a draughtsman, appear positively lightweight alongside those of the younger man. What Schiele wrote to his mother was right: his 2,900 extant works on paper show him to have been one of the greatest draughtsmen in the history of art.

It is a curious experience to see such a stellar artist as Klimt so comprehensively overpowered. His drawings are literally paler (Schiele used a darker pencil or crayon) and even when the two men treat the same subject there is only one winner. There are, for example, two Klimt drawings in the exhibition showing women masturbating; they are eye-openingly frank but on the opposite wall are two Schiele drawings of a headless, nude female torso – one with her slip pulled up, the other with the underclothes down to show her genitals. They are nowhere near as explicit as the Klimt drawings yet somehow they manage to make those images look almost genteel.

The comparison, though, highlights the great difference between the two artists’ drawings: Klimt’s tend to be observations, Schiele’s are confrontations. In any number of sheets, Schiele’s models stare back at you in a mute who-will-blink-first challenge. It can make his pictures unnerving and deeply uncomfortable. Yet such is his brilliance that he can outstare you with pudenda.

Both men were aware of Freud’s “Three Essays on the Theory of Sexuality”, published in their city in 1905, and were unashamedly interested in the topic. Much of Klimt’s work in the last decade of his life concentrated on women, sometimes as archetypes, sometimes as femmes fatales, usually as portrait sitters but always with an erotic undercurrent. He happily admitted that women fascinated him and that sex was life’s greatest pleasure, as the fact that he had 14 children – of whom he acknowledged only four – attested. There is, however, often something impersonal about the drawings, as if it were the woman rather than the person who interested him. In drawing after drawing, the woman’s face is left sketchy while her rippling pose and the near abstract details of her dress absorb his attention. 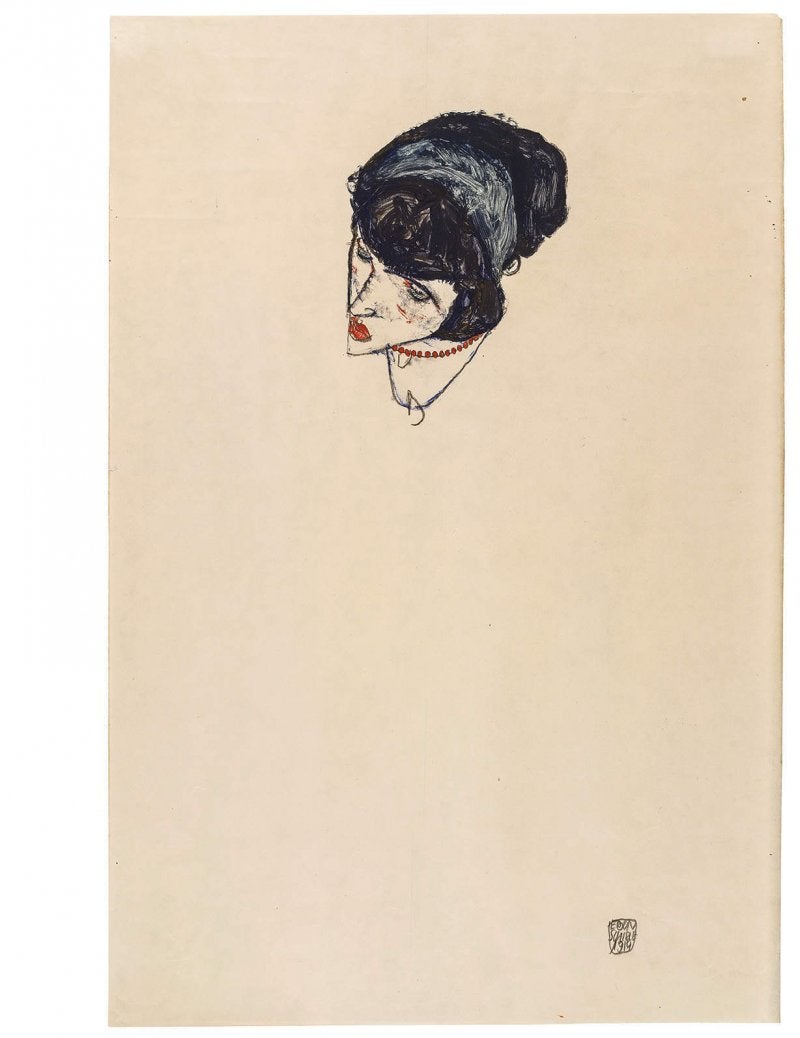 With Schiele on the other hand it is all about particularity, whether that be flowers (as in his three studies of chrysanthemums), buildings (the upper storeys of a house in Krumau), landscapes (the Carinthian countryside), people or things. Among the most disturbing works in the exhibition are a series of pencil and watercolour drawings of chairs that instantly bring Van Gogh to mind. They too were painted at a time of great stress in the artist’s life. In 1912, when Schiele and his model-lover Wally Neuzil (they were introduced by Klimt) were living in a village outside Vienna, they gave refuge to a 13-year-old girl who had run away from home. The girl’s outraged father called the police and Schiele was arrested on charges of child abduction and seduction and spent three weeks in prison.

The chair paintings are therefore pictures of the furniture in his cell, and it is not too fanciful perhaps to read into them his fear as he faced a prison stretch that could have been 20 years. Indeed there is an agonised watercolour self-portrait painted at the same time in which he shows himself wrapped in a grey prison blanket, clawing at the air and with a face contorted in agony, entitled For Art and For My Loved Ones I will Gladly Endure to The End. As it happens, the end was not as bad as he feared; he was found guilty only of “public immorality” for having let a minor see the nude drawings in his studio. The judge showed what he thought of the pictures by burning one in court.

In the exhibition, on the wall opposite, is a watercolour that shows just why Schiele was thought to be so degenerate. It depicts a girl in her early teens (he would often use street children and prostitutes as models, and they could be one and the same thing) and despite her proto breasts and pubic hair she is clearly very young indeed. The age of consent at the time was 14 but Schiele was nevertheless pushing the limits of propriety. “What gives me the most satisfaction, the human body,” he said, but he could hardly argue that this wasn’t a picture specifically about sex, since he picks out her lips, nipples and labia with a vivid pink, or indeed about death since he gives her flesh a disturbing grey tint as if putrefaction were already underway. 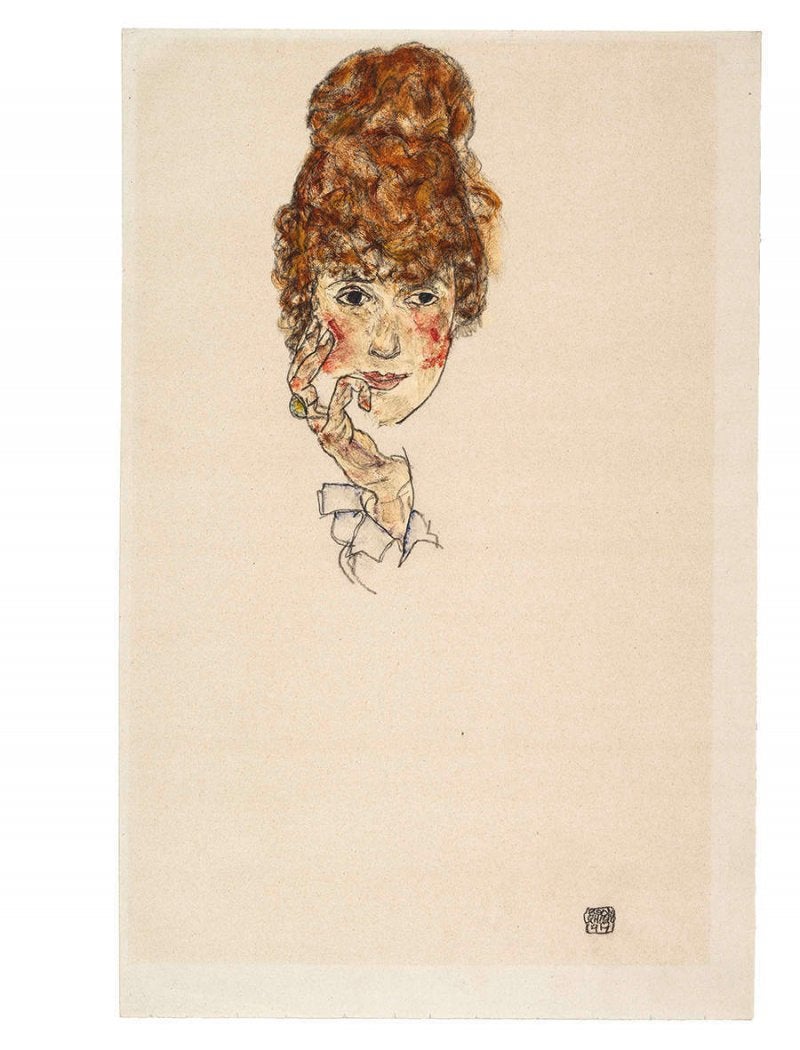 In 1901, Klimt too drew a young naked girl as part of his preparations for his celebrated Beethoven Frieze, but they have an elegance of form and delicacy of line that suggests the artist’s interest was, healthily, at one remove. Where Klimt is often sensuous, as in a lovely 1901 drawing of a pair of lovers embracing, Schiele can be bleak. There are no curves to his nudes and not an ounce of fat is to be seen: his was a vision of sex as gristle.

But then, Schiele reminds you again of what he could do and the disquiet turns to wonderment. In 1912, for example, he made a pencil and watercolour drawing of a blonde woman. She is naked except for stockings, a string of beads and a comb in her hair. She is also a challenge Schiele set himself. He chose the hardest pose he could envisage, looking down on her from just behind her left shoulder, to see if he could depict the fiendishly difficult foreshortened transitions of neck to shoulder to breasts to stomach to thigh. And of course he could, with an ease and assuredness few other artists could match. The more you look at it, the more this sort of skill seems preternatural.

By 1918 Viennese society seems to have come round to Schiele and begun to see him as Klimt’s heir, the sheer oddity of his drawings – all those truncated limbs, spatulate fingers and drilling gazes – notwithstanding. In the last working year of his life he had 177 sittings with models and was determined to win the commissions that came so easily to the blithe Klimt. It is one of art’s great losses that his development was cut short at 28: the art he left is a young man’s.

This article appears in the 07 Nov 2018 issue of the New Statesman, Revenge of the nation state