About suffering they were never wrong,/The Old Masters,” wrote WH Auden in his poem “Musée des Beaux Arts”. Few though were as consistently right as the Spanish baroque painter Jusepe de Ribera. While a large part of his output featured contemplative saints and penitent Magdalenes, pain was his forte. It was another poet, Lord Byron, who skewered his gory reputation: “Spagnoletto [the little Spaniard] tainted/His brush with all the blood of all the sainted.”

Because he so frequently depicted the infliction of pain Ribera (1591–1652) was traditionally thought to be a violent man himself, but nothing in the scanty facts available about his life supports this. He was born near Valencia and moved to Italy at 16 to study painting. He is documented as being in Rome by 1612: it was there he saw the still-fresh work of Caravaggio, who had just died (in 1610), and absorbed both its earthy realism and its dramatic lighting to become perhaps the most accomplished of the Caravaggisti. When in 1616, he arrived in the Spanish fiefdom of Naples, where he was to spend the rest of his working life, he found himself in the second largest city in Europe. Even by the standards of the age, it was a place with a reputation for everyday brutality – from its dagger-happy port streets to public torturing and executions.

Ribera was, though, no mere follower of Caravaggio; he was a great painter, draughtsman and printmaker in his own right and allied an immaculate technique to a distinctive Counter-Reformation sensibility. Nor was he alone in depicting violence: the early 17th-century was a particularly gory time and Rembrandt, Rubens, Caravaggio, Salvator Rosa, Jacques Callot, Artemisia Gentileschi and even the stately classicist Poussin were just a few of the painters who took pain as a theme. It was only Ribera though, whose Spanish birth and clientele gave him a special affinity with the mortification of the flesh, who made it a speciality. 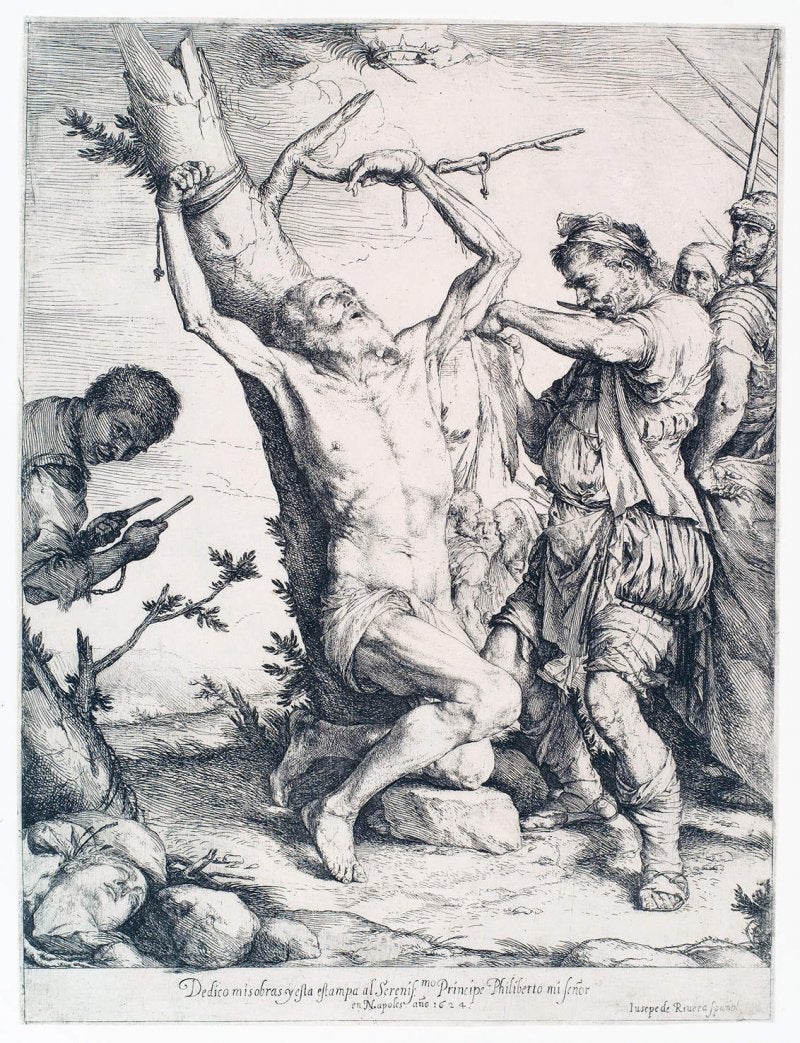 The Martyrdom of Saint Bartholomew (1624)

“Ribera: Art of Violence” at Dulwich Picture Gallery is, remarkably, the first British exhibition dedicated to him. The sheer quality of the works on show makes this neglect all the more extraordinary. Nevertheless, it is a show that tests the stomach: a catalogue of flayings, piercings, hangings and torturings. The 40 works are set around three major paintings – two showing the fate of St Bartholomew (a theme Ribera returned to again and again), condemned to flaying and beheading for converting the king of Armenia’s brother to Christianity, and Apollo and Marsyas (1637), from the Capodimonte Museum in Naples. It depicts the punishment of the satyr Marsyas, who challenged the god Apollo to a musical contest and, through divine duplicity, lost and was skinned alive for his hubris.

The pictures are linked not just by the pagan scene being a prefiguration of the Christian one but in the way they go beyond mere sensationalism. Beneath the visceral thrill lies the idea of the paragone, the Renaissance debate about which of the arts could claim primacy. When Ribera painted Marsyas’s mouth open in an agonised howl he was showing that painting could also express sound, while the marmoreal body of Apollo is offered as proof that sculpture was not the only way to be sculptural.

Here, too, is a variety of expression and a series of contrasts beyond the other arts: Marsyas’s fellow satyrs raking their cheeks as they hear his cries; the livid red wound as Apollo starts to peel away his victim’s skin – obscenely bright against the tree trunk; the god’s expression of mild curiosity as he goes about his grisly business is the chilling opposite of the creased-browed wail of Marsayas himself who makes unnerving eye contact with the viewer (the painting was probably hung so that his open mouth was at eye level, offering an abyss of pain). 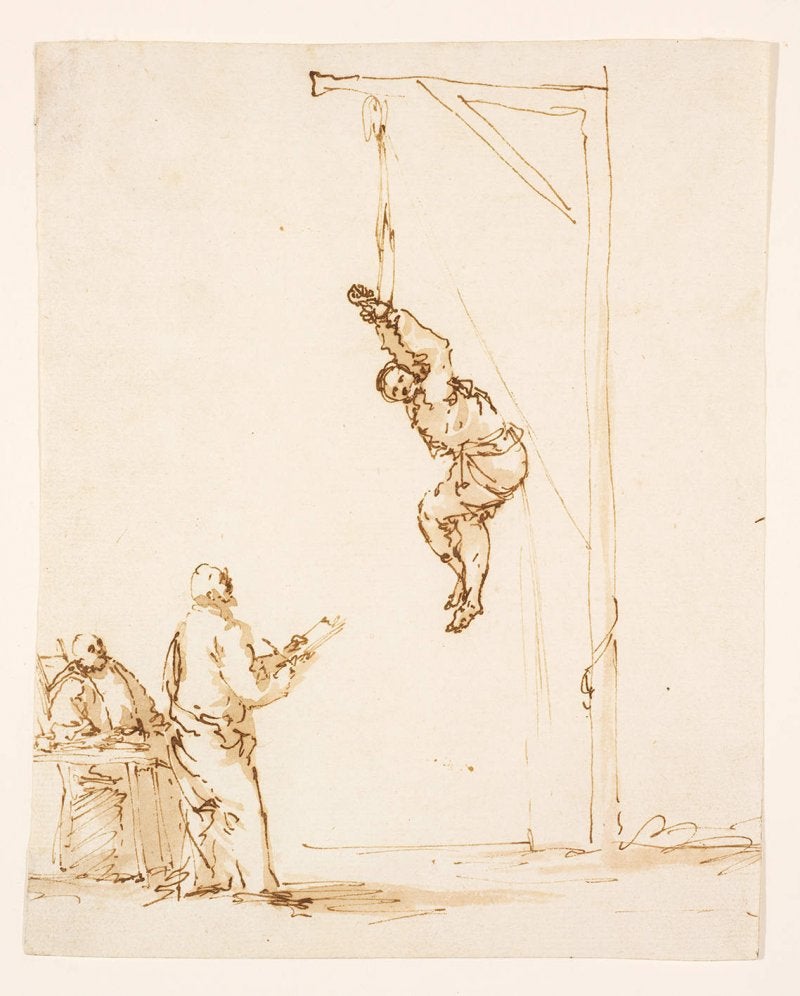 As Ribera airs ideas about skin and canvas, realism and idealism, life and death, there is beauty too in the billowing of Apollo’s cloak, in the near circle shaped by the central pair, and in the musical instruments of the contestants even as Apollo plays Marsyas as he played his lyre. All these intellectual concerns are contained in one of the most distressing paintings in art.

It is a painting that is also a culmination. Some 160 drawings by Ribera survive and fully a quarter depict men tied to trees. There are others showing the strappado, a form of official torture in which the victim was suspended by his wrists, which were tied behind his back, dislocating both shoulders as he dangled. There are images of Saint Sebastian bound and pierced by arrows, of St Peter crucified upside down, and of a man garrotted at the stake. What gives these horrors added potency is the sheer beauty and finesse with which they are depicted.

It may be of course that Ribera was merely relishing all this pain, but more likely is that he was acting as a witness. He was a painter of the senses and the senses are never more alive than when in extremis. Like a method actor living a role the better to act it, Ribera got as close to pain as he could so that it doesn’t just shout from his paintings, but screams.

This article appears in the 03 Oct 2018 issue of the New Statesman, The fury of the Far Right