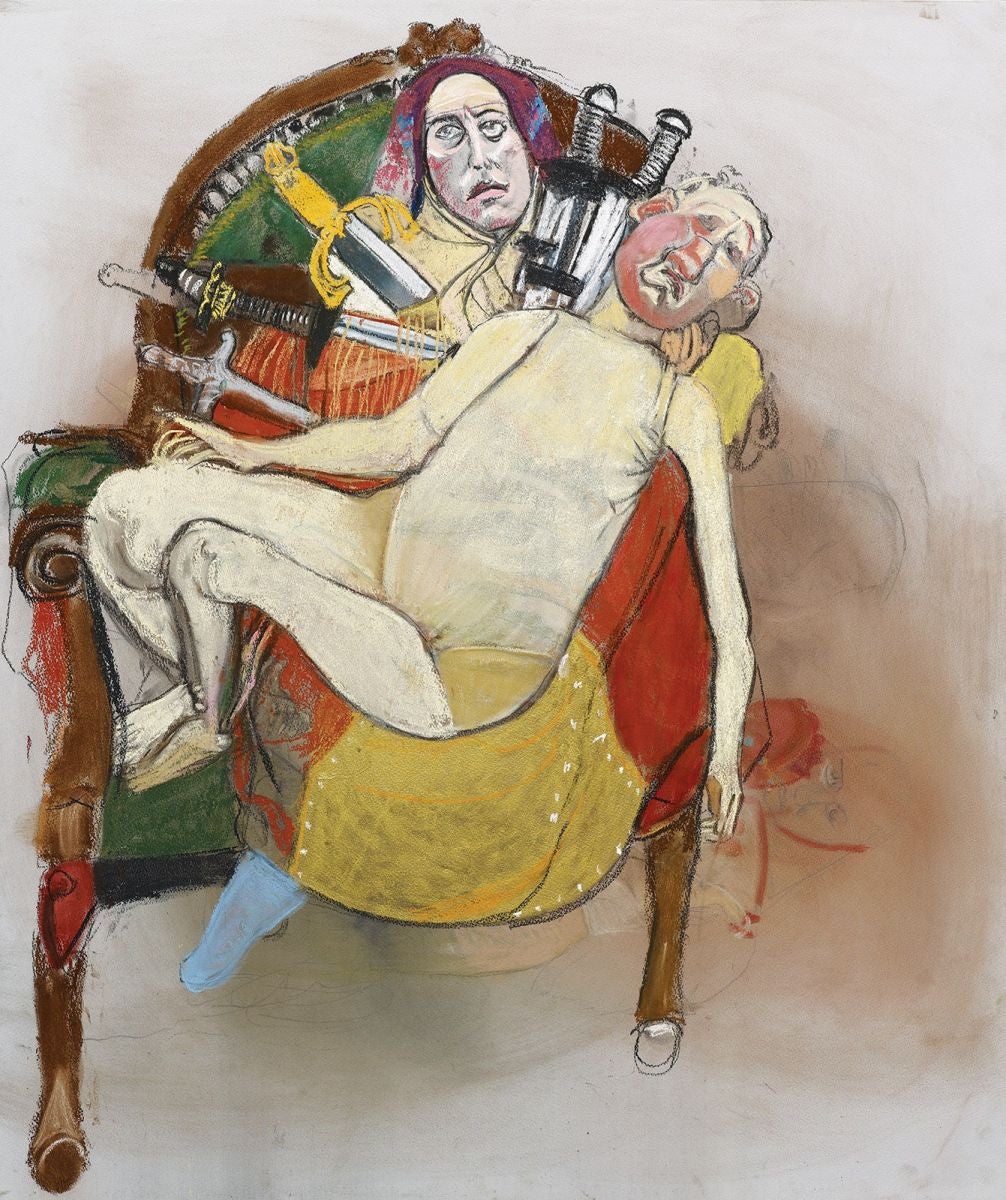 Not all artists are good at explaining their work but Paula Rego knows just what her pictures are about: they deal, she says, with “the beautiful grotesque”. It is a neat encapsulation of psychologically complex works that illustrate nursery rhymes, fairy tales and the folk stories of her native Portugal, that show women as dogs or sexual avengers and that reimagine classic novels such as Jane Eyre and The Metamorphosis.

Rego’s pictures (predominantly in pastels; she abandoned painting in the mid-1990s) contain real people and an assortment of mannequins – strange creatures made from pillows, stuffed tights and old clothes – as well as plaster saints, plastic Virgins and toy animals dressed like dolls. This cast of artist’s extras lives in her studio and, along with a couple of favourite models, is pressed into service again and again to people her pictorial stories. The results are indeed beautiful but they are never less than strange and frequently deeply sinister.

Her mises en scène are sealed and the viewer is never invited to step beyond the picture plane. Whatever dark play unfolds in them – and it is rarely clear exactly what that might be – is between her mute figures alone. Unsurprisingly, perhaps, Rego is afraid of the dark. “Fear is something you have all the time,” she has said, and her work is meant to “give terror a face”. In this, she conjures up her Iberian predecessor Goya and especially his Caprichos prints.

The latest emanations of Rego’s unsettling imagination are three new sets of pictures on show at the Marlborough Fine Art gallery in London. The first series illustrates the Portuguese novelist José Maria de Eça de Queiroz’s 1887 comic novel The Relic, in which a priapic nephew comes a cropper in attempting to inherit his devout aunt’s fortune. The second, The Last King of Portugal, shows scenes from the life of Manuel II who, with the republican coup of 1910, left his country for exile in England. The last, Stone Soup, is a set of pen-and-watercolour drawings that illustrate a folk tale in which a starving girl tricks hard-hearted villagers into giving her fresh ingredients to supplement the rock she is boiling for broth.

In The Relic, the nephew Teodorico travels to Alexandria to bring back the crown of thorns to give to his pious aunt. Unwittingly he gives her instead the negligee worn by a prostitute he has fallen in love with while away and is promptly disinherited. Rego’s version is a reimagination: she shows Teodorico meeting the prostitute Adelia, a large woman with an uncanny resemblance to a lounging Queen Victoria, and resting his head tenderly on her plump arm. When he reaches the Holy Land, it is a place of angels with hooped earrings, a tall man in a burnous and a distended dead donkey with a human phallus – a reflection, perhaps, of his libido. When he gives his aunt the wrong gift, the setting is a spaghetti-western-style emptiness in which the disgraced nephew, clutching his lover’s negligee to his chest in an echo of Adam’s shame at his nakedness in Genesis, has no place to hide. The most striking work of all is Our Lady of Sorrows: the Virgin sits in an armchair, pierced by swords and holding a mannequin figure in her lap that should, traditionally, be Jesus but who here has Cabbage Patch Kids features.

The same subversion is at work with the historical reality of Manuel II. The adult king is cradled on his mother’s lap as he suckles her breasts. He flees Portugal dressed as a peasant and rowing a rubber dinghy away from the cliffs of Ericeira, where Rego spent her childhood. At his marriage, the bishop wears a beaked mask and the bridesmaids are a selection of malign sprites. While you may be denied the key to unlock this phantasmagoria, the pictures are all the more engrossing for that. The viewer, like a child playing with dolls, can’t help but make up innumerable tales of one’s own to make sense of what is going on.

What the potency of Rego’s subject matter tends to obscure is her craft. The surfaces of the pictures are as rich and complex as the scenes. She uses pastel in both light scourings and patches of heavy impasto, tightening and loosening with pressure and overlays of colour. She nods to painting’s past, too: a ghostly Velázquez from Las Meninas stands behind Manuel and his mother, while the king’s deathbed scene, with its mirrors, heavy curtains and fascinated maid, is part Rokeby Venus and part Caravaggio’s Judith Beheading Holofernes.

These pictures do not make comfortable viewing. But like all proper art, while they may evade understanding, they exert a pull that makes you look over and over again.