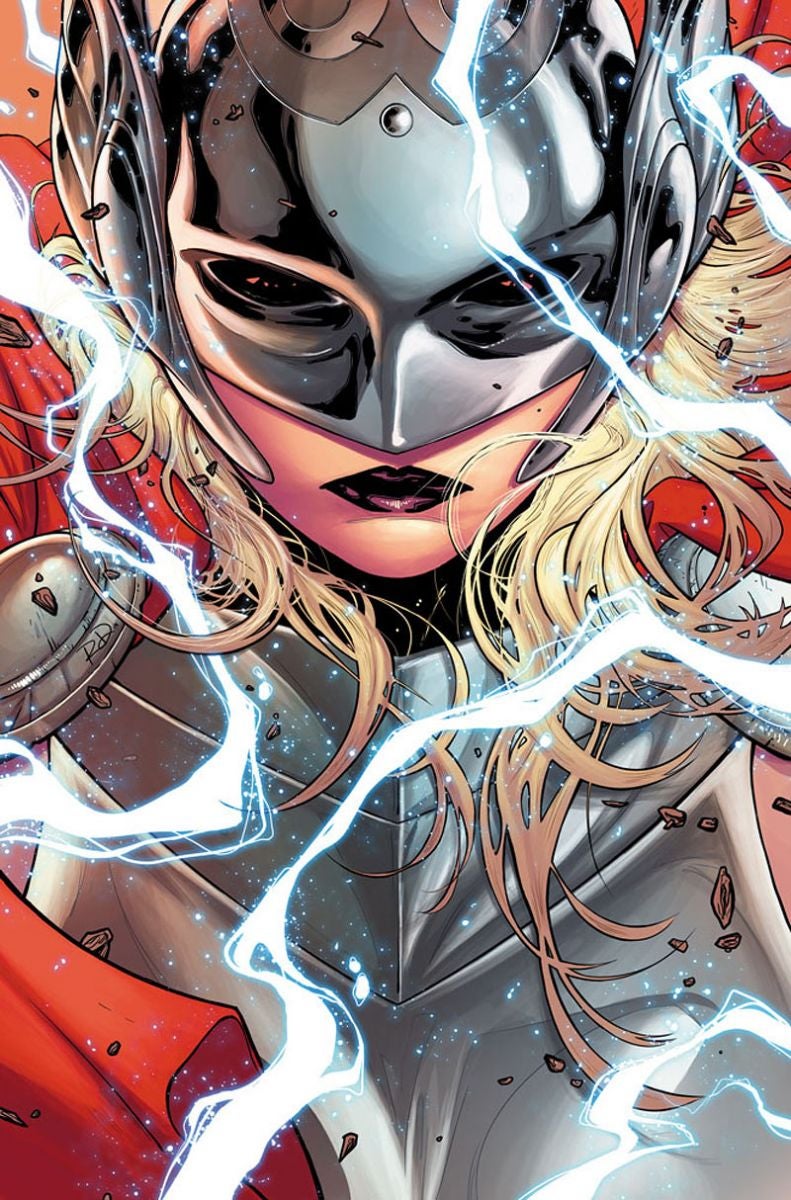 Welcome to superhero world, where the most vocal fans are constantly outraged about the same things happening over and over again. Yesterday The View, an American daytime talk show, announced that that an upcoming Marvel comic will star Thor, as a woman.

“It’s a huge day in the Marvel Universe,” announced Whoopi Goldberg. “Thor, the God of Thunder, he messed up. He is no longer worthy to hold that damn hammer of his. And for the first time in history that hammer is being held by a woman.”

Which isn’t entirely true – back in the ‘70s a “What If?” comic showed Jane Foster as the earthly version of Thor, in all her feminine glory as Thordis. And Wonder Woman is among the large crowd of people who have previously wielded Mjolnir. But as writer Jason Aaron emphasised about October’s Thor #1, “This is not She-Thor. This is not Lady Thor. This is not Thorita. This is THOR. This is the THOR of the Marvel Universe. But it’s unlike any Thor we’ve ever seen before.”

The reaction to the news was immediate, the story spreading like wildfire across not only comic news sites but with the mainstream press pouncing as well. It isn’t everyday that a new comic is revealed on daytime television, not least for a superhero character that just two movies ago was mostly unknown by the general population.

Character switcheroos are common in superhero comics, with Spider-Man recently putting Doc Ock behind the face of Peter Parker, Loki becoming a child before reverting back to adulthood, and Batman’s cowl being worn by, well, just about all of Gotham. A character switch is not exactly news then, so why the kerfuffle?

Here we have the character of Thor being changed not to a different male character, but to an unknown female character. And thus, much like when Miles Morales, a black Hispanic teen, became Ultimate Spider-Man, or when Alan Scott was reimagined as a Green Lantern who happened to be gay, there are cries of “PC gone mad” and “publicity stunt” aplenty from a vocal segment of fandom.

Superhero comics are ultimately tied to a never-ending cycle: no matter what changes are made by writers, those changes almost never stick as characters are reset to their original status as heroes, villains, or background scenery. Creators can have great fun playing in the superhero sandbox but when it’s time to move on, all the toys have to be put back where they were found, all in time for the latest round of merchandise or cinematic releases.

And yet it’s what happens in those changes that drives people to keep reading their otherwise nostalgic titles – the ingenuity that can be found by each new generation of writers and artists is the spark that results in the genre still producing genuinely great works.

Only lately, and in increasing numbers, those changes are different than before. The cinema, the comic cons, the comic shops, and the fan communities are filled with women who are asking for titles more than ever before. With everyone asking for more titles. People who aren’t just white, straight, and male. Just like the real world!

And all those people have money. An expanding audience who pick up the comic trade collections and turn out in cosplay of their favourite characters. Just days after a new, funkier Batgirl was announced the fans were sharing their new drawings with excitement and hope. Just one day after the new Thor was announced, Tumblr and Twitter and Facebook are full of excited fans (and creators!) looking forward to the new title and wondering what the story will be.

After all, in the 1980s Thor was replaced by an alien space horse and temporarily turned into Frog Thor. Can a woman really be more fantastical than that? Thor’s brother, Loki, has indeed been his sister many times now so whether Thor is hit by some gender-bending persona-splitting lightning, or is banished (again) from Asgard, or goes into witness protection, the Asgardians themselves will be terribly unsurprised.

The ladies of The View though were very excited, as was the whooping audience. “Where did she get her bra from?!” joked Sherri Shepherd, as Goldberg pointed out that this Thor was actually in better proportion than a lot of female superheroes. “She’s got some guns!” co-host Jenny McCarthy added.

The new Thor is indeed a strong looking woman, which doesn’t entirely detract from the boob armour, but it will be interesting to see how her outfit and portrayal plays out.

“The inscription on Thor’s hammer reads ‘Whosoever holds this hammer, if HE be worthy, shall possess the power of Thor.’ Well it’s time to update that inscription,” stated Marvel editor Wil Moss. “The new Thor continues Marvel’s proud tradition of strong female characters like Captain Marvel, Storm, Black Widow and more. And this new Thor isn’t a temporary female substitute – she’s now the one and only Thor, and she is worthy!”

It’s not a brand new character as such, those are incredibly rare in an industry filled with septuagenarian heroes, but it does show that Marvel are looking outside that usual default box when it comes to character changes. And when considered alongside a multitude of female led titles from the publisher – Black Widow, Captain Marvel, Elektra, Ms Marvel, She-Hulk, and Storm – it’s hard to be too snooty about temporarily changing Thor in this manner.

Temporarily yes because permanent in superhero comics really means “until we change it again”. But if we’re lucky, new Thor will be fabulous and popular, receiving her own ongoing title at the end of it. And maybe she won’t get stuck with a name like Thordis.

Of course as any comic reader will tell you, Thor is a name rather than a title. But so is Bruce Wayne and he hasn’t always been, well, Bruce Wayne. This is superhero comics, where anything can happen and usually has happened before.

But this time it was announced by Whoopi Goldberg. That’s one change that is definitely brand new.

Thor #1 is out in October, written by Jason Aaron with Russell Dauterman on art duties.