On 1 September, Hurricane Dorian struck the Abaco Islands in the Bahamas as a brutal category 5 storm – tied with the 1935 Labor Day hurricane for the title of the most powerful Atlantic storm at point of landfall, with wind-speeds of 185mph and gusts as strong as 220mph.

In what meteorologists described as a “nightmare scenario,” the storm stalled over the Abaco islands and Grand Bahama, pounding the islands relentlessly for three days. The official death toll stands at 50, though as with previous storms, such as Hurricane Maria in 2017, that number is expected to rise considerably.

Rescue work agencies and NGOs are now beginning the Herculean task of sorting through the rubble and attempting to provide food, shelter and medical care to survivors. One of these is Team Rubicon UK, an organisation which marshals predominantly ex-military volunteers to put the skills they learned in combat environments to work in areas struck by natural disasters like Hurricane Dorian. (There is also an American sister-organisation, Team Rubicon US.)

I speak with Paul Taylor, a 26-year infantry veteran, who currently serves as Team Rubicon UK’s operations response manager, and his second-in-command, Lizzy Stileman, a 20-year veteran of the Royal Logistics Corps. They both arrived in Nassau, the capital of the Bahamas, on September 4, and arrived at what had been the luxury resort of Treasure Cay on Great Abaco three days later. 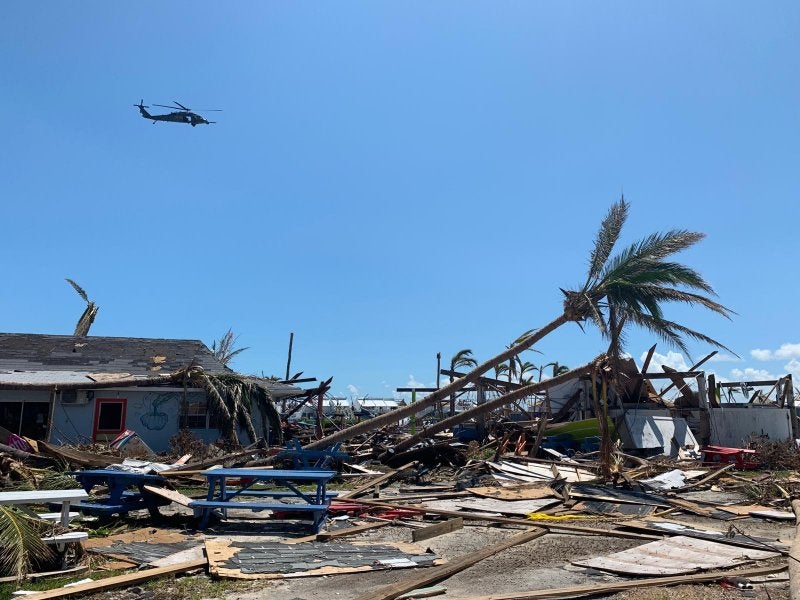 What they found, Taylor says, was “absolute devastation … post-apocalyptic.” Both veterans of the aftermath of many such disasters through Team Rubicon, they agree that what they are seeing on Abaco ranks among the worst they’ve ever witnessed. “The place has been absolutely flattened,” Taylor says. “You’ve got boats turned upside down … some of them lying on top of buildings. A lot of the buildings on the coast are just rubble. The landscape, which is normally palm trees, [is] just completely flattened.”

“We’ve just driven through Marsh Harbour and there’s hardly a house standing,” Stileman adds. “We were trying to find the centre of town looking on the maps, and there’s just nothing – you’ve got no bearings. There’s just rubble everywhere, corrugated iron flapping in the wind, cars upside down, boats in the middle of parking lots upside down. It’s just monumental.” 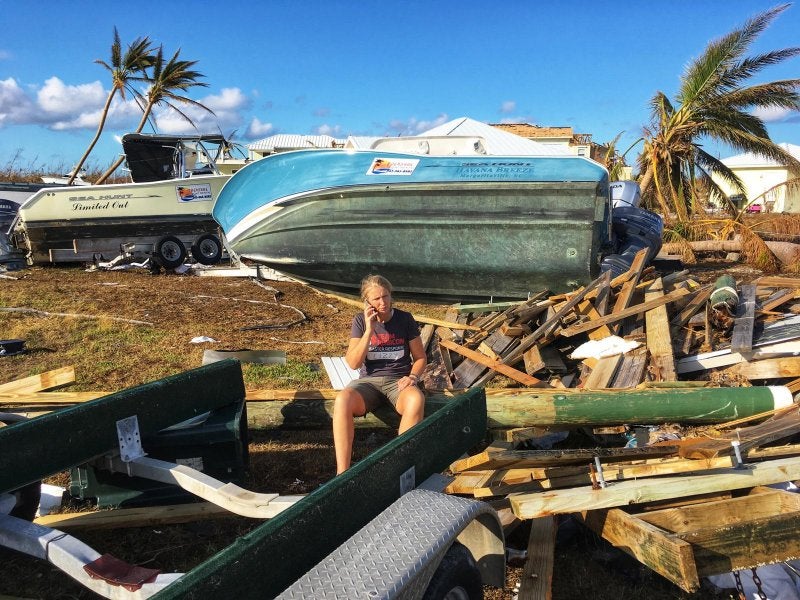 The official death toll in the Bahamas from Hurricane Dorian stands at 50, 42 of which are on Abaco, but government officials have said that 1,300 people are currently unaccounted for across the Bahamas. “You can join the dots with that, can’t you,” Taylor says. “If they’re still missing at this stage then I guess they’re missing, presumed dead.”

There are also logistical problems unique to the Bahamas. The islands are a popular tourist destination, with luxury resorts such as those that had been on Treasure Cay. Then there are the areas where the workers at those resorts lived; in this case, many of them are Haitian immigrants, and the luxury resorts abut shanty-towns such as in one part of Abaco known as The Mud. These are the places which have been worst-affected.

Debris has now largely been cleared from the main road linking the island’s largest town, Marsh Harbour, with Treasure Cay. But many of the tracks linking the road with smaller communities are still blocked by debris and fallen trees; chainsaw teams are now working on clearing them. 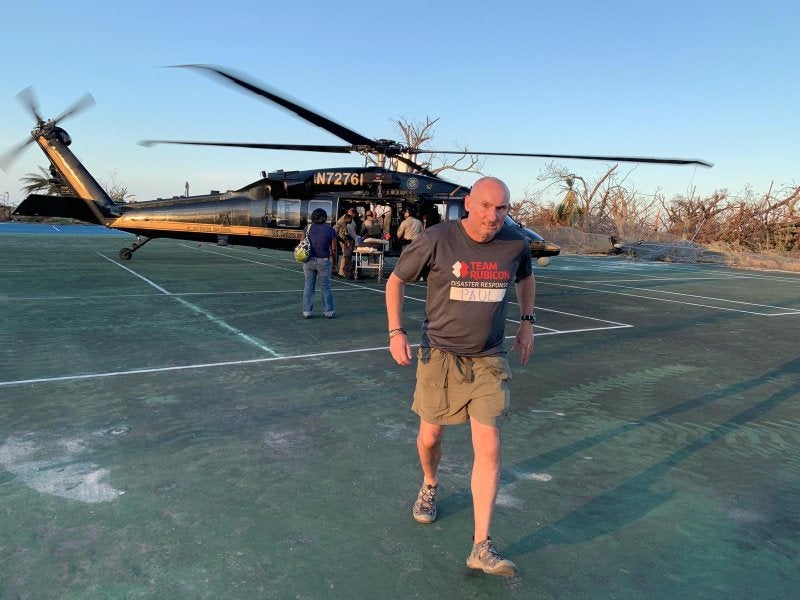 Compared with the last disaster Taylor was at with Team Rubicon – Cyclone Idai, which slammed Mozambique in March – he says that one of the problems on Abaco is coordination across relief efforts. After Idai, all aid came through one point of entry: the airport. On Abaco, however, aid from well-meaning individuals and organisations is coming in piecemeal, via private plane or by boat from the US mainland. Team Rubicon is working with UN agencies and the Bahamaian government to help try to coordinate the effort so the supplies can reach where they are most needed.

One common problem in the aftermath of a hurricane like this is the spread of diseases like cholera. Not only is there an urgent need for hygiene kits and water purification equipment across the island, but also public education and advocacy needs to be widely spread so that survivors are educated on how to avoid disease. 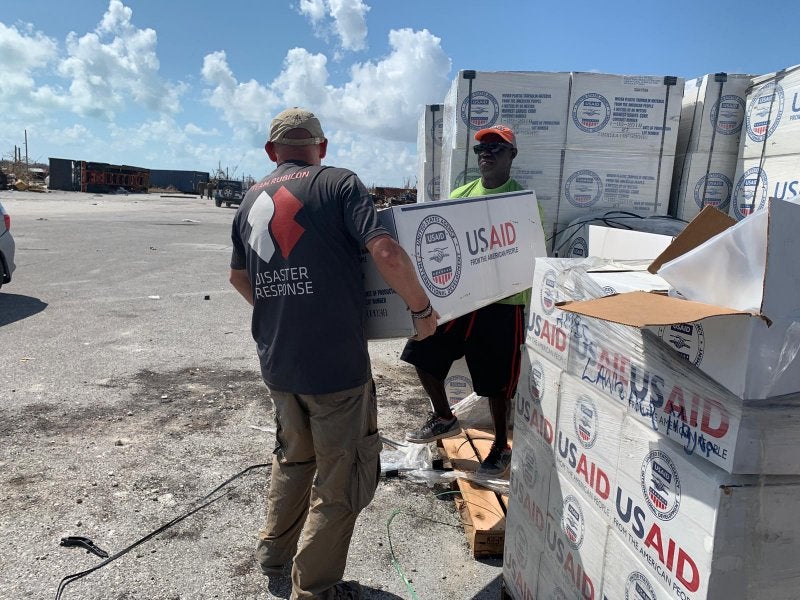 Food, once provided, also needs to be cooked; some charities, such as World Central Kitchen, run by the celebrity chef José Andrés, have cooked and distributed more than 100,000 hot meals in the Bahamas already. But longer-term solutions, such as provision of small gas burners, are also needed. And, as with disease prevention, there is a communication problem; telecoms has been unavailable across Abaco and the way to some smaller communities is still blocked.

“Letting people know where exactly to go and where they can get aid and where the NGOs will congregate and provide help, that message doesn’t always get out to everyone,” Stileman says. “There are certainly some communities that will not have got that message about that assistance, and that’s what Team Rubicon is very, very good at – we will go out and search those communities and do the last-mile logistics and take that aid in to them. 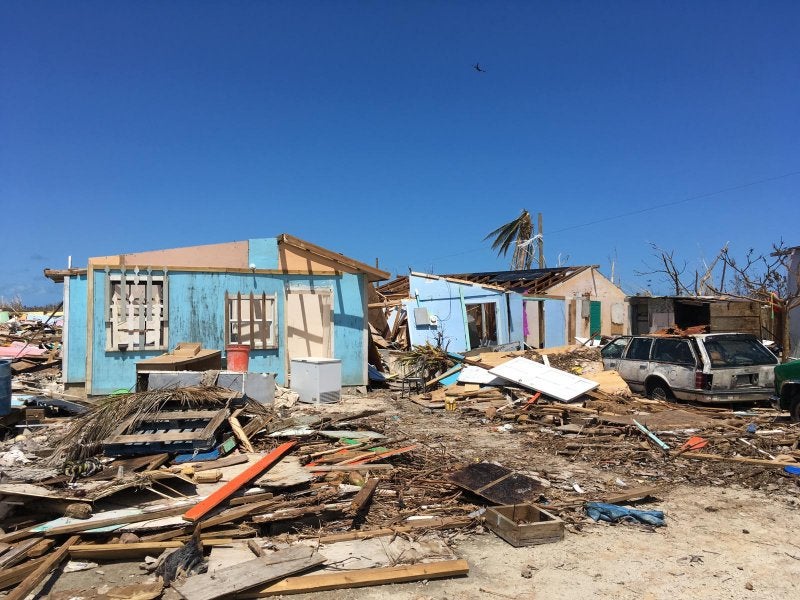 One survivor Stileman met, named Shane, who had been a chef at one of the tourist resorts “was tearful … looking for food, he wasn’t aware that there was hot food in the community centre.” Another, a woman named Stacy, had sheltered, terrified, along with hundreds of others for the three days of the hurricane in a small village hall with no water or latrine facilities.

When she came out of the hall after the storm, “she went back and everything she owned was gone; her house, her belongings, her clothes. She has absolutely nothing.” The old people’s home where she had worked had also been destroyed. “People really do suffer mentally,” Stileman tells me. “It’s post-traumatic stress disorder.” Stacy, too, didn’t know the community centre was providing food and water.

Many are being evacuated from Abaco, but there is a finite number of places where they can go. The Trump administration sowed further confusion by sending mixed signals about who would be allowed to come to America, including at one point forcing evacuees off a ferry bound for the US.

To donate to Team Rubicon UK from a British phone, text ‘DORIAN’ plus the amount you want to give to 70085. The default donation is £10, but you can to donate anything up to £20 per text. So, to donate £5, text ‘DORIAN5’. Each text is charged as a standard rate message.

American readers can donate by going to www.teamrubiconuk.org/give.