“Everyone wants to visit Homs. Some areas of the city ruined by war have become destinations for people to visit.”

Hussam Wali, a final year architecture student based in Homs, the third largest city in Syria, observed to me that not only residents, but people from other Syrian cities, had begun visiting the destroyed areas and taking pictures.

For the residents of Homs, wandering the ruins of their home city has become a part of everyday life. The urbicide of the city has led to half of its neighbourhoods being heavily destroyed. The ruins that remain are witnesses to the horrors and chaos of the city, they speak of the people who once lived and worked there, and the trauma they suffered.

For those in cities like Damascus, Tartus and Latakia, where much less damage has occurred, Homs has become a symbol of the loss, destruction and cultural cataclysm caused by the war.

Now, after more than six years of conflict, a heated debate on how to rebuild the country has emerged. In Homs, there are contrasting visions of the future. Some want to rebuild a shiny new city: a forgetful city that neglects not only its past, but also the war. Others want Syria’s past to lay the foundation for its future. They want to design a city that faces its history, including its dark periods. 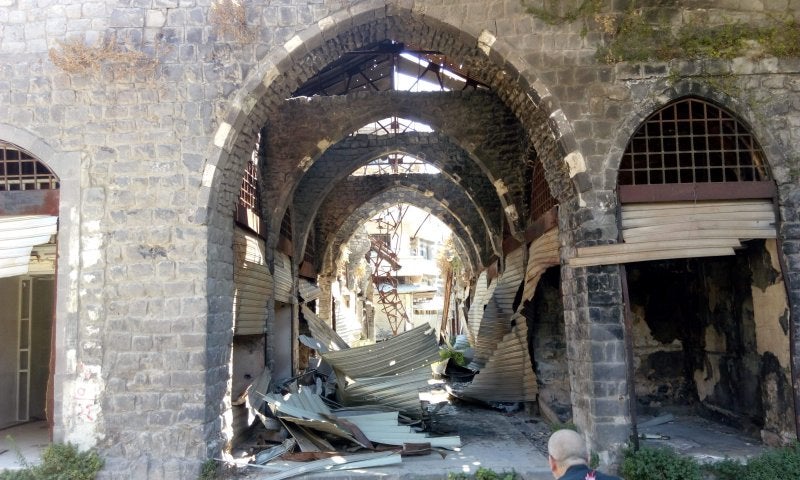 If the latter argument prevails, it will not be for the first time. Throughout history, the remains of urban decay, and fragments of tattered cities have been alluring to architects, urbanists, poets and planners. The Germans actually have a word for this fascination: ruinenlust.

In many cases, ruins serve as living memories that help cities and their citizens to remember their darkest history, and the lives lost. They are often seen as architecture for peace, helping to build and sustain it.

When rebuilding Hiroshima after the first atomic bomb exploded in 1945, a surviving building caused controversy. Should it be destroyed, or memorialised? In the end it stayed, and was renamed the Hiroshima Dome. It is now a Unesco site. According to the organisation’s website:

“This silent structure is the skeletal form of the surviving remains of the Hiroshima Prefectural Industrial Promotional Hall (constructed in 1914). It symbolises the tremendous destructive power, which humankind can invent on the one hand; on the other hand, it also reminds us of the hope for world permanent peace.”

But perhaps Oradour-sur-Glane in France is one of the most remarkable examples of preserving the wounds of wars. In June 1944, over 642 civilians (including men, women and kids) were shot or burnt alive by SS soldiers in Nazi-occupied France. The village was destroyed. After the war, it was decided to fully preserve what is left of the village, so the lives of people who were massacred there are never forgotten. A survivor of the massacre who lost his mother and two sisters in the carnage told the Guardian that: “It’s always difficult for me to come here…I relive my village in my head, hear its old sounds, put faces to the ruins. But it’s important to preserve these ruins and keep telling the story so it can continue to be passed down when we’re no longer here.”

In his book Ruin Lust, the critic Brian Dillon asked: “why are we fascinated by ruins?” He suggested that ruins (not specifically those of war): “recall the glory of dead civilisations and the certain end of our own. They stand as monuments to historic disasters, but also provoke dreams about futures born from destruction and decay. Ruins are bleak but alluring reminders of our vulnerable place in time and space.”

It is this vulnerability that I have seen in my own city, Homs, in which I spent most of my life. Streets have been turned into jungles of ruins and mountains of rubble. Mosque minarets are broken, churches are damaged and the whole city is pockmarked with bullet holes. People are losing the sense of belonging to their own city.

Despite destruction of our material culture, and collective memory, some Homs locals I spoke with are shocked, and sometimes fascinated by the ruined city.

“When I first saw the war ruins of Homs, I had a great pain,” Nay Alhassan, a 27-year-old architect from Homs told me. Alhassan moved to Lebanon in 2012, but she still regularly makes the journey from Beirut to her home city. “My eyes showed me these ruins as if they were built before the war. I saw them and remembered the lives inside these buildings… Even when they were ruined, they looked beautiful. Because of how much I cherish these places. It is like when you love somebody so much, you always love them, regardless what happens to them.”

Remembering the war will be very crucial to building our shared future. Buildings in a state of catastrophic destruction can help us to remember, reflect and rethink our city. They will help us to heal the scars of the war and, most importantly, to deal with our past, and to never forget.

Ruins of wars are caches of memories. Removing them eradicates the reminders of war’s dark heritage. But what to remember, how much to remember? And what remembrance is enough? These questions will prove controversial, but their answers will be important to sustaining peace. If in the future, people were unable to mourn, or prohibited to, then ruins will mourn. And in the future, when the generations who lived the war are no longer around to recount their memories , then ruins will speak their stories.

Today, images of people amongst the ruins in Syria have been sweeping across social media. Hussam Wali, the final year architecture student, who noticed this new phenomenon said “these ruins are turning into new monuments of Homs”.

Perhaps, some of these ruins in Syria should be preserved for us not to forget what we have been through. Just like the Hiroshima Dome, frozen in time among the modern towers.

Ammar Azzouz is a PhD researcher at the University of Bath and an architect for Arup’s London. He writes in a personal capacity.