“We used to decorate our house for Christmas every year in Syria. We would put our tree after Saint Barbara Feast Day on 4 December. We believe that Saint Barbara was escaping from her own family after she announced her Christian faith. Below the tree, we would put a crib to illustrate the birth of Jesus.”

Nabil Awad, a Kuwait-based architect from Homs, Syria, is remembering his days in Syria.

“Each Christmas, we would go to church for prayers… Each Christmas, my mother would make Turkey and Buche de Noel, we would drink wine and gather with our family,” he says. “My last Christmas in Syria was in 2011, after we left from Homs to Damascus due to the war. I have never been to Syria since.”

Like a living museum, Syria contains many historical churches that do not only reflect the weight of history, and the deep roots of Christianity and its continuity in the region, but also the rich life of different religions in this land. These historical monuments are markers of who we are, where we came from and where we are heading.

Eight years into the war in Syria, though, many Syrians, including Christians, have left the country to build a new life in another land. Scattered across the world, the memory of lost times, and Christmases past, still occupy the minds of the Syrian Christian diaspora. 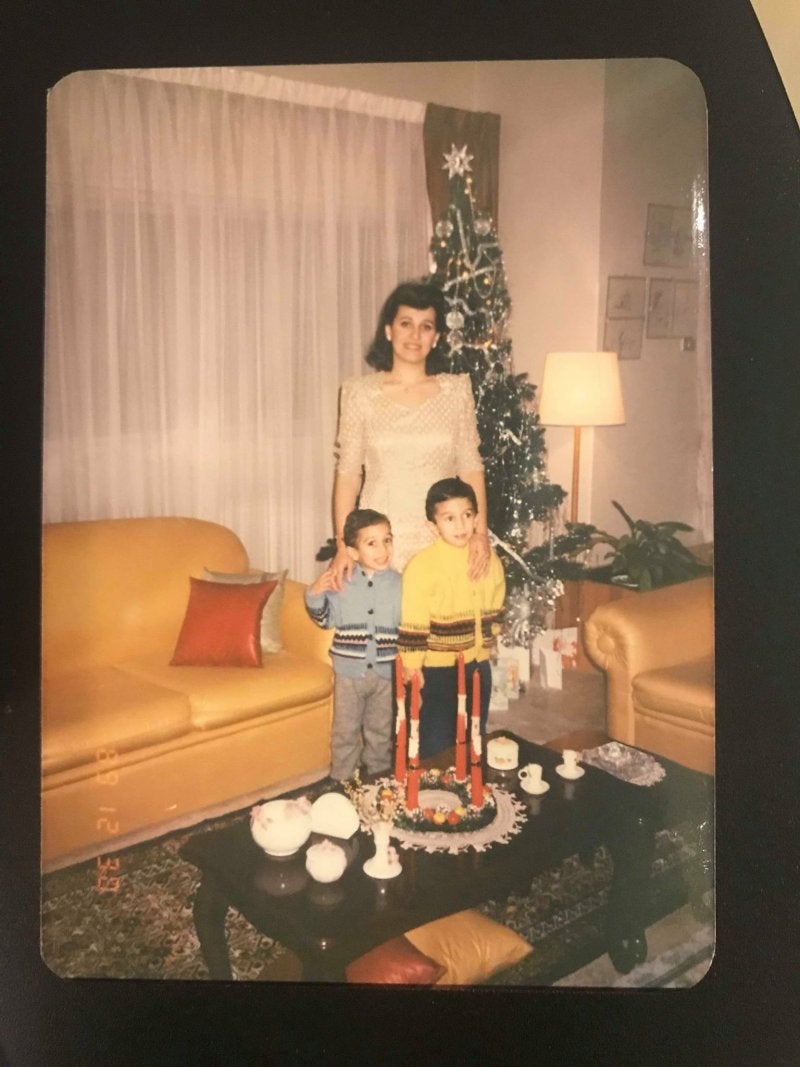 Ola Saadeh lived in the Old City of Homs.  “Local residents used to gather money to light the streets,” she recalls. Many neighbourhoods, as Al-Hamidiyah and al-Mahatta in Homs, would be transformed with the modest and intimate light decorations and Christmas trees. “It felt as if streets were competing to look nicer” she adds. “Our house would not be empty. My father’s friends, who were not Christian, came to greet us for Christmas.”

Christmas in pre-war Syria was for many a spiritual and a religious time of the year. Some fasted for 40 days before Christmas, Nataly Trabulsi tells the New Statesman. Helping the poor was also important. “The entire atmosphere of Christmas in Syria was religious,” Rim Elias, an architect based in Germany, says “Christmas is the time to remember the birth of Jesus Christ, the Savior of the World. It was the time of Ihsan, time to think of the poor, and support them – without telling anyone that you have made a donation, and without revealing who the donor is.” Ihsan is an Arabic concept of taking one’s inner faith and showing it in deed and action.

Many Muslim families joined Christmas celebrations in Syria. The family of Sherine Abd Al Samad, a Homsi architect now based in Dubai now, used to put up a tree, and her father would dress up as Santa Claus and give them gifts on Christmas day. Sherine went to the famous Christian school in Homs, Al Ghassaniah Orthodox Private School, which was founded in 1887, and participated in Christmas celebrations each year at school, with gifts, events and decorations. 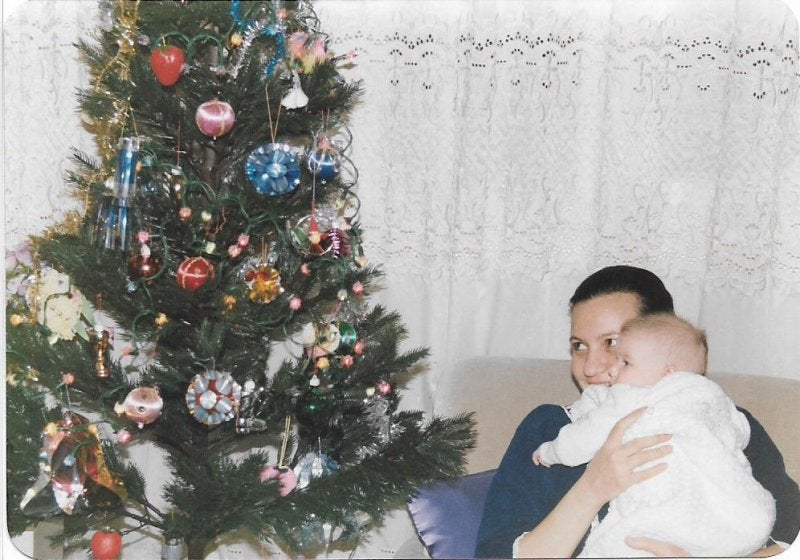 In exile, where millions of Syrians now reside, Christmas is different, depending on which region they live in. But even though they live now in safety, and are building a new future, many Christians I spoke to expressed their grief and sorrow seeing their own country destroyed. Many of them have been displaced from their own home, often more than once.

“One night, we packed only the necessary, and left our home in Homs.” Rim Elias says. “We were displaced five times within two years. Then we decided to sell our house in Homs in 2014.”

Rim was living in an area that became contested during the early years of conflict. “I miss the simplicity of Christmas in Syria with my family,” she says. While she now lives in Germany, her family is still in Syria. “One year, I did fast the 40 days. On its end, I went to St George’s Church in Homs for prayers, then to my relative’s house who is a Khoury (priest). The dinner was very simple; eggs, bread and cheese. But their door was open to everyone to come and break their fast. Christmas feels very humane in Syria.”

Some Syrian Christians in Western countries love seeing cities decorated for Christmas on such a large scale. But they also highlighted how Christmas feels more commercial and materialistic when compared to Syria.

Dana Matouk, who is based in Poland, says she no longer feels Christmassy. “I have not celebrated Christmas last year, nor the year before, nor the one before it. Christmas is being with family and the people you love. I miss the people I left in Syria. I still feel a stranger in Poland.”

These feelings of grief and sadness and the inability to celebrate reflect the individual and collective loss that Syrians have experienced. 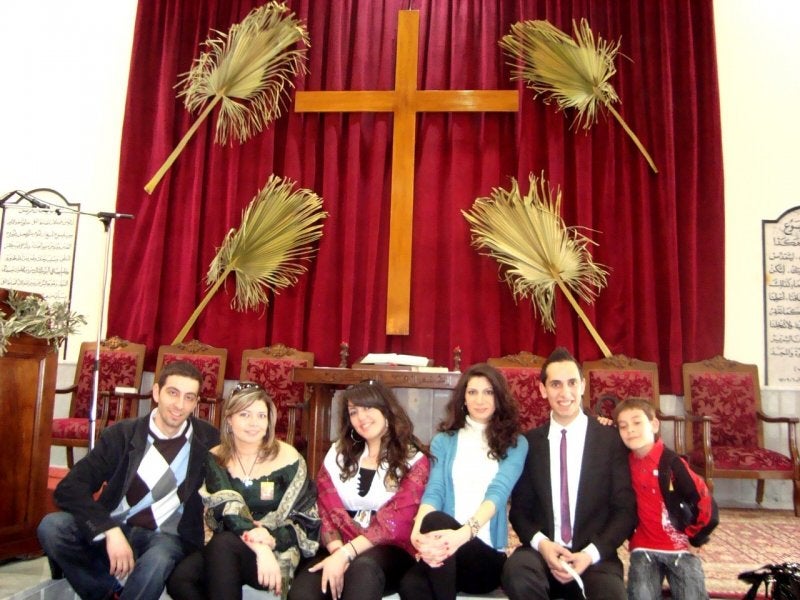 Syrian Christians in one of the churches in Homs, Syria. Credit: Dana Matouk.

Christmas is supposed to be a break with the ordinary, but Syrians no longer know what normal is, what an ordinary life is. Each of us has endured so much pain that should be unbearable to carry. Each person I spoke with has their own story, their own suffering that bars them from experiencing simply happiness.

Ola Saadeh, the Homsi who remembers lights in the street, is now in Germany. She fled fighting in the city in 2012, first to the countryside, and then to Europe. “I went back once to my home in April 2014 to find it destroyed,” she says. “I cried a lot and almost collapsed, I left for Germany and have never been back.”

She adds: “People are trying to get out of the war mode, by putting a tree or Christmas decorations. But if you look inside them, people are really tired, there is no joy to celebrate.” This experience is not just a Christian thing, but one that affects all Syrians, she says. “We have lost the ability to feel Christmas and Eid. But I know, that despite all our loss, as long as there are people, there is life, and it will continue.”

Nataly Trabulsi tells the New Statesman that faces in Homs have changed. “The people that we used to know are no longer there. Some of the churches are still there. But not the people.”

I write this piece not knowing what the future will hold, and not able to imagine the pain endured by each individual I spoke with.

Destruction. Displacement. Exile. Exodus. Bereavement. Separation. Loss. Fears. Disappearance. Christmas is the time to celebrate, but not so much for us drowning in conflicts. I write this piece and think of a future where every Syrian returns to their home, be with their family, and celebrate and build our future together. But I also write this to remember, and in hopes that this memory will be passed through generations.

Ammar Azzouz is an architect and an analyst for Arup. He grew up in Homs and now lives in London.