A United Nations report plus documents from the Eritrean community in Britain provides evidence of the activities undertaken by agents of the state, many of them operating from the Eritrean embassy in London. This, despite British nominal support for action to end this extortion, and assurances from the Foreign Office that action has been taken to end the practice.

The UN report by a team of expert – led by the Canadian Africa expert Matt Bryden – laid out in chilling detail the range of methods being used by the Eritrean authorities to extract funds from the diaspora.

Without proof that a two per cent tax on all income has been paid, Eritrean passports are not renewed, visas are not issues, businesses not permitted and money cannot be transferred to relatives.

This is a case from the UK, cited by the UN Monitors.

Mr. “K” left Eritrea in 2000 and established himself in the UK. In 2007, the business licence of his parents’ import-export company in Asmara expired. When the family applied to renew their business licence, the authorities in (the Eritrean capital) Asmara stipulated that in order to obtain approval, their son needed to acquit himself of the 2 per cent diaspora tax payment. When his family contacted Mr. K. he replied that he did not want to pay and his parents renounced him as a member of his family in order to obtain the license, creating a longstanding rift in the family.

The UN Security Council condemned these practices three years ago. Britain voted in favour of resolution 2023 of 2011, which “condemned the diaspora tax”, “demanded” that Eritrea ended it and called on all states to ensure that it ceased.

The UN report says it has received assurances from the Foreign Office that action has been taken to end these practices.

On 20 May 2011, the Government of the United Kingdom notified the Eritrean authorities that, since aspects of the collection of the two per cent tax may be unlawful and in breach of the Vienna Convention on Diplomatic Relations, until it was demonstrated otherwise, the Eritrean embassy should suspend, immediately and in full, all activities relating to the collection of the tax.

Yet there is evidence that the practice continues to this day. Members of the Eritrean diaspora living in Britain have told the New Statesman that the taxes continue to be demanded from them. Although they are concerned to remain anonymous, the New Statesman has a document showing the payment of the tax dated October 2012, more than a year after the Foreign Office issued its warning to the Eritrean ambassador. 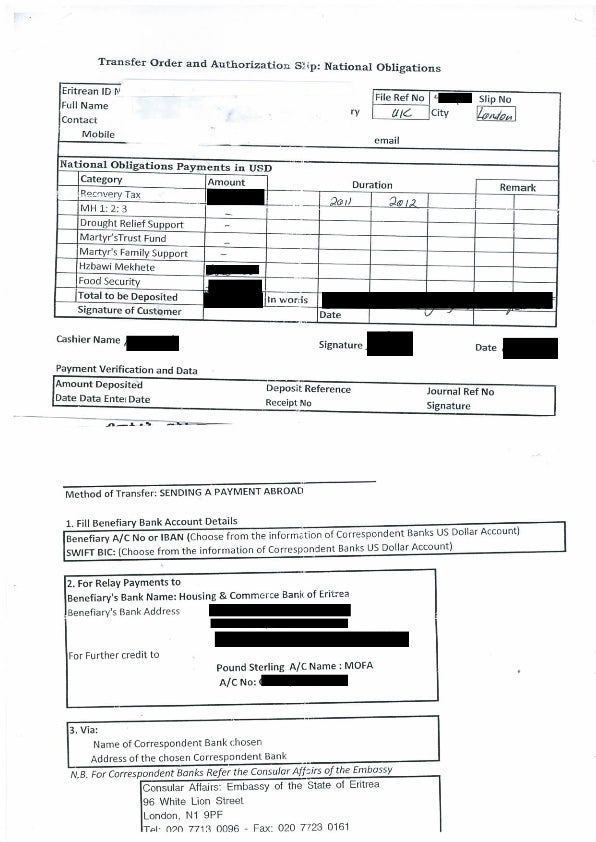 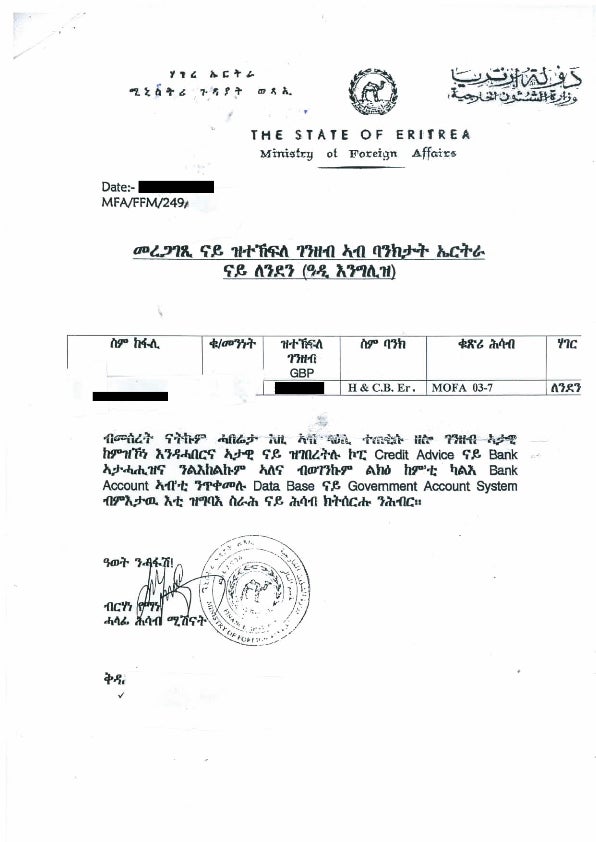 The translation of the receipt reads:

Per the information we received from you, we confirm that the above sum has been credited into our account and we are enclosing the credit advice. Please complete the transaction in accordance with the procedures, entering it into the database and also the government account system.

Victory to the Masses!

Elsa Chyrum, an Eritrean human rights activist, says the Eritrean Government and party agents have since resumed tax collection across the United Kingdom.

Selam Kidane, an Eritrean working with the diaspora agrees. She says the authorities have just altered their strategy: “Following pressure from the British government the Embassy simply changed their collection method. Now most of the collection is done in Asmara, but the amount required is still the same.” “This puts a lot of pressure on families with limited means,” she says.

While the British government fails to halt this abuse, others have acted. In May the Canadian government expelled the Eritrean envoy.

But in London the Eritrean embassy continues to operate, unaffected by UN sanctions, or the ineffectual threats from the Foreign Office.