Must I? But really, though, must I? This stuff is bad for me. I’ve been trying to give it up.

But, no, according to the people who pay my salary – my “enablers”, one might term them – apparently I must. Just when I thought I was out, they pull me back in.

So, here, again, are nine thoughts about one of Daniel Hannan’s Tweets. We join the great man as he prepares to intone about the fact his government has been accidentally deporting the Windrush generation and their children. This is fine.

Here’s an unpopular opinion on the #Windrush affair. You could say, the system worked. A newspaper unearthed a scandal (well done @ameliagentleman). Pundits & politicians unanimously decried the injustice. Ministers listened and changed policy. That’s what’s meant to happen, no?

1) The phrase “unpopular opinion” does not mean what Daniel Hannan seems to think it does. As generally used on the internets, it tends to imply something uncomfortable, unfashionable – but still ultimately defensible, perhaps even superior.

“The fact the government has promised to stop criminalising pensioners through its own wretched incompetence shows that the system works,” is not an unpopular opinion. It is a fucking stupid opinion.

2) While we’re on the subject of internet language, are you aware of the concept of “the ratio”? Short version: if a statement made on Twitter receives a significantly higher number of replies than it does likes or retweets, then it’s a fairly good bet it was a stupid tweet, and the original poster is now, like the railways following a Corbyn landslide, getting publically owned. 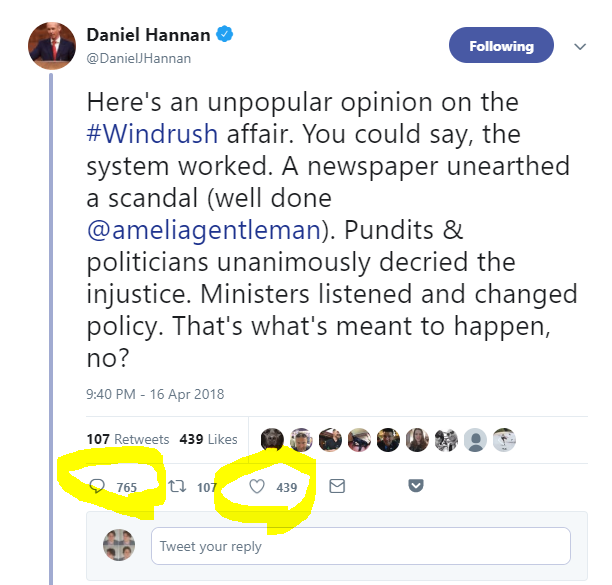 No idea what made me think of that.

3) I’m also not sure about the phrase “Windrush affair”. That’s quite a neutral term, isn’t it? “Windrush Scandal” or “Windrush mess” would also be appropriate terms – but using those would risk publicly acknowledging that a Conservative government has fucked this right up. So we get “Windrush affair” instead.

4) “You could say, the system worked”. Well, yes, you could say that. You could say, “The British Empire invented democracy” or “The tides are caused by the sun” or “I’m going to travel back in time and disguise myself as my own aunt Beryl”. Those are things you could, literally, say. That doesn’t mean that they are not both wrong and stupid.

5) Also, if “This was a disaster: once people complained we stopped it being a disaster” is the “system working”, then you can use that to excuse almost literally anything.

If you don’t give a shit about the people who get hurt on the way, then so long as the world keeps turning then, well, the system is working isn’t it?

6) To write the phrase “Pundits and politicians unanimously decried the injustice” yet still see this as a vindication for quite how brilliant the British government is takes a level of doublethink of which Winston Smith would be justly proud.

I’ve spent more time trying to unpick the psychology of Daniel Hannan MEP than any sane person should, and maybe I’m being too generous to him, but I don’t think it’s that at all. I am prepared to believe that, when he describes this scandal as an “injustice” (though not, you note, as a scandal), he is being sincere.

And yet – he fundamentally believes that the government is run by good people trying to do good things. Like Daniel, the Prime Minister is a Conservative: so while she may be in error, the fundamental decency of her motives is never, to him, in doubt.

The exact identity of the victims of May’s abysmal policies is almost unimportant compared to that. Her government could be locking up Poles or seven year olds or Liberal Democrats, I suspect, and Hannan would be making almost the exact same defence.

9) It is hard to imagine him being quite so sanguine if a fuck up on this scale was the work of a Labour prime minister. If Gordon Brown had done this, Dan would have posted a 45 minute YouTube clip in which he rants about the sanctity of Magna Carta, probably in front of a map. If it were Corbyn, he’d probably start talking about Stalin.

But no: it was a pro-Brexit Conservative government, so Hannan’s mercy is infinite.

It’s lucky, I suppose, that there are no examples from history of people throwing their support behind horrific governments, just because they happened to agree with them on one or two things. Otherwise, Daniel Hannan might come out of this looking really stupid.