#TransLivesMatter, as the hashtag has it. It’s a response to the death by suicide of teenage trans girl Leelah Alcorn, of Ohio, and those using social media to share reports and tributes consider it an essential part of the campaign to raise awareness of the suffering of young trans people. But when it comes to suicide, reporting can be a matter of life and death. “Copycat suicides” – in which individuals with an underlying vulnerability imitate suicidal actions from media reports – are a real and documented phenomenon. Along with a sense of basic dignity and respect for the grieving family, they are the reason that journalists should always take into account the Samaritans’ best practice media guidelines. These are simple, reasonable, and ignored by the media time and time and time again. They’re being ignored right now in the coverage of Alcorn.

It’s hard to think of any non-celebrity death this year that has received as much coverage as Alcorn’s. Searching for her name on Google news turns up 183 articles at the time of writing, with the earliest published two days ago (I’m not going to link to any of the reports). In that piece, almost every single one of the Samaritans’ guidelines is broken. The guidelines tell journalists to “exercise caution when referring to the methods and context of a suicide”: the report provides the means Alcorn used in the headline. The guidelines tell journalists to “avoid the suggestion that a single incident […] was the cause”: the report doesn’t discuss any possible underlying causes, but presents the reported hostility of Alcorn’s parents to her trans status as the sole contributing factor.

It goes on. “Be wary of over-emphasising community expressions of grief. Doing so may suggest that people are honouring the suicidal behaviour rather than mourning a death,” say the guidelines. The report details widespread memorials and candlelight vigils. The guidelines say: “Be careful not to promote the idea that suicide achieves results.” The standfirst of the article quotes Alcorn’s suicide note (something the Samaritans warns against directly) saying “My death needs to mean something.” The Samaritans urges publications not to give undue prominence to pictures of the deceased, particularly when the deceased is young: a photograph of Alcorn, youthful, smiling and sweet, dominates the report. “Consider the lifelong impact that a suicide can have on those bereaved by a suicide,” says the Samaritans; Alcorn’s parents are mentioned only as villains, based on a single source, and their grief is not acknowledged. Her wider family and friends are similarly absent. In fact, of the Samaritans’ seven guidelines, the only one that the story doesn’t breach is the suggestion to provide information on support services. 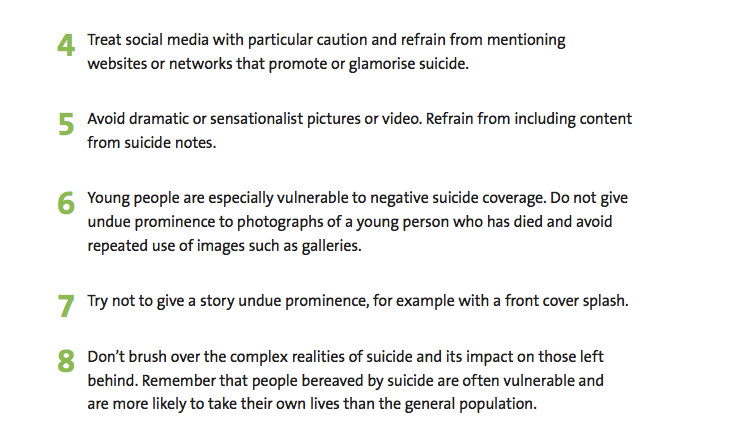 An extract from the Samaritans’ guidelines.

That first report has been shared about 110,000 times, and it provides the template for most of the subsequent accounts. I went through more than 40 news stories and checked them against the Samaritans’ best practice guidelines: over half didn’t even include a helpline number, and only three avoided giving the exact cause of death. I found phrases such as “wake-up call”, implying that Alcorn’s death would lead to dramatic social change, and “view gallery” encouraging me to click through more endearing selfies. One headline read: “Transgender teen’s suicide goes viral; celebrities react.” (The Samaritans guidelines also address social media, pointing out that sharing information there has many of the same effects as traditional journalism, and so the same care should be exercised.)

The sheer volume of reporting means that Alcorn has herself been made famous through death. There couldn’t really be a more compelling prospectus for copycats. The message an unhappy, isolated trans kid can take away from this is that death will bring you all the validation you’re missing in life. Your last words will be republished around the world and your parents will be punished for their failure to understand you. The reports even include a proven method you can follow.

And there’s another disturbing aspect to the public reaction: Alcorn’s parents, and specifically her mother, have been directly harassed by those who blame them for the death of their child. It is hard to imagine much worse that burying a child, but to lose a child by suicide must bring an almost unbearable degree of self-reproach to the loss. There may well be many things Alcorn’s parents could or should have done differently, but none of them merit the punishment of global public shaming on top of massive private grief. (The Samaritans’ website points out that “people bereaved by suicide are often vulnerable and are more likely to take their own lives than the general population”; bullying is also a risk factor. It is simply massive hypocrisy for anyone to target the grieving in the name of preventing suicide.)

Trans lives matter. We know that transgender people are at particular risk of suicidal thoughts. So why are people endorsing and sharing material that, if it has any effect at all, is likely to be the catalyst for a trans youth to attempt suicide? Human are messy, overlapping things, however we live and die. We are tangles of love and mistakes. All of us are more complicated than the flat symbolism of the martyr, and all of us deserve to be seen in our full untidiness – the kind of untidiness that would never make for neatly consumable news copy. “Virality” chips away the edges of our humanity into shareable portions. We turn a death into a good story, and the grotesque possibility is that there will be someone scared and lonely listening to us, who will turn that good story into their own death. When we talk about suicide, the most dangerous thing we can offer is an attractive face and an easy answer.

If you are affected by any of the issues raised in this story, you can call the Samaritans on 08457 90 90 90 or email jo@samaritans.org. Mermaids provides support for transgender teenagers and their families in the UK.