Any topic that mixes children and manipulation has a tendency to become emotive. Free-to-play developers don’t like to talk about it. The gatekeepers of the mobile marketplaces, Apple and Google, remain undrawn on the issue. And yet over the past few years you’ve probably read the same story many times over; a child blows hundreds or thousands of pounds buying berries in Smurf Village, or donuts in The Simpsons: Tapped Out!, or gems in Clash of Clans.

The games in question are always ‘free-to-play,’ and thanks to such good publicity the OFT recently published a rather coy report. But an assumption running through it troubles me. There is much discussion of principles and good practice, but the fundamental question of whether F2P is an appropriate component of children’s entertainment never seems to be asked. Surely this is worth serious consideration rather than meek acceptance.

Is it appropriate for children’s entertainment to be designed around psychological triggers that are proven to extract money? Stories about these games often make reproving points about passwords and permission settings. This shifts the focus from where it should be – the games and the coercive techniques they use on young players – towards the stock villains of stupid parents. In the straw man stakes this is a giant. When a child or teenager can spend hundreds of pounds on a videogame in minutes or over longer periods of time, it seems to me that the problem might be the videogame.

What sparked these thoughts was the iOS release of Tiny Death Star. Not just a perfect metaphor, this is a tower-expanding game, published by Disney, using one of the biggest children’s licenses in the world as a Trojan horse; it is all-too-easy to imagine how many parents will let their kids download a free Star Wars game. Well, little Johnny is about to enter a world of ‘fun pain’ (to use the oxymoron credited to Zynga’s Roger Dickey), where the only goal is to convince him to buy stuff.

I encourage you to look at screenshots and decide whether this game is targeted at children or adults. Tiny Death Star‘s design is a type referred to within the industry as ‘whale-optimised.’ A ‘whale’ is an individual who spends enormous amounts of money, and TDS is designed to encourage and facilitate such customers – the true cost of the free to play model, where the minimum is free but the maximum is infinity. 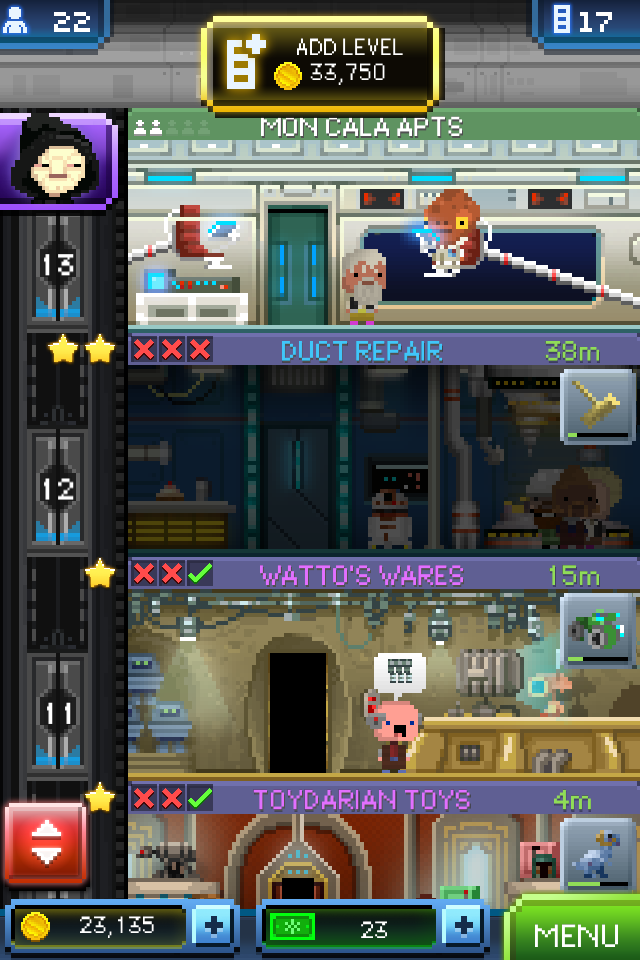 There are many psychological tricks used to this end. First, the real money side is disguised behind a layer of in-game currency – in this case, coins and ‘Bux’. People tend to make much better decisions (for themselves) when in-game purchases are clearly linked to real money; Tiny Death Star‘s Bux are a layer of insulation from this good sense. Children do not need £7 to buy a Yoda sprite; they need 150 Bux. And consider the way in which Bux are bundled; 25 Bux for £1.49, 65 for £2.99, 150 for £6.99. Aren’t the maths behind that last leap designed to baffle?

Tiny Death Star‘s interactions are designed to provide busywork – you add levels at the rate of one or two a day, paid for by ‘stocking’ levels with goods. Stocking a level can take between a minute to four or five hours, after which the shop needs to be tapped again to start selling. The game is composed of endlessly repetitive tasks like these designed to bottleneck, and itch while doing so. The game makes it hard to do anything now , because delays mean the player is tempted to spend Bux. If there is one thing children lack, it is patience.

The coup de grace is the elevator. This is the most ‘gamey’ element of Tiny Death Star, and designed to subtly degrade in utility the more you play – encouraging a spend on a better elevator, which of course costs Bux. What I mean by degrade is that the original is slow, but when you only have two or three floors this doesn’t matter. By the time you have ten or twenty floors the speed matters a lot more, which the game also reminds you of with frequent popups. This is a nefarious piece of design, but it is hard not to admire its subtlety.

It is telling that Dream Heights by Farmville creator Zynga – a company notorious for its exploitative ‘whale-optimised’ designs – has similarities with Tiny Tower. The game’s developers Nimblebit wrote an open letter in comic form highlighting parallels between the two products, and later revealed Zynga had tried to acquire them. Nimblebit’s Tiny Death Star is just a reskin of Tiny Tower‘s core mechanics.

If Disney will commission and publish a free-to-play game with these mechanics, parcelled up as a cutesified version of one of their biggest brands, then anyone will. This is not about parents fiddling with device settings, or hiding their credit cards. It’s about whether free-to-play is ever an ethical way to sell videogames aimed at a young audience, and in particular designs like Tiny Death Star where there’s no ceiling on spending.

It is not one game or developer or publisher that got us here. It is not Nimblebit or Disney to be blamed, but the industry’s ever-increasing access to a young audience, a situation that leads in incremental steps to petty dominions rather than entertainment, and eventually the presence of a £70 ‘microtransaction’ in a My Little Pony game.

Free-to-play is not inherently an evil business model, but in games aimed at children it feels somehow grotesque – and certainly worthy of much more fundamental scrutiny than that undertaken by the OFT. Children should not be expected to have discretionary income, or sifted through for big-spending ‘whales.’ They are too inexperienced to know better; that’s why they’re children, and that’s why they need adults to protect them from lousy practices. Tiny Death Star suggests we’re doing a damn bad job of it.