Voltaire said that if God didn’t exist, it would be necessary to invent him. But does that also hold true in the opera house? The director Stephen Langridge and his team at the Royal Opera have celebrated Wagner’s bicentenary with a Parsifal for a post-Christian world – a tale of redemption without a redeemer. There’s nothing shocking in that, perhaps; the inscrutable, layered symbolism of the composer’s “stage consecration festival play” has often prompted directors to recoil from spirituality. But if you take God out of the opera, then you have to replace him with something, don’t you?

Not according to Langridge. The motif of his conception is a giant white cube that dominates the stage space for all four hours of the performance. Sometimes opaque, sometimes tantalisingly open to view, by turns permeable and impenetrable, the cube is at once altar, prison, heaven and hell – an otherworldly touchstone of a space. At times it contains a hospital bed, home to mankind’s ailing monarch, Amfortas, and at others it acts as a sort of portal to the past, staging flashbacks of the opera’s prehistory. By the end, though, it lies empty. It’s a mark of the confusion of Langridge’s vision that this potentially powerful sleight of hand feels more like an evasion than an answer.

Jeremy Hunt: Tory saviour or “Theresa May in trousers”? 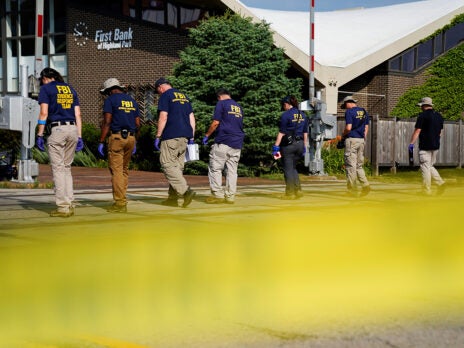 Republicans put US shootings down to anything but guns

His Grail Knights are anything but evasive. Often represented in quasi-Masonic robes and generic rituals, here the business-suited members feel disturbingly specific in their rites. What feels initially like a UN delegation takes a darker turn when, women banished, the knights assemble for communion. Their grail is no cup but an adolescent boy. Stripped down to a loincloth, his flesh is pierced, before the blood is distributed among the faithful. It’s a provocative image, taking the more sinister undertones of Wagner’s plot and thrusting them into the spotlight, more horrifying than any imagining. Later, daubed stigmata-like in blood, militants set out to do battle – but with whom? For what?

Things are rather more satisfying musically. The conductor Antonio Pappano’s account of the score is radiant and if the unfashionably slow tempos deny a clear sense of action or dramatic trajectory, they force us to surrender to the meditation of this all-but plotless opera. Textures unfold like the Flower Maidens’ petals (or like they might unfold if the seductresses hadn’t been transformed into Wags) and brass colours are gilded, glowing with a clarity that is absent from Langridge’s visual symbolism.

René Pape leads the cast as a genuinely noble Gurnemanz, achieving a clarity of diction and beauty of line that unfortunately eludes Angela Denoke as Kundry. Hers is a ravaged, battle-weary siren, rough around the edges and painfully tight at the top of her range. Her Act II encounter with Parsifal finds her tiring audibly, and although dramatically it is rather effective, musically it doesn’t quite achieve the ambition of Wagner’s swooning lines. Gerald Finley grows ever more surely into a Wagnerian with his intensely human Amfortas – his rounded tones set off by the acid brightness of Simon O’Neill’s Parsifal.

The cloying piety of Parsifal isn’t to all tastes and for anyone seeking salvation of a more bracing kind this month there was John Eliot Gardiner and his Orchestre Révolutionnaire et Romantique. Also celebrating a major birthday this year (a mere 70 to Wagner’s 200), Gardiner shows no hint of tiring and may yet have his best performances ahead.

In a year in which we’ve heard an awful lot of Beethoven symphonies, Gardiner’s are still a must. The speeds are a whisker slower than in the past but strangely this seems to add to their intensity. Passages that once dashed past now have their pace anchored, generating that electric tension that exists only at the junction of breakneck release and restraint. The opening of the youthful Second Symphony never paused in its narrative, always on the move in search of answers. It found them in the highly characterised wind solos of the second movement – sardonic bassoon, cheeky flute.

The First Symphony was all calculated rusticity (musical shabby chic at its most artful), with syncopation battering against elegant phrasing, but it was in the Eighth Symphony that things came to a head with an opening Allegro Vivace that wound itself so far past frenzy that it had nowhere to go but into the sudden silences, lurches of tempo and musical non sequiturs that can often seem baffling.

Whether we call it salvation, redemption or resolution, both Wagner and Beethoven strove tirelessly after it in their music. Two musical champions entered Chapel Perilous this week but of them only Gardiner found what he was searching for.