The first time I was told to shut up was in 1987 when I dared to question the policy of the Thatcher government. “Won’t it lead to inflation and a decline in the pound?” I asked.

The next time was in the late 1990s when I questioned the wisdom of investing in companies that made no money, had no products and were just ideas. More recently I wrote an article pointing out that the US housing market was falling to pieces and again I was informed I was scaring the horses unnecessarily.

So it’s not surprising that I am currently being shouted down about the global equity markets. After all there are quite a lot of reasons why anyone would want them to keep going on their stratospheric trajectory: investors like it, politicians like it because it creates a feel good factor amongst the electorate and, dare I say it, fund management companies like it because their revenues increase. But, unfortunately, the evidence and the vested interests are once more diverging.

The reason is the money sloshing around the system – especially in the United States. There is good evidence to show that banks, stuffed with cash, are helping feed the rising stock markets. You can see it in the gap between their deposits and what they are lending to the system. As the banks have pulled back on their lending activity, so the amount of money available for investment and speculation has risen – and with it the US stock market. 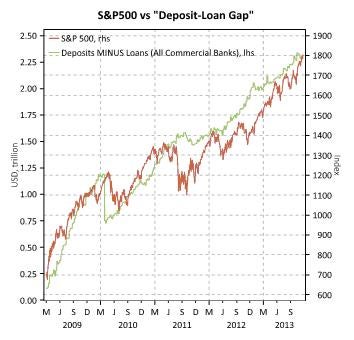 This isn’t as conspiratorial as it might sound – it’s actually one of the desired side-effects of quantitative easing. But has it gone too far?

There are many ways of looking at what the “right” level for a stock market might be. Here is one of them which has, in the past, been very reliable; mix together fundamental factors like employment, the cost of living and how consumers feel and relate this to the stock market. The result is remarkably accurate. Alarmingly, theory and practice are now diverging in a way they haven’t in the past. 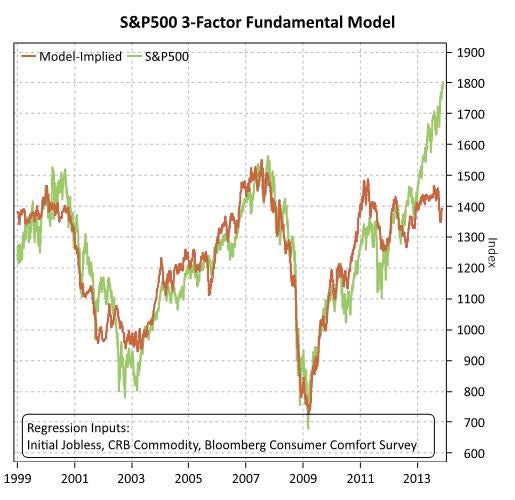 The US Federal Reserve has signaled that it isn’t prepared to stop completely the process of pumping up the financial system through QE for a long time – it may slow the process in December or in 2014 but that isn’t the same as switching off the life support system. So this can go for quite some time. But we are now entering into the zone where the financial system is becoming twisted and distorted out of shape so badly that the original intentions of QE are being lost in its side-effects. I think it’s time it was stopped … is that shouting I can hear in the distance?