Companies are awash with cash. They’ve been hoarding a war chest since the financial crisis hit in 2008. It has achieved ridiculous proportions; in the US and UK corporate bank balances have doubled in size, Japan has recently seen a spike while Europe has also built a buffer, if not to the extent of other regions. However the signs are that companies are beginning to deploy this money – especially in the UK.

There are the obvious things like share buy-backs, and mergers and acquisitions, that you can do with excess corporate money, but more encouragingly companies are beginning to think in a new way about the next generation of people working in their businesses. Increasingly, a new form of sponsorship is emerging. In moves not seen for a generation, companies such as the accountants Deloittes are hiring young people into their businesses as an alternative to going to university. Business is beginning to invest in young people, filling the gap left by universities that offer courses of doubtful relevance at prices that are just too high.

The general public is smart enough to detect the whiff of corporate insincerity in any charm offensive – tokenistic community-based projects will be seen through as box ticking Corporate Responsibility initiatives that offer little lasting relevance. Businesses will only truly “put something back” if given the right incentive to do so and there is nothing like the profit and cost motive to do that especially in the new era of shareholder activism. The Labour Party’s newly announced policy to “tax the bankers” to provide youth training schemes in that respect, once more, misses the mark. It misses the mood of the day, that there is a new dynamic at work that will see companies investing in young people because it makes business sense.

Sadly, the negativity towards business identified in The Trust Deficit: After the Crash by the research group Populus for the legal firm DLA Piper, is reinforced by mainstream economists like David Blanchflower and politicians like Ed Miliband. Writing in The Independent this week Blanchflower indulges himself in yet another populist diatribe which offers little except the tired observation that some people have more money than others and because of the way unemployment in this downturn has hit the non-graduate pay grades, the income gap between them and graduates has increased in the past five years.

What did Boris Johnson know about Christopher Pincher?

What if Keir Starmer’s gamble backfires?

What Miliband and Blanchflower both miss is that if pay structures in certain parts of the economy aren’t sustainable or aren’t valued then they won’t last – they will wither and die of their own accord. It does not need a tax – it does not need a law for that to happen. Besides, with the economy picking up, they are starting to sound somewhat behind the evidence. We don’t have an incomes policy and we don’t, thank goodness, have a limit on what any individual can earn in our country and long may that last. Treating the lawful activity of whoever it is in society who earns super-normal money (which in turn feeds the Exchequer) whether that is a footballer, pop star, entertainer, private company director, public company director or, yes I’m going to say it, a “banker” as immoral is an otiose argument which only has currency at the trough of the economic cycle. That moment has passed.

In a capitalist system, like ours, you will always have cycles. Capitalism is, in that sense, inherently unstable and liable to peaks and troughs – Karl Marx appreciated that. This requires the existence of a safety net to catch people when they fall. That is the implicit social contract we are involved in. But in this downswing a new part of the safety net has emerged – one which protects talented young people from the penalty of government education policies. It is one which will see companies deploying their cash reserves, taking on a positive role in shaping the next generation of workers by helping them over barriers to entry into higher earnings via education no matter their background. Getting the administration – and opposition – of the day to cooperate with and praise that idea is much more useful than replaying tired class war ideas that send the wrong messages to our young people about the possibilities of work and what business contributes to society. 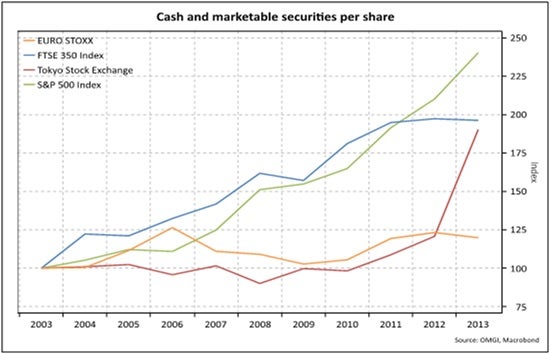