It does, you’ll admit, take a certain mindset to make the state of Britain’s welfare system the central focus of a story about the accidental deaths of six children. It requires a certain – shall we say – detachment from humanity to describe these innocents as having been “bred”; to place their picture under the headline “Vile Product of Welfare UK” so that they suddenly aren’t so much victims of a tragic accident as victims of left wing political thought.

You might say that this easy conflation of one man’s despicable behaviour with thousands of genuine benefit claimants – many of them in low paid employment, others desperate for any kind of work but struggling to find it – is abhorrent. You might well find this incendiary oversimplification of a complex tragedy revolting; the exploitation of the deaths utterly nauseating. I’d be with you on that.

You might also claim it’s cynical – but I believe you’d be wrong there. As it happens, I have friends who work or have worked at the Daily Mail, and I’m reliably informed that its editor genuinely believes all the stuff he publishes – indeed, gets so worked up about it that as his underlings scurry around the newsroom praying they aren’t the next recipient of one of his famous “vagina monologues”, they rather fear for his health.

But of course, Paul Dacre’s hardly the only one who gets angry about the issues surrounding welfare. On left and right, outrage is the default setting. I’ve previously written about horrific cases of abuse by the state, cases which have moved me to tears in the course of my research. And at the same time, the millions who work hard for low pay have every right to be furious about the notion of the lazy and feckless milking the system and living off their wages.

And the problem with these inflamed passions and the surrounding hyperbole is that people tend to miss the point. For a start, we’ll presumably spend much of today talking about the Mail’s front page and ignore the fact that the Sun’s leader is even more virulent – after line upon line of frenzied outrage, it actually concludes: “Let’s hope this is the last time the State unwittingly subsidises the manslaughter of children”.*

But anyway, within minutes of an image of the Mail’s front page being tweeted, the fury was palpable. Immediately came the response: “He did it for the handouts!” But the problem is that doesn’t make this story about benefits any more than it makes Stephen Seddon’s murder of his parents a damning indictment of Britain’s inheritance system. Just as a right winger could claim this is about the welfare state, so a feminist could claim this is about patriarchy – Philpott had a history of violence towards and controlling of women, and the plan was at least in part an attempt to seek vengeance on his former lover Lisa Willis.

So we move onto the next argument – that Philpott generated £60,000 a year in benefits, that the effect of such a life on welfare is more nebulous; that his poor morals are a clear indication of the immoral mindset bred by the system. And here it gets a little more complex. He did indeed bring in £60,000 a year – but how? Mail readers would have to turn to the inside pages to find that actually the cash came to his two lovers in working tax credits and child benefit for the eleven children, and that he “Refused to let the women manage their own financial affairs.” As the paper has it: “They worked, he took the money.”

You might still see this as a story about the profligacy of the system: but it’s mostly about one man’s ability to control two women without any of the various authorities with which he had contact spotting him or challenging his behaviour. It’s a story about a failure of justice (Philpott served just three years and two months for attempted murder and GBH years previously). You might add – it’s also a story about the fact our welfare system has expanded because of our legislators’ failure to force employers to provide adequate wages to the lowest paid (even under the latest reforms, he could still coin in £52,000). Like six out of ten benefits claimants, the women in this case had jobs. The majority of children and working-age adults in poverty in the UK live in working, not workless, households.

And then comes the argument – “It’s all very well for the left to get hysterical about this, but only the other week the Mirror had an image of IDS hammering down nails on the coffins of the poor.” And here the argument descends into one of nuance – above all, the notion that there is a long tradition of grotesquery in cartoons, for the very reason that the characters are symbolic. Even if you don’t buy that, it barely excuses this appalling contortion of a real-life tragedy into an exercise in political point-scoring.

And speaking of political points, it didn’t take long for this to become a rallying cry for press regulation. Yes, if you want to complain to the PCC’s Code of Practice Committee, you need to address your complaint to Paul Dacre. That can’t be right. But I struggle to see how a new code of ethics would stop this sort of front page being published without restricting the publication of, say, the aforementioned IDS cartoon – never mind the fact that however mendacious that headline might be, conclusively proving it to be the case is impossible. Many of us – myself included – found this front page hugely offensive. But the problem is, someone’s always offended, somewhere. There seems to be a belief that with just a few well-chosen words we’ll turn the tabloids into the Economist overnight. We won’t, and nor should we try to.

It’s at such moments, of course, that Twitter is at its worst. You want to hurt the Daily Mail? Then don’t buy the paper, don’t read its website. Just laugh at it. Debate the people who think this front page is fair as calmly as possible. When people are angry, they tend to miss the point. As we saw with Savile, it’s all too easy for the victims to be forgotten once the internecine media squabbles reach fever pitch.

On that note, ironically, the most moving coverage of the case is in this morning’s Daily Star. 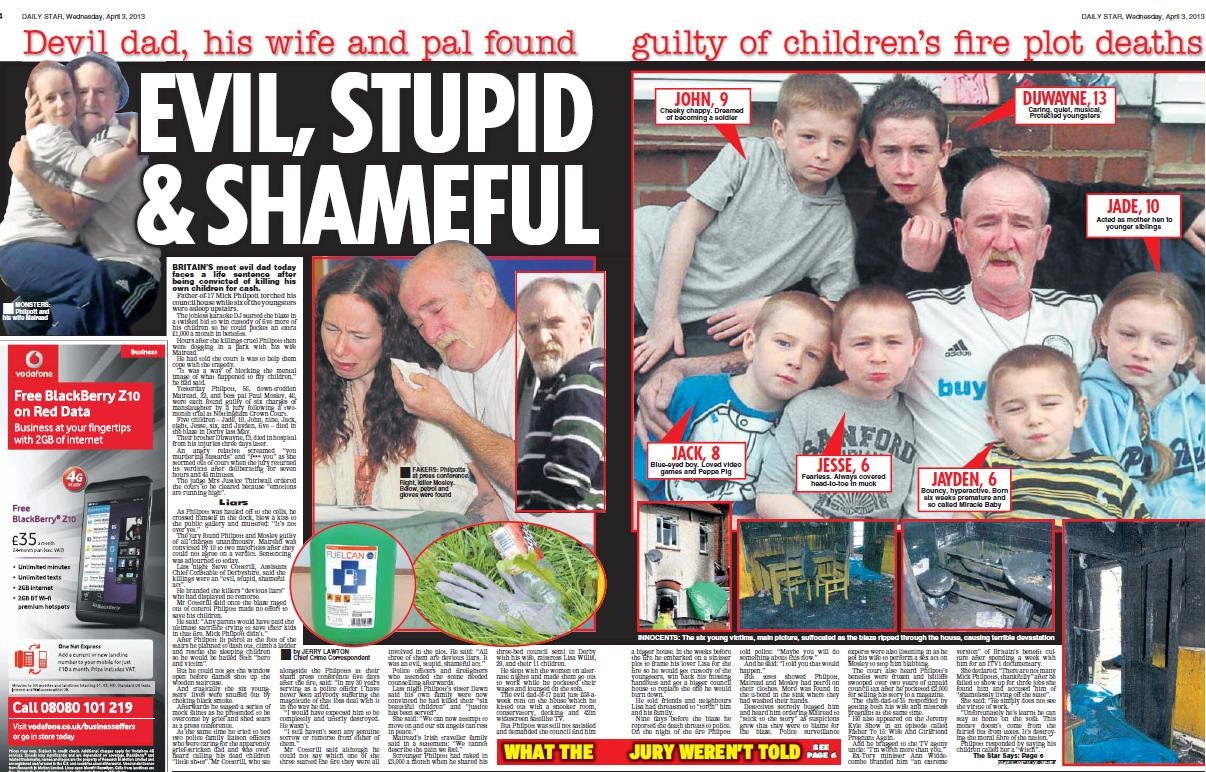 It has the same picture as on the front of the Mail. But a caption is placed next to each child, with their name, age, and a little biography. Jack, 8, loved video games and Peppa Pig. John, 9, dreamed of becoming a soldier. Jade, 10, acted as mother hen to her younger siblings. Empathy springs in the unlikeliest of places.

*Mind you, I’m writing this at 2am and going off the first edition: let’s not forget that its first edition leader after Anders Breivik’s rampage (before the killer’s identity was revealed) called for a clampdown on Muslim immigration, so it has been subject to change…