Last night, Bristol was on fire, as police battles raged through the Stokes Croft area of the city. Hundreds were on the streets, fleeing baton charges, tearing up cobblestones and flinging them at police.

So far the mainstream press has reported only the official line on these events, which tens of thousands of people from across the world watched unfolding live in the small hours of the morning as locals tweeted reports and uploaded video footage directly from their phones. “They’re rioting in Bristol at 3am on a Thursday,’ wrote one Twitter user. “I remember when young people in this country used to be apathetic.”

Across the country a growing wave of squatted communities and occupied social centres is facing eviction and persecution by local authorities. Last night it was Stokes Croft’s turn. “Ten years ago you probably wouldn’t have wanted to walk through this area at night,” said a local student, Sam Barnard, 21, who spoke to me over the phone from the middle of the riots. “But recently community projects like ‘the People’s Republic of Stokes Croft’ have been helping to develop the area. Buildings have been revamped and pubs and shops are encouraged and nurtured.”

Yesterday afternoon, Avon and Somerset police moved in to disperse a long-running protest against a new branch of Tesco, whose appearance, in a community which is rebuilding itself with the help of small businesses, had been contested by 95 per cent of local residents (update: this figure should be 90 per cent). 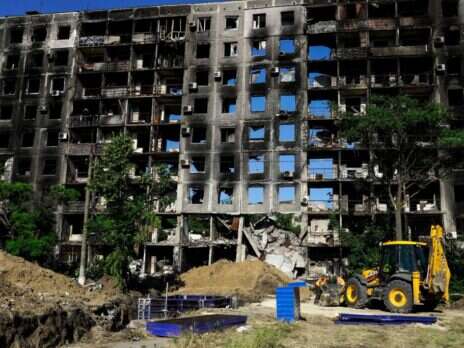 There are already 31 branches of Tesco in Bristol, but when this one opened last week, locals staged a peaceful sit-in protest in front of the doors, holding placards and distributing free home-cooked food to passers-by. “There was already a lot of politicised community activity in the area when it was announced that an eviction was to be made on the Telepathic Heights squat,” said Sam.

Telepathic Heights is a long-running building occupation that young squatters had restored and covered in colourful graffiti, and which was one of the hubs of the Stokes Croft community.

The trouble began at 9.15pm on 21 April, when police sealed off Cheltenham Road and moved in to evict the squat. Police involvement in such evictions is normally a last resort if baliffs fail to break through, but this time they had search warrants based on what Superintendent Ian Wylie, leading the operation, called “intelligence received about the criminal intentions of those who were occupying the building”.

Four people were arrested, and police have released a statement saying that they found petrol bombs at Telepathic Heights, although Stokes Croft residents dispute this.

Soon after the eviction began, almost 200 police in riot armour arrived from local and Welsh constabularies, and the streets of Stokes Croft were rammed with riot vans.

The situation escalated quickly. Hundreds turned out in support of the squatters, who are well liked by the community, and the protest quickly incorporated local grievances against the Tesco, which is directly opposite Telepathic Heights.

Scuffles and fights broke out, and witnesses say that people began to sit down in the road, with police dragging them out of the way. Music began to play, and Stokes Crofters danced and chanted “Whose streets? Our streets!”

After the pubs turned out, more people turned up to join the ruckus. “There were a lot of drunks,” said “Sarah”, who lives near the Telepathic Heights squat (she asked me not to give her real name). “This was a totally spontaneous protest. It tapped into the tension that the area has felt since Tesco opened, a fear of gentrification imposed by the council. There were masked up, clued-up activists, myself included, but the majority were young people from the area who were up for kicking off and wanted the police to leave.”

More than anything, it seems Stokes Croft residents wanted the police out of their neighbourhood, perhaps the most organic recent display of the anger and mistrust that many communities feel towards officers of the law.

This anger has come to a head in recent months after repeated high-profile reports of police violence against anti-cuts protesters. Some marginalised groups across the country, who have always suspected that the police are not on their side, are now prepared to fight them, given the least opportunity.

As the night wore on, barricades were set up, running battles began, and bottles from the recycling bins that line Cheltenham Road were flung at the police.

Officers seemed to hang back where they could, but used their batons ferociously whenever they came into contact with the rioters. From just before midnight, a local resident going by the Twitter handle @grantikins began to live-stream a video broadcast of the events from his mobile phone, and soon thousands of people, following the hashtag #stokescroft, were watching and discussing the action online.

The picture was jerky, but the sound was perfect: over the noise of screaming helicopters and smashing glass, you could hear a lone saxophone player’s thick, mournful rendition of Gershwin’s Summertime. Around 1am, protesters began to smash up the new Tesco.

“From when I got there the police were formed up on the main road next to the club Metropolis, and they were surging forwards to drive protesters down towards the centre. The standard bins had been set ablaze and smashed glass littered the streets, people were singing and dancing in front of the police lines,” said Sam Barnard. “At Tescos, protestors had managed to get the shutter raised enough for some people to crawl underneath.

“When the police moved in, a teenage boy was in the process of crawling out under the shutter, flat on his belly, when the police got to him.  Although he was unable to leap up and run, the police proceeded to hit him repeatedly on the head with batons before dragging him out, bundling him into a police van.” (The police said today that their “robust” operation was “fully justified“.)

“Out of the corner of my eye I saw something large flying through the air and realised a rioter on the roof had found a large concrete block and thrown it, hitting an officer quite squarely and knocking him to the ground,” said Sam. “After that, the mood changed. The music which had been playing was instantly turned off and people backed away a bit. I think there was a general consensus that hoofing a massive slab of concrete off the rooftops at the police was a step too far.”

“Unsurprisingly afterwards the police were in a much more aggressive mood,” he added. “The police started to use their shields very aggressively, and there were a lot of head injuries,” agrees Sarah. Eight police officers and numerous protesters were hospitalised, although none were critically injured.

What happened in Stokes Croft has stirred up Britain’s growing anti-cuts and anarchist movements, with supporters travelling from across the country to Bristol today. It looks like it’s going to be a long, hot summer.

This video footage shows one local resident with his face and neck encrusted with blood, cursing at the police.

“What happened to you?” asks the cameraman.