New research shows that the UK, and the world, are not ready for a new era of data-driven technology. Given the speed and magnitude of change, in a world already reeling from economic, political and health crises, organisations that seek an edge now will have an advantage going forward. And in a Data Age driven by artificial intelligence, automation and emerging data-driven technologies, the defining edge will be how we turn our data into quick, decisive action.

New global research commissioned by Splunk found the vast majority of respondents were unprepared for – and sometimes unaware of – the magnitude of data about to multiply their already overwhelming volumes. The research, by TRUE Global Intelligence, provides a snapshot of an interesting intersection of fear and faith. On average, organisations expect their data to increase nearly five times by 2025. Realising that, only 14 per cent of respondents expect their organisations to be prepared to handle that wave of data.

Yet when considering likely contributors to that stark increase – emerging technologies including 5G, edge computing, augmented reality and artificial intelligence – respondents become optimistic: 63 per cent say they expect their organisations to successfully take full advantage of the opportunities that these technologies present.

But this is the era of Covid-19. Is a global economic meltdown the right time to be thinking about future horizons? Actually, yes. A chaotic economic downturn is exactly when the next generation of leaders begins to emerge. When both Bain and the Harvard Business Review examined business performance after the recession of 2008, the data showed that agile, adaptive organisations that focused investment on key initiatives, rather than burying their heads until the crisis had passed, were more likely to survive and thrive in the upswing.

To forge a “New Britain”, Labour must rethink our economic system 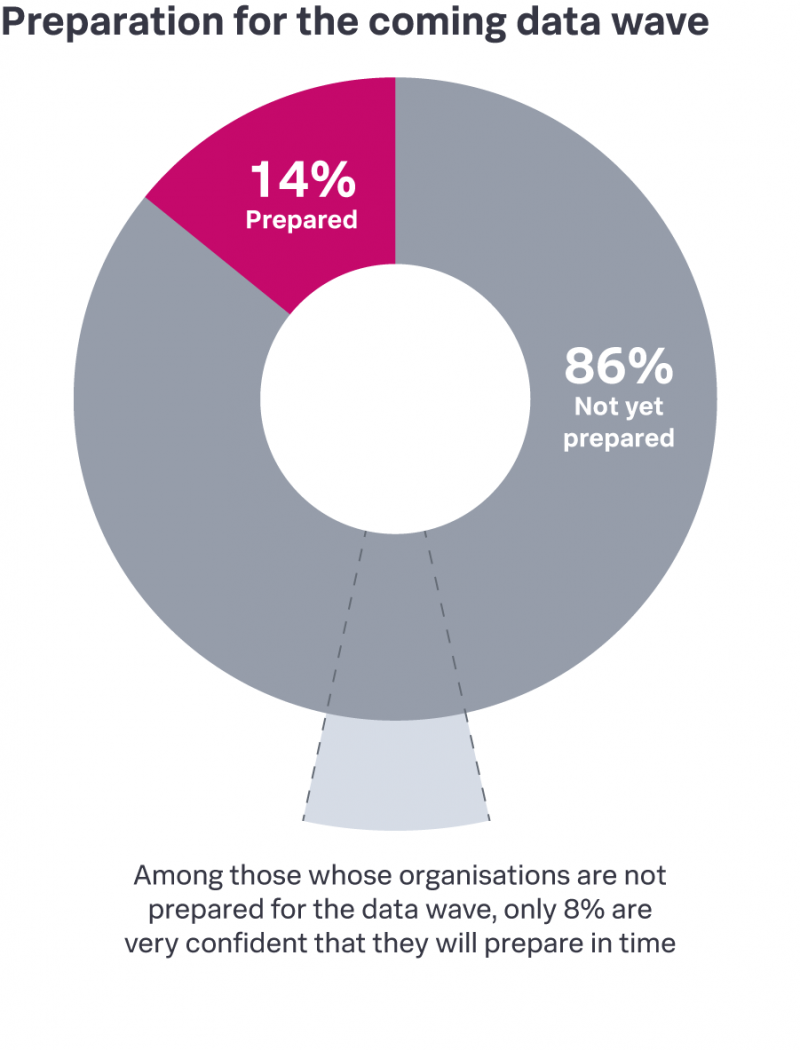 It will take a new style of data-driven leadership requiring collaboration, curiosity and courage to cross the chasm between underprepared and leading edge, and the research report provides key opportunities to prepare for a new age of data, and to thrive in it.

After 25 years of digital transformation we are entering a new stage. This Data Age is not the result, simply, of the zettabytes of data we are generating every year. The measure of the Data Age is in how we are capitalising on this information. We are increasingly moving it out of the silos and task-specific applications that characterized initial digital transformation, to take a more holistic and investigative approach.

This interconnectedness is the essence of the Data Age. We see it in our daily lives: with 5G and smartphones, we hold in one hand vast swaths of the world’s cumulative knowledge, the ability to communicate instantly with total strangers and our closest loved ones, access to our work, to healthcare, to entertainment and the arts, to the offices and tools of civic engagement. With laptops, wi-fi and cloud-based servers, whole enterprises shifted overnight from corporate campuses to working from home.

In the Data Age, we see the individual innovations of digital transformation come together to change entirely, not incrementally, the ways in which we work, shop, consume and create. And central to this new phase is the potential of artificial intelligence, to draw unprecedented insight from new waves of data, and to accelerate, through automation, our response to those insights. Access to information and knowledge combined with the next wave of technology innovation means businesses are only limited in their imagination in how to bring the next experience to the consumer.

As we have found with previous research, business and IT experts in the United Kingdom place near or above the global average for all things data. Sixty-two per cent of UK respondents expect data to grow over the next five years. They estimate that their data will grow 4.8 times from where it stood in late 2019, exactly the average of the eight countries in our survey. In the United States, the estimate was 5.2 times, and in China, 3.9 times.

UK respondents voice considerable optimism about emerging technologies, though implementation lags. For example, just 19 per cent of UK respondents say they are currently using artificial intelligence and machine learning technologies, but 58 per cent look ahead to future use cases. For another essential Data Age technology, 5G telecommunications, less than half of UK respondents feel ready to go: only 44 per cent rate their own understanding of 5G as “expert” or “high”. But that again exactly tracks the global average, and falls just a point below the US number. Respondents in China, by contrast, scored themselves at 62 per cent.

As interesting as it is to compare the eight countries in the research (which also addressed France, Germany, the Netherlands, Japan and Australia), or compare one industry’s progress against another, the real competitive question is between companies in specific industries. Which logistics firm will solve supply chain problems with AI and Blockchain? Which bank or retailer will automate its responses to a data security threat? Each new technology represents a disruptive threat and a competitive opportunity. And the current disruption will sharpen the divide between leaders and laggards. Customers are no longer loyal to brands but crave exceptional experiences; industry leaders understand that data is the key to providing this.

Even as organisations cope with the demands of coronavirus mitigation and the fallout of the economic downturn, forward motion remains essential. The Data Age report offers a number of strategic recommendations, but there are two fundamental first steps: to understand your own evolutionary strategy – the strengths and opportunities that must be your focus – and to focus, holistically, on how your organisation works with data. From IT operations to machine learning engineer to business end-user, each member of your organisation needs appropriate, role-based access to data and the tools to learn from, and act on, it.

And keep your eye on that sharp data growth. One of our survey respondents, a director for a UK manufacturing firm, said this: “Ensure that you discuss accelerated data growth at every meeting. Keep it on your agendas. Ensure that you have people and processes in place to advance your data preparation.”

We are in a new era, in which every challenge and opportunity will revolve around data. A big surprise in our research was that respondents in every industry sounded overwhelmed, even pessimistic about their immediate prospects around data, AI and other technologies. But when we asked which industry – retail, financial services, manufacturing, healthcare or the public sector – was best poised to thrive in the Data Age, most respondents chose their own. I think they are right.