1. Was Gavin Shuker’s Extra Hot chicken “like tackling a ferociously fiery dragon in a furnace?”

3. Is Chuka Umunna’s apparently Medium burger a comment on the Third Way? 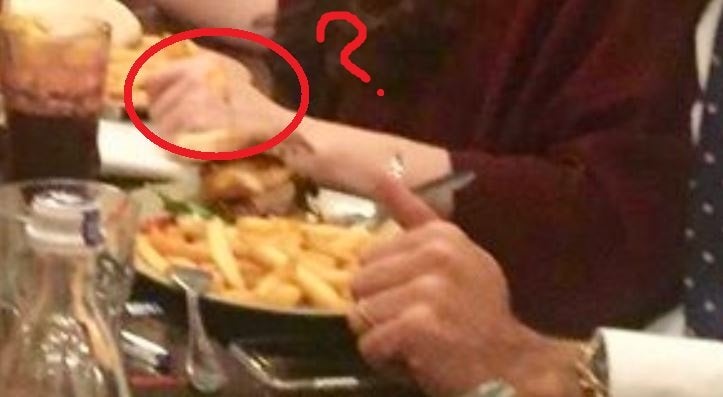 4. Is Heidi Allen’s Wing Roulette a symbol of this group’s maverick risk-taking?

6. Is Anna Soubry’s salad and chips an example of having her cake and eating it?

7. There’s only a bottle of red on the table, despite Angela Smith’s glass of white. Was there a tussle over which colour most wine drinkers wanted?

11. Didn’t he realise you have to order at the till? Did no one tell him?

16. Or do Angela Smith’s pursed lips reveal the Lemon & Herbist of the group?

17. Did everyone go up and order separately?

18. Or did some people save the table, or stay to keep other table-sitters company?

20. Is anyone seething over a side they paid for but didn’t get to eat? Macho Pea rage?

21. There are around four glasses of what looks like Coke on the table. Have they not heard of bottomless refills?

23. What kind of fiscal credibility is this?

24. What happened after this photo was taken?

25. If they didn’t share one pot of the bottomless frozen yoghurt between 11 then this country’s going to the dogs.

28. Ian Austin at a loose end? They are mid-chew, after all, suggesting a certain hostility from the phone wielder…

29. Why did no one invite Lucy Powell?