No young people support the Conservatives, goes the claim. And it’s not just that we can’t imagine the Matt Hancock MP app leading the next tech revolution or because of Michael Fallon’s rubbish Instagram pics. 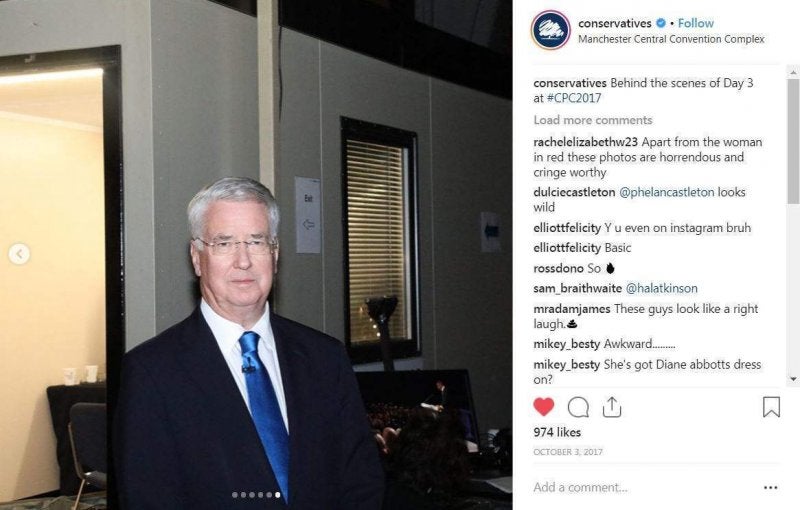 Lest we forget. Photo: Instagram/conservatives​

The polling proves it. According to Queen Mary University’s survey of UK party members, 44 per cent of card-carrying Conservatives are aged 65 and over (compared with Labour’s 29 per cent), and according to YouGov, the tipping point at which a voter is more likely to have voted Conservative than Labour is now the age of 47 – up from 34 at the start of the election campaign in 2017.

But the Young Conservatives have been keen to counter that at their party conference this year, showing off events attracting young people:

“No young people support the Conservatives”

This was the queue for our reception event last night – judge for yourself. pic.twitter.com/CJrsNTCAq6

The Telegraph’s Christopher Hope has similarly reported that more young people are turning out to fringe events than the bigger picture would have you believe, tweeting that “away from the TV cameras, the fringe meetings are buzzing and rammed with 20-somethings talking about new Tory ideas”.

But one Tory MP is less than enthused. Anna Soubry, who has served both as a business and defence minister before becoming a backbench scourge of the Brexiteers, doesn’t much like the thought of these youngsters supporting her party.

“The problem is they all look and sound like mini Moggs…” she tweeted.

The problem is they all look and sound like mini Moggs …. https://t.co/JgTdhntgVq

Considering the Conservatives’ big challenge is attracting young people to their party – to rival the way Corbyn’s Labour and the membership network Momentum have inspired a wave of young activists – mocking the youth who are supportive won’t go down well.

The problem for the party is that Soubry has a point. While the cliché of “mini Moggs” (evoking images of braying young men in three-piece suits and monocles) is exaggerated, when some young Conservatives did try to create a youthful cultural movement around the party, separate from its official apparatus (Momentum-style), it spectacularly failed.

Activate had a horrendous launch with cringey memes, a Twitter hack, and a Guido story about young Tories making comments about “gassing chavs” in a WhatsApp group.

The group was disbanded after less than a year with campaign director Sam Ancliff shutting it down because “99 per cent of the workload was me, and I am tired and no one was willing/able to replace me. I was literally doing nine hours day job, nine hours Activate each day”, as he revealed on Reddit.

According to Ancliff, there were 1,573 members at the point of the group’s suspension and “the problem was maybe five per cent were actually engaged enough to do anything and there certainly wasn’t enough with the time, ability and desire to take over running the organisation”. So he concluded: “I would rather it die with dignity with a quick death than die slowly and painfully.”

But Momentum managed. This suggests “cool” young people – who perhaps haven’t been previously involved in politics – to organise festivals and parties and help the leadership out both with their image and their canvassing are in short supply for the Conservatives. The “mini Mogg” problem isn’t a rogue Tory MP attacking her own party; it’s a sorry sign of its future.