Through SNP eyes, Boris Johnson’s visit to Scotland resembled nothing so much as a scene from Blackadder: heavily powdered and bewigged, a feckless aristocrat and his court trundled north in a gilded Brougham filled with giggling and groping, and with one watchful eye on the window: “We’re facing a horde of ginger maniacs, with wild goats nesting in their huge orange beards, or, to put it another way, ‘the Scots’.”

There is purpose to the SNP’s portrayal of Johnson as an unwelcome and unserious guest. The PM is being “othered”, with considerable effect. His poll ratings north of the border hover around sub-zero; for much of the past year he has found himself reduced to being the Prime Minister of a distant, unreachable England; an Etonian fop, he is not “one of us” but “one of them”.

Though, it must be said, he doesn’t help himself. He is, after all, the PM most likely to lose the Union. David Cameron and Theresa May had their flaws, but neither were as precision-engineered to raise Scottish hackles.

Nicola Sturgeon rarely misses a chance to take the moral high ground. One felt that if she could have got away with banning Johnson’s trip to a Covid-19 testing lab in Glasgow she would have done so. “We are living in a global pandemic and every day I stand and look down the camera and say ‘don’t travel unless it is essential, work from home if you possibly can’ – that has to apply to all of us,” she said. “People like me and Boris Johnson have to be in work for reasons people understand, but we don’t have to travel across the UK. We have a duty to lead by example.” 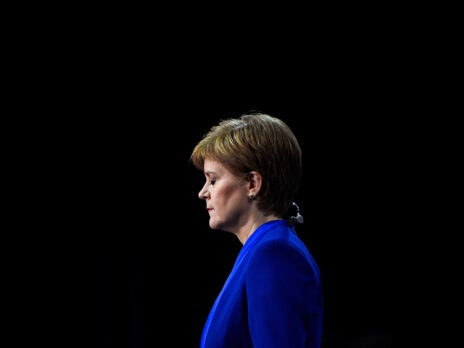 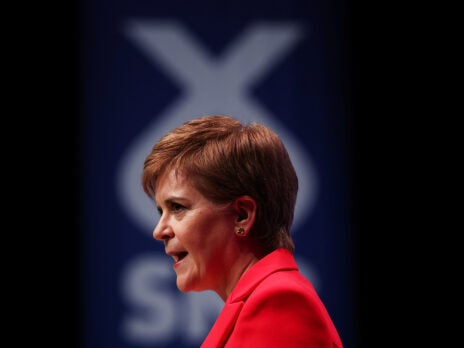 Supreme Court defeat should be a signal for Nicola Sturgeon to move on, but she won’t

It’s not clear whether the First Minister was worried about the PM bringing germs to Scotland or vice versa. Absent the tribalism, it is hard to get worked up about the safety aspects or to believe people would somehow be inspired to breach the rules. Even Keir Starmer voiced his support for Johnson, saying: “Obviously, I’m his opposite number, but I’m going to defend him on this. He is the Prime Minister of the United Kingdom. He needs to know what’s going on, on the ground. I think that’s a perfectly legitimate thing for him to do.”

[See also: Paul Mason on why the English left should not stand in the way of Scottish independence]

What might concern Sturgeon more is that Johnson arrived in Glasgow with a bag of gold, and on Scottish budget day. The latest Downing Street strategy for persuading the increasingly independence-minded Scots to stay put is to spend, spend, spend. Repatriated EU structural funds will not be passed on to the Scottish parliament, as was previously the case, but will instead be deployed by the UK government through a new Shared Prosperity Fund, and on projects normally devolved to Holyrood such as infrastructure and even education.

This is, of course, low politics more than high principle. Johnson’s administration feels that its vast spending across the pandemic has gone largely unnoticed by Scots, who have taken their lead from Sturgeon rather than Downing Street. With a devolved Scottish election due in May, bringing with it the prospect of a second independence referendum (whether authorised or “wildcat”), there is an urgent need to communicate the role the UK’s deep pockets play in supporting the Scottish economy, and to re-establish Westminster’s legitimacy.

Johnson attempted to do so in his speech before today’s visit: “The great benefits of cooperation across the whole of the UK have never been clearer than since the beginning of this pandemic. We have pulled together to defeat the virus, providing £8.6bn to the Scottish government to support public services whilst also protecting the jobs of more than 930,000 citizens in Scotland.

“Mutual cooperation across the UK throughout this pandemic is exactly what the people of Scotland expect and it is what I have been focused on. The people of the UK have stood together during this pandemic: from our doctors and nurses in our hospitals to our shop workers, scientists, lorry drivers and teachers – working together as one truly United Kingdom is the best way to build our Covid recovery.”

It was both a plea for unity and a warning. It could be pointed out that Scots pay their taxes like everyone else, and contribute to British spending, and will help repay the debts that are being racked up. But it is also true that through the Barnett formula Scotland gets more from the Union than it puts in. The question is, do Scots still think that membership of the United Kingdom is worth it?

As the jibes about Johnson’s visit flew back and forth across the Holyrood chamber, Finance Secretary Kate Forbes outlined the Scottish government’s budget for the year, delivering whichever limited bribes she could find. There will be no change to income tax rates, public sector workers earning up to £25,000 will receive a pay rise of at least 3 per cent (as opposed to the freeze planned in England), and local authorities will be given £90m so they can avoid raising council tax.

The Scottish government, like every other, is constrained by the demands of Covid-19, and is also having to operate unsighted due to Rishi Sunak’s heavily delayed Budget, which will have implications for Scotland and could well force Forbes to change her plans. This is an ongoing source of tension between the SNP and the Treasury.

What is certain is that the issue of economics was decisive in the 2014 independence referendum. Unionists hope the same will be the case in the event of a second vote, but the polls suggest Scots are starting to rank sovereignty above money, as England’s Brexit voters did in 2016. For this reason, we are likely to see more, not less, of Boris Johnson and his bag of gold before May’s election arrives.

[See also: Will Scotland vote for independence? Our poll tracker]