Anyone living in the west London suburb of Ealing knows of the Mattock Lane protesters. On a quiet road, lining a park and home to an amateur theatre, they stand outside the Marie Stopes sexual health clinic murmuring, shouting and praying (sometimes on their knees), and bearing graphic images for everyone to see.

Growing up in nearby Acton, I knew – as did everyone I knew – many in Ealing who had used the clinic over the years. For free condoms, mainly. But also for sexual health and contraception advice. For the morning-after pill.  For chlamydia testing kits. And for abortions.

No one visited without having something to say about the protesters outside. References to them have even appeared on Facebook meme pages about the area, so ingrained are they in the local consciousness.

So when Ealing Council made a historic decision last night to create a “buffer zone” around the clinic, to avoid women having abortions being “harassed” and “intimidated” by the campaigners or subjected to their “vigils” – as they have been for over two decades – it was a victory for the borough. The anti-abortionists deny harassing women, claiming they offer to “counsel” them by providing an alternative path.

Why it’s a dangerous myth to claim that only 17,000 people died of Covid

Councillors are implementing a Public Spaces Protection Order (PSPO) around the area, to avoid women coming into contact with pro-life images and protests.

Women walking in and out have reportedly been recorded and photographed, offered teddy bears, foetus dolls and crucifixes, and handed pink or blue rosaries to denote the sex of their unborn child.

Residents have also reported shouts of: “Don’t kill your baby”, “Mum – I just want to talk to you”, and “Mum – think about your lifestyle”.

The protesters have also been accused of blocking the entrance, and approaching women and other residents passing by directly in front of the clinic.

“I’ve seen women run out of the clinic, literally, because they just need to get away,” says Binda Rai, a Labour councillor for Walpole ward, where the clinic is based.

“I’ve never been through an abortion but I’m the mother of two children, and I cannot imagine how horrific a decision it is for any woman to make,” she says. “They must be at such a vulnerable point in their lives, and then to be confronted by strangers at the point of access, asking you not to go through with the decision you’ve made, must be heart-rendering for them.”

Now, neither pro-life nor pro-choice activists are allowed within 100m of the clinic, although there will be a small “designated area” set away from the site for both groups to protest, in order to preserve freedom of speech: 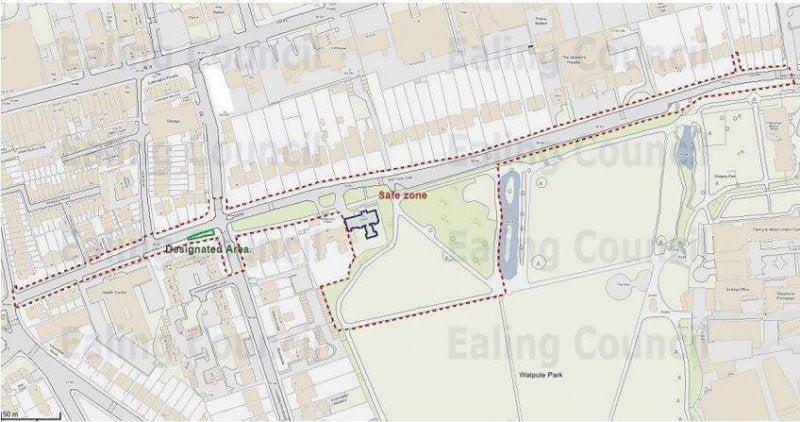 A map of the “safe zone”, from Ealing Council’s consultation.

The Council came to this decision following an unprecedented response to its survey on whether to “buffer” the clinic. Over 3,600 people gave their opinions, and, according to the council’s director of safer communities and housing Mark Wiltshire, the response from locals was overwhelmingly in favour.

“In terms of people who were supportive, more than four in five people agreed with the proposal,” he tells me. Of the 2,181 people giving feedback to the online survey, 90 per cent were Ealing residents, whereas just over 6 per cent of those sending identical template letters against the move (organised by the campaign group Be Here For Me) were local – some even writing from America.

This weight of opinion was one of the reasons behind the Council’s unanimous vote. The council leader Julian Bell was quick to point out that while he was proud of “breaking the ground” and “leading the way”, this was a decision about “protecting women from harassment and intimidation”, rather than “a debate for or against abortion”.

Survey responses show that many objecting to the protesters do so because their young children are exposed to the traumatic images they display of dead foetuses.

“My kids have asked me about why those people are there, and thus extremely difficult conversations have been forced upon me and my family,” said one mother in the consultation, who has to take her five- and eight-year-old children past the protesters to get to the park or nearby shopping centre in Ealing Broadway.

“The protesters have tried to talk to me and to my children and I find this extremely intrusive and deeply upsetting.”

Another wrote: “The images are displayed on a public path, visible to children, women who may have had miscarriages, women with fertility issues – no consideration of the impact of these images on the wider public has been considered by the pro-life vigil holders.”

Women’s experiences of using the clinic have been highlighted by the local Sister Supporter campaign group, which began fighting two and half years ago for this outcome.

“We have seen women flee in tears after being called a ‘murderer’, the leaflets they [anti-abortionists] hand out claim possible side effects can be breast cancer, drug addiction and eating disorders,” says Sister Supporter’s co-founder, Anna Veglio-White.

“They often follow women leaving the clinic. This behaviour is cruel and intolerable, and as current harassment laws are currently insufficient to deal with this very nuanced situation, we took things into our own hands.”

Veglio-White, 25, says the so-called vigils outside the clinic have “involuntarily been a part of my entire life”. She tells me when she was growing up, “my mum would try and avoid walking past the clinic with us and if she did, she became upset – although we couldn’t fully understand why.

“As I grew up and began to understand the situation, and notice the plastic foetus dolls lined against the walls of the clinic and the ‘pavement counsellors’ blocking the gate, the injustice of the situation really began to weigh on me.”

These foetus dolls, as well as hate mail, have been sent to Rupa Huq, the local MP for Ealing Central and Acton since 2015, who has been campaigning against the “vigils” for years, having grown up in Ealing.

“It was since 2004, when I had to use Mattock Lane for the baby clinic, etc, that I became acutely aware of the aggressive tactics of protesters putting dolls and foetus pictures on the pavement,” she tells me. “I have seen them since, when taking children to Questors Youth Theatre [the theatre opposite]. It’s made me shudder.” 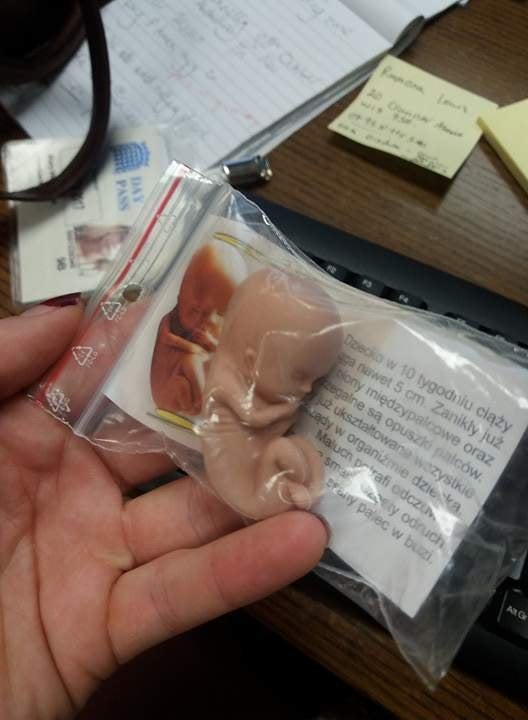 “As an MP, I’ve had complaints from the public and met with staff inside [the clinic] who find they are name-called on the way to work and can hear hymns and chanting from within building,” she reveals.

Huq is urging the government to adopt Ealing’s breakthrough as a national measure. “Ealing Council is courageous in taking this step but not all the burden can fall on overstretched local government,” she says. “I have been raising the same issue with Home Secretary Amber Rudd – who has a similar clinic in her seat – to follow Ealing’s lead build and establish a nationally applicable solution.”

After coordinating a letter supporting the proposals, signed by more than 113 MPs from across parties, including the Labour leader Jeremy Corbyn, Huq is waiting for a national consultation by the Home Office to report back. She has repeatedly asked Rudd in the Commons about family planning clinic buffer zones.

Other councils, including Portsmouth, Manchester, Richmond and Southwark, have passed motions to consult on the subject. Lambeth Council has undertaken a public consultation and is yet to make a decision, and Birmingham City Council discussed a similar motion last year.

Yet replicating “safe zones” countrywide won’t be straightforward, warns Councillor Rai. “It’s a really difficult area for any local authority to tackle,” she says, partly because existing laws against harassment are tough to bring against protesters when they often only encounter the women once or twice. “Also these vulnerable women just want to be in and out – they don’t want to be reporting it to the police.”

“The PSPO is the best tool at the moment we can use, but it isn’t a long-term solution because it only runs for three years… and then we’ll be in the same situation where we have to prove there’s a need for it.” she adds.

“[The government should] look for a national solution to protect women throughout the country, not just those women who are fortunate enough to be protected by their local authority.”